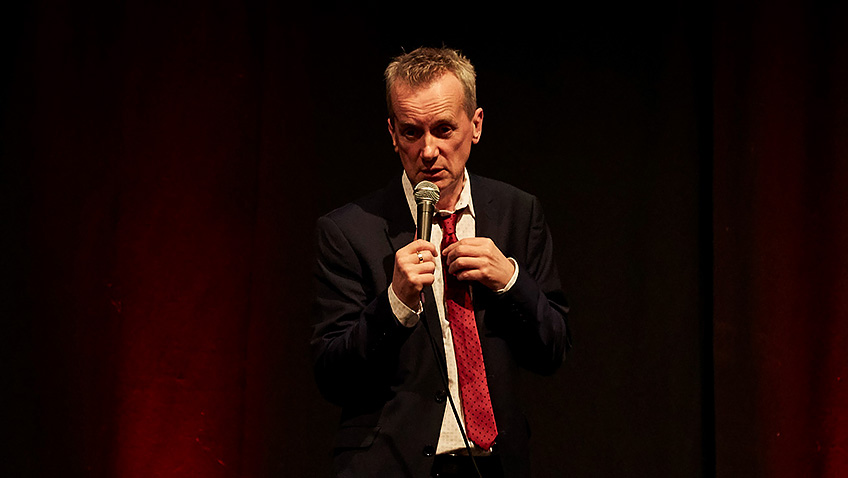 Frank Skinner charms the audience with his laid-back humour

Frank Skinner has been touring the UK in 2019, his first tour in five years. His huge popularity on television and radio has meant full houses all the way. He now has a five week stint in London.

His entertainment career began in the Edinburgh Festival Fringe in 1987. Four years later he went back and won the Perrier Award, beating off fellow nominees, Jack Dee and Eddie Izzard.

The show is billed as Showbiz which is strange since razzle dazzle is definitely not what this one-man show and his relaxed, leisured-paced performance is all about. Man in a Suit is a more appropriate title.

But first there is a warm-up by South African comedian Pierre Novellie who makes observations on Brits’ eating habits and then there is a 15 minute interval before Skinner appears.

Skinner has an amusing story to tell about Bruce Forsyth. Did you know Forsyth’s ashes are buried beneath the London Palladium stage?

Forsyth didn’t like other comedians and he didn’t like them getting a lot of laughter and a lot of applause. His ashes must be turning in the urn every time a comedian walks on to the stage.

Skinner is 62 going on 63. He talks about getting older, his bad shoulder, his teeth, his penis and his failing libido. He also talks about his relationship with his wife whom he adores and praises to the skies and is so delighted when she goes away for a few days. One of the high spots is telling what happened to him when she went into labour.

He has some good points to make about Strictly Come Dancing, Royalty, lavatory hygiene, the conga and its all-male version, the daisy chain.

The best moment must surely be his fantasising about a man who boards a bus with an empty wheelchair. He thinks of five different versions and all of them are hilarious. The script deserves to end up in an anthology of comic prose.

Skinner charms the audience with his laid-back humour.