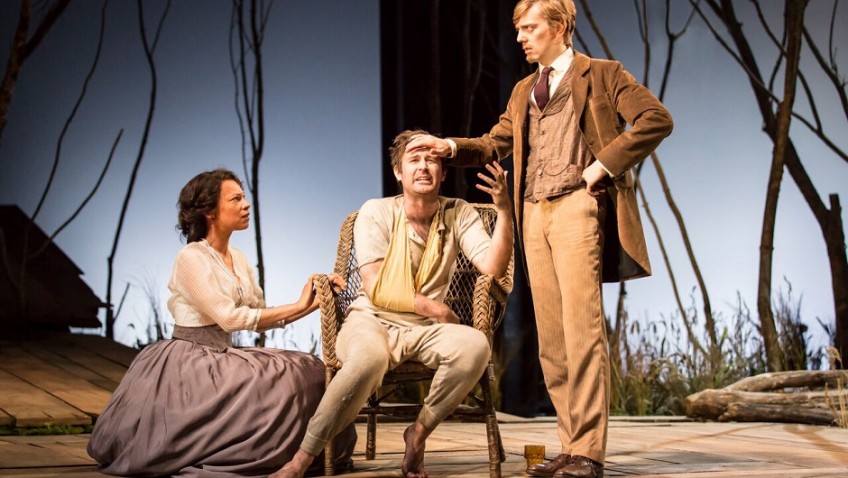 One of the exciting things about the Young Chekhov season is that it allows audiences to see the rarely staged Platanov which Chekhov wrote in 1881 when he was a 21-year-old university student studying medicine. It was not discovered until 1920 and not performed in Russia until 1960. The rough draft, a wild, unwieldy, sprawling, a mixture of tragedy, comedy, crude melodrama and farce, set in provincial Russia in the 1880s, lasts six hours.

Cut now to 2 hours and 40 minutes by David Hare and acted by a fine ensemble in an excellent production directed by Jonathan Kent and beautifully designed by Tom Pyne, you may wonder why Platonov has not been revived more often.

Platonov, a 30-year-old schoolteacher, a compulsive womanizer, cannot forgive himself for wasting his life.  He rails against bourgeois mediocrity, lashes out, insulting everybody.

Women find him irresistible. Two women want to run away with him: a widow (Nina Sosanya) who owes everybody money and refuses to pay her debts and an old flame from the past, now unhappily married (Olivia Vinall).

Meanwhile a colleague (Sarah Twomey) takes him to court for assault and his poor, loyal wife (Jade Williams) attempts to commit suicide twice.

James McArdle, a charismatic charmer, has a very amusing scene when Platanov is asleep on a mattress in the schoolroom in his dirty long johns and is besieged by two lovers and his wife.

“I don’t want to be happy,” he says to his wife, attempting to put things right between them and reassure her of his love for her. “I want to be with you.”

McArdle’s wonderfully funny performance in a great comic role is not to be missed.

Platanov is part of the Young Chekhov trilogy, which includes Ivanov andThe Seagull. See one play and you will want to see the other two. On Wednesdays and Saturdays you can see all three plays in one day.