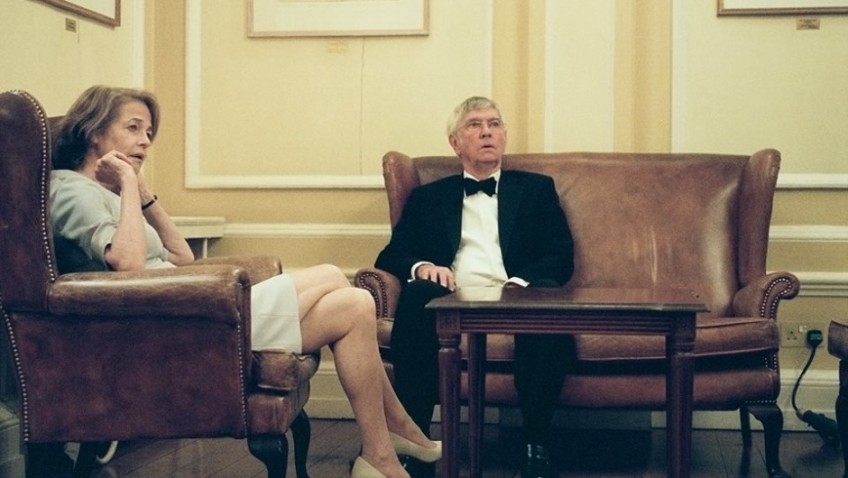 45 YEARS (Curzon). In the Norfolk broads a retired teacher and a retired works manager are about to celebrate their 45th marriage anniversary when they learn that that the body a woman who died in an Alpine accident in 1962 has been found totally preserved in a glacier. The woman was the husband’s girl friend. The news deeply disturbs them both. The wife until now had never heard of the girl. What will the new knowledge do to their marriage? How true was/is their love? Writer/Director Andrew Haigh and the actors (beautifully understated, in-depth, grief-stricken performances by Charlotte Rampling and Tom Courtenay) leave you to decide what the outcome will be. The film, complex, serious and adult, will resonate for many. It deserves an award for Best British Film.

EX MACHINA (Universal). Alex Garland’s intelligent, classy and superior futuristic psychological thriller asks what will happen when artificial intelligence robots have minds of their own.  A young and bright computer coder (Domhnall Gleeson) wins a competition and is dispatched to a mountain retreat where he finds his job is to test a state-of-art female A1 robot which has been created by a modern Bluebeard (Oscar Isaac) who has lots of glamorous prototypes in his cupboards. He also has a Jason Pollock and a Gustav Klimt on his walls. Can the sexy A1 robot (lovely Alicia Vikander) think and feel like a real woman? Can she seduce the computer expert?

3 ½ MINUTES. TEN BULLETS (Dogwoof) is a riveting documentary by Marc Silver which raises racial and legal issues which need to be addressed. Guns are very easy to come by in the US; in fact here are more guns than people. In 2012 an unarmed teenager was murdered by a white middle-aged man when he did not turn off the over-loud rap music he was playing in his car whilst he was in a petrol station. The accused claims he thought the teenager had a gun and that he had a right to shoot in self-defence. Will the jury therefore condone the killing? Will Americans ever change their gun laws?

MAD MAX: Fury Road (Warner Brothers). Civilisation has collapsed and water is in short supply. The warlord’s five wives have escaped from the baby factory.  “I’m fire and blood,” says Mad Max (Tom Hardy) whose face is for much of the time in an iron mask. “I’m running away from the living and the dead,” he says, racing across the desert wasteland in a petrol tanker, (driven by tomboy Charlize Theron) and accompanied by the absurdly over- glamorous wives and a bald, chalky-white, emaciated Nicholas Hoult. They are hotly pursued by the warlord’s men in cars and on motorbikes. Gary Miller directs the action. Did I say action? I did. It’s action and nothing else. The acrobatics, explosions and production values are amazing.

CONCUSSION (Sony). The National Football League attempts to silence Nigerian forensic psychologist Dr Bennett Omalu when he declares football causes brain damage and that God did not intend man to play football. Omalu, an expert and decent man, with impressive credentials, proves that America’s most popular sport can lead to neurological deterioration and psychological breakdown. He publishes his findings in a journal. It’s a good role for Will Smith; but the film lets the powerful NFL off the hook. Albert Brooks gives solid support.

STRAIGHT OUTTA COMPTON, (Universal) F Gary Gray’s biography of the rap group NWA (Niggaz With Attitude) is not a flattering portrait, emphasising, as it does, the violence and the debauchery, whilst recording their relationship with each other and with their white manager who seems to be a decent chap until you learn he has been ripping them off. Their anti-Establishment lyrics do not lead to good relations with the police. The confrontations are shockingly brutal. The film is not always easy to follow. It is dedicated to Easy-Z (played by Jason Mitchell) who died of AIDS related complications and it will appeal primarily to those interested in rap music.

LOVE (Artificial Eye). The DVD sleeve has the words filth, graphic, outrageous and visceral in large letters. So you can’t say you have not been warned. Director Gaspar Noe shows us actors having sex in twos, threes and in orgies and claims his film (shown out of competition at Cannes Festival) is showing us the sentimentality of sexuality. The sex is explicit, not simulated, and always in your face. Think how lucky you are that you are not in a cinema watching it in 3D. It really would be in your face then. It will be interesting to see if Karl Gusman’s constant exposure in close-up will further or hinder his acting career.