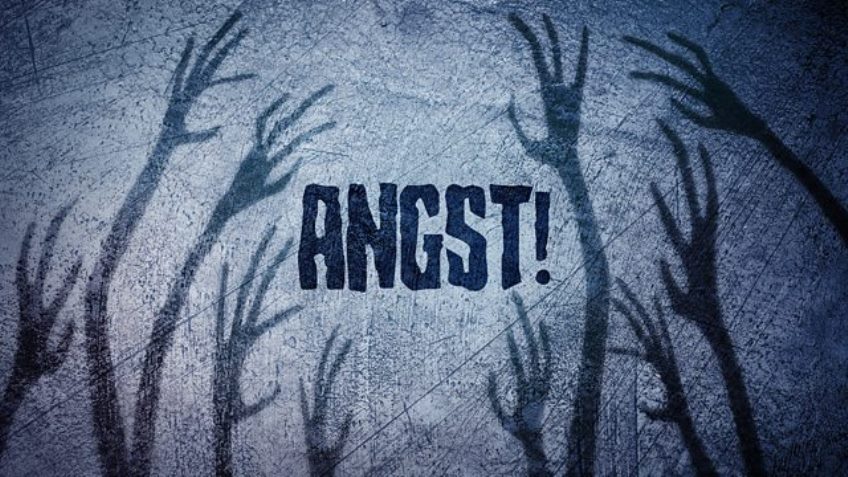 Just when we’re thinking we’ve had enough angst and anxiety in recent times to last us a lifetime, the BBC prove us wrong. In five, separate, compelling little dramas, collectively entitled Angst, we’re entertained, amused, surprised and intrigued very nicely indeed. Worries about real-life implications of the thought-provoking tales can be saved for another day – as long as there is one.

Packing interesting characters, intriguing stories, dramatic interactions and conflicts, intense sound effects, eerie soundscapes, dark humour, tension and suspense into just under half an hour is so impressive that slight shortcomings can be forgiven. Series creator, Martin Jameson, wrote three of the five episodes himself, and linking through all episodes, the cool, mysterious voice of enigmatic Timor Greer turns up in a variety of guises, mainly with a hint of underlying threat. Of course, like all good books and dramas set in a fictional time and place, it’s all too clear how fiction could so easily become reality once what we currently do in our world is taken just a few steps further. As we laugh or flinch, we also think: what if?

What if, like the lives of the inhabitants of Garwood in Marietta Kirkbride’s The Teachings of Smart Town, all our lives were entirely organised and controlled by the databanks and digital algorithms of GARY (the offspring, maybe, of a certain Alexa?)? Beloved GARY is revered as a god-like being, who knows more about each of them than they know themselves, but what happens when GARY fails, when cars and vehicles veer out of control, 30,000 washing machines whirr out an S.O.S., a single song (Smalltown Boy) blasts non-stop from every speaker everywhere, and devices go so wrong that individuals can no longer function, not even to feed the cat, let alone themselves? Who will the people blame for Gary’s mental breakdown? The system? The algorithm? Those who devise systems and algorithms? Or will they blame and punish the free-thinking, independent girl newly arrived in town, who sees GARY as a fascist automaton?

What if, to obtain British Citizenship in the real world, people like third generation Londoner, Naomi, could apply to fight each other as Avatars in a virtual reality game? In Poster Girl by Alex Stoker, a chirpy Graham-Norton-style host and amusing Avatars with names like Boudica Barbie, Easter Bunny, Woodland Elf and Poster Girl belie and glamorise the true brutality and ruthless barbarity of the games. For what happens to losers? Indeed, what happens to a winner’s family? And who are the real people behind the avatars? Failing to read small-print terms and conditions can prove fatal in the push to constantly fuel a public appetite for sick, hellish entertainment.

Plastic features Reese Shearsmith, an actor/writer frequently seen heading off down the dark side of sinister. That bacteria already actually exist in nature, whose enzymes feed on plastic, is wonderful as long as the plastic they gobble is unwanted, toxic waste. In the drama, a scientist has the good idea to replicate this plastic-eating enzyme in a lab, very securely, of course. But what if the enzyme self-replicates, and what if misguided individuals breach security to unleash on the world this potential force for good? What about the collateral destruction?

Again, what if Mother Earth, Gaia, were embodied as a sentient being, intent on ridding herself of a poisonous, parasitic virus that’s destroying her – the virus that is humankind? Might a wise refugee cleaner stop her? And what if the depressed, pathetic actor Hugh Dennis portrays in Actors were to sell himself to the Devil to land his dream role? With an ear implant feeding him every word he utters, might he even end up as a popular PM in a country led by an actor, blindly playing a role and delivering someone else’s script? But what if he’s not the only one who’s playacting? And who is it writes all the global plotlines and scripts? (NB: this is still fiction.)

It’s always worth having a satirical laugh at ourselves and our world as we get perilously closer to some, or even all, of these scary scenarios. With chilling spine shivers along the way and home-truths striking multiple targets, generous helpings of satire, humour, and jokes are served up, that encompass anything from impersonations of David Attenborough, Daleks and Arnie, to Judy Dench, Beethoven, Barnard Castle, Daniel Radcliffe, Thatcher, Blair and James Blount. Scary and sinister indeed!

The five episodes of Angst are available on BBC Sounds for over a year.