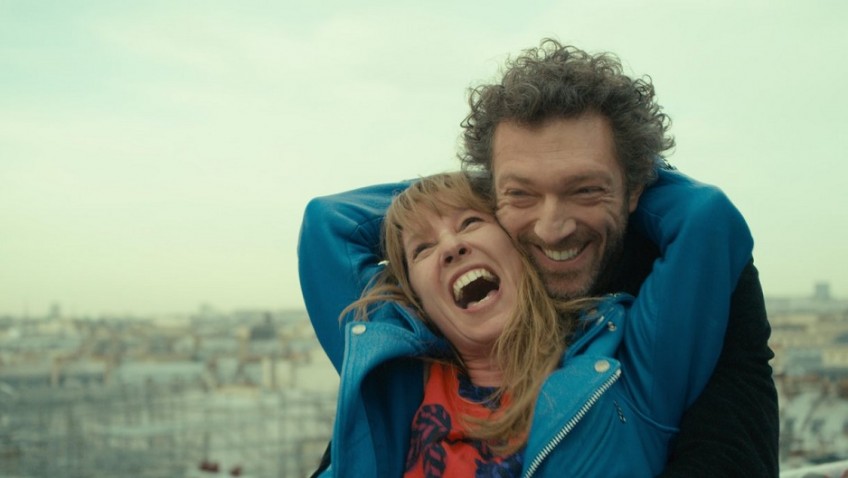 You’ll either love Mon Roi or find it very annoying

The beautiful French actress (Polisse, Léon, One Deadly Summer) turned-director (Polisse) Maïwenn Le Besco was once best known for her relationship with Director Luc Besson. She had a child with him at age 16, before he ditched her for a two-year fling with actress Milla Jovovich.  Then, in 2011, Polisse, which she directed and starred in, won the Jury Prize at the Cannes Film Festival.  And last May, Emmanuelle Bercot (Polisse) the co-star of Maïwenn’s latest film, Mon Roi, won the Best Actress award at The Cannes Film Festival.

Bercot’s co-star, the talented and dreamy Vincent Cassel, was nominated for best actor at Cannes, making this two-hander a dramatic powerhouse that you’ll either love or, well, will find annoying.  It might depend on whether you consider the film a passionate story of a couple in a destructive relationship or a tedious two-hour soap opera.

The film begins with a woman in her forties (Bercot) skiing down a slope as though determined to have an accident, preferably fatal. The woman ends up in a huge, well-equipped rehab centre by the sea (a bit like the setting of Rust and Bone) which is clearly symbolic. Healing her physical injury is not enough, so she looks back at her tumultuous relationship with Georgio (Cassel), the kind of man who has ‘not marriage material’ written all over him.

Dashing playboy and restaurant/property entrepreneur Georgio (Cassel) meets a far less glamorous lawyer named Tony (Bercot) in a nightclub where he is holding court and would hardly notice a woman like Tony.  That is, until she flicks water in his face.  Tony mistakenly believes Georgio will remember the reference, as they had met once before when she was a waitress and he was flicking water in the faces of his female groupies. He doesn’t remember, but the awkward moment charms Georgio.

Georgio is attracted to Tony, perhaps because she is a new conquest and different from his usual girlfriends.  Against his upscale bachelor pad, sports car and charm offensive, Tony doesn’t stand a chance.  She is soon living with him, and, at his request, pregnant. Georgio hangs around with a much younger crowd of models and the like.  Curiously, Tony doesn’t seem to have a separate social life, work colleagues or friends, apart from her omnipotent married brother (Louis Garrel).

Tony never imagined she could land a Mr. Dreamboat, let alone have a child and home with him.  When, in an early scene, she talks about her past, Georgio tells her that she has to stop meeting jerks.  When she asks him if he is a jerk, he answers, ‘No. I’m the king of jerks.’  For Tony, he might be a jerk but he is ‘my king’ (‘mon roi’) of jerks.  Soon, it appears he is not even that.

Not long after they move into their new home, Georgio’s glamorous former girlfriend, a model named Agnes (Chrystèle Saint Louis Augustin) who has accused Tony of stealing her man, attempts suicide.  Georgio feels the need to check up on her daily, making an already insecure Tony deeply suspicious.   Then when Tony is several months pregnant, the bailiffs show up clearing out the furniture, including her family heirlooms.  Georgio assures her it’s a temporary cash flow problem and he does recover the furniture. But around this time, Georgio come up with the idea that a little pied-à-terre where he could be alone to chill out would be good for their relationship.

Eventually, Tony gets out of the rehab centre, where, through a series of largely silent montages, we are supposed to believe she is having a good time with a group of young men who don’t take her granted.   During her time in the rehab centre, we relive the events leading to the accident, as Tony is allegedly asking herself why she fell for Georgio and why she allowed herself to remain in a controlling relationship.

These, and other, questions are not answered, except, if one is honest, by the obvious superficial attributes of a man like Georgio and Tony’s need to be flattered by the attention of such a man.  The passion in the relationship is expressed in a kind of cinema verité style, similar to that of Polisse:  snot coming out of noses, tears and screaming – mostly from Tony.  A scene in which Tony lashes out at Georgio at a dinner party embarrasses their guests and the audience alike.

Men have traditionally cornered the market on films about a couple who can’t live w without one another, but cannot live with one another, and so we must welcome a female into the field.   Maïwenn, however, who co-wrote the script with Etienne Comar, does not yet have the skills of a Mike Nichols, who directed Who’s Afraid of Virginia Wolf; of an Alan Parker, who directed Shoot the Moon, or of an Ingmar Bergman, who directed Scenes from a Marriage, all brilliant films that also put the spotlight on a deteriorating relationship.  The relationship here feels like an unlived in construct and the characters of Tony and Georgio are so cold it’s hard to care about either of them. Unless you somehow acquire a stake in their relationship, all you are left with is a master class in overacting.