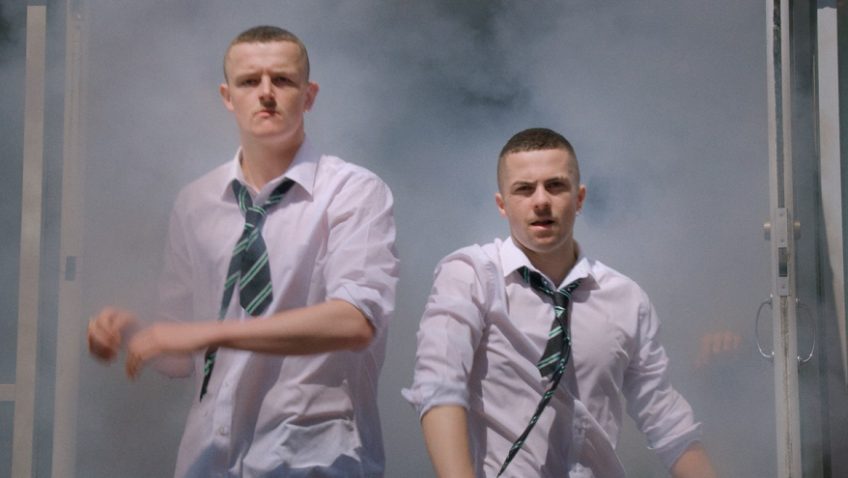 An entertaining coming-of-age comedy from a new Irish voice.

Like The Stone of Destiny, a 2008 Scottish adventure-comedy inspired by the theft of the Stone of Scone on Christmas Day, 1950, and the 2004 Merseyside adventure-comedy Millions, exploring the affect on a young boy finds a bag of cash that had been tossed from a passing train, Peter Foott’s feature film debut The Young Offenders, derives its thin but perfectly-formed plot from Ireland’s biggest cocaine seizure off the coast of western Cork in 2007.

The protagonists in this affable, lightweight coming-of-age adventure-comedy are fifteen-year-old school mates Conor MacSweeney (Alex Murphy) and Jock (Chris Walley). When the film opens they are sitting on a park bench looking out at the city of Cork and dreaming about what they would do with a windfall of cash. Their accents are so thick that some audiences might have trouble catching all the dialogue. No one, however, will have trouble following their escapades. And sure enough, with easy money on the brain, Jock sees a news item as a way of realising that dream and escaping his abusive father.

A drug-trafficking boat that has capsized off the coast of Three Castle Head and some of the bags of cocaine – valued at 7 million Euro a bag – have not been recovered. Off the pair go on their hundred mile road trip using two stolen bicycles as their transportation. Hot on their trail is Garda Sergeant Healy (Dominic MacHale), on a one-man crusade to free Cork of bike thieves, and, in particular, known bike thief, Jock.

While wily Jock manages to put Healy off the scent by redirecting the sat-nav device he planted on one of the bikes, the boys are, unwittingly, pursued on the return journey by a more malicious foe. A disabled drug dealer (PJ Gallagher), whom the boys find sleeping with his arms around a huge bag of cocaine, tracks down his victims from the name lovingly sewn into Conor’s shirt.

The shirt is one of many examples of how Foott uses the information at our disposal, including character traits, to further the plot. After they deprive the drug dealer of his bundle, true to his nature, Conor covers the shivering man with his shirt – a gesture that, like all the seemingly gratuitous details in the film, proves to be highly significant.

Key to this slim (it’s only 85 minutes) comedy is the chemistry between the two friends and their complementary personalities, admirably well portrayed by the two stars. Though Jock and Conor look around twenty, particularly the much taller, bigger Jock, they act their age. Conor you get the impression, Conor emulates Jock, much to his mother’s (Hilary Rose) despair. Their uniform of tracksuits with hoods, gold signet rings and close-cut hairstyles and thin moustaches is complemented by identical gestures. Though their social circumstances are also similar, the differences might account for the boys’ divergent personalities and conduct.

Both are only children and the product of one parent households with no money to spare, but the good-natured, generous Conor, who narrates his tale, has a strong moral conscience instilled by his hard-working, kind, but no-nonsense mother. Their house is in need of decoration, but comfortable enough and when Conor retires to his own room, his mother brings him a cup of tea, but – nearly always — respects his privacy. Indeed, the relationship between Conor and his mother is beautifully drawn.

Jock, who would have been – but for the touching ending – destined for a young offenders institute, lives alone in an unkempt cottage with his useless, alcoholic father (Michael Sands). Not only does his father fail to provide for Jock, but he feels entitled to usurp any money that Jock does manage to bring home.

Thanks to his mother, Conor has more direction in life, though not one Conor appreciates. He works in his mother’s fresh fish stall in the Cork English Market. Ironically, as we learn when a pretty, young customer approaches Conor, he hates fish. When the young woman asks what he eats, he explains that he loves all forms of chicken, a taste that he suddenly loses in one of several memorable encounters during the course of their journey.

The boys are elated when an old man with dementia hides them from Healy and then invites them to stay for a chicken dinner. After watching the old man wring the poor bird’s neck, sensitive Conor is put off chicken forever. Again, this seemingly superfluous incident returns with greater significance when the pretty young woman returns to the market at the end of the film.

A chicken catching scene also appears Foott’s calling card, his black comedy short film, The Carpenter and his Clumsy Wife. Even if the chicken motif disappears from his future work, it is unlikely Peter Foott will follow suit after this entertaining debut.