Home / LIFESTYLE / REVIEWS > / FILM REVIEWS / This sequel gets stuck in the past with nowhere to go but over the top. 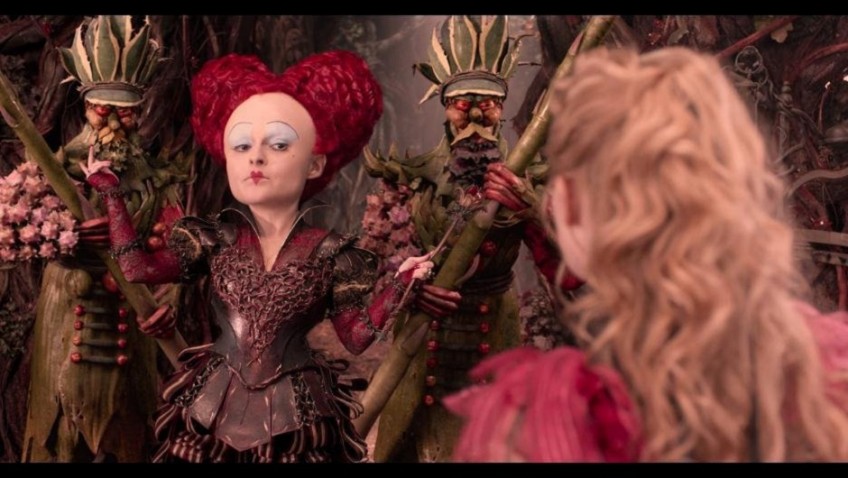 This sequel gets stuck in the past with nowhere to go but over the top. If you have a movie based on a children’s classic that grosses a billion dollars at the international box office, you make a sequel.

Fortunately, Lewis Carroll wrote a sequel to his famous book that could serve as a sequel to Tim Burton’s 2010 star-studded blockbuster, Alice in Wonderland.  Alice through the Looking Glass, written by ‘Wonderland’ writer, Linda Woolverton, but directed by James Bobin, (Tim Burton produces) has little to do with Carol’s book and tediously capitalizes on the trend for ‘origins’ prequels rather than sequels. Still, in addition to the impressive CGI and a stupefying abundance of set design, this is a rare female empowerment movie where the heroine does not have to be a sharp shoot or martial arts expert to show her superiority.

The first fifteen minutes or so – before Alice (Mia Wasikowska) goes too far through the looking glass – are a lot of fun, with a promising feminist revenge story that begins when the ship’s captain, Alice Kingsleigh, returns to the atmospheric Gloucester port after three years at sea.  In the impressive opening shot we witness how Alice’s quick thinking and courageous actions avoided a fatal shipwreck during a storm that left her male crew frozen in fear.

When she returns, however, it is not to a heroine’s welcome, but to a humiliating meeting with Hamish Ascot (Leo Bill), the pale, priggish aristocrat who had proposed to Alice with ulterior motives in ‘Wonderland.’  Ascot and his cronies, as well as his obnoxious new fiancé and mother (Geraldine James) tell Alice that a woman cannot be a ship’s captain.  Amish condescendingly offers her a position as a clerk, with onerous conditions. With her beloved father’s memory driving her on, Alice ignores the insults and asserts her rights to a 10% share in the ship.  To add insult to injury, however, Alice discovers that her mother (Lindsay Duncan) had signed over the shares in order to keep the family home.

Alice is not alone in her despair, however, as we’ve seen Absolem (Alan Rickman, in his last performance) flying about and it isn’t long before Alice does, too.  This is almost a mirror image to the ending of the first film, and, speaking of mirrors, Absolem leads Alice to one that she steps through.

The symbolic game of chess that is so important in the book is in play when Alice enters the Underland parlour through the mirror, accidentally knocking Humpty Dumpty (John Sessions) off the edge.  The game is not played for long, however, as the filmmakers are eager to reunite Alice with her strange mix of human and animal friends from Wonderland.

So The White Queen (Anne Hathaway), Tweedledee and Tweedledum (Matt Lucas), The Cheshire Cat (Stephen Fry), the White Rabbit (Michael Sheen), the Dormouse (Barbara Windsor) and the March Hare (Paul Whitehouse) are all back. Absent is Tarrant Hightopp (Johnny Depp), who is dying from his inability to convince anyone that his family, believed killed on the Attack of the Jabberwocky Day, are still alive. Sascha Baron Cohen as “Time” in Alice Through The Looking Glass

When Alice’s visit to Hightopp, AKA, the Mad Hatter, fails to reverse his deteriorating health, the White Queen decides that Alice must consult Time (Sacha Baron Cohen) and persuade him to change the course of events that led to the Hatter family’s demise.   In case you are wondering why no one from Underland could have been sent on the time travel mission, it is because they will be destroyed if they meet themselves. This Underland rule is also a staple of Sci-Fi time travel movies.

Time (Sasha Baron Cohen) might not be the most sympathetic of men, but despite the dangerous architecture of his kingdom, Alice is undaunted.  She is nothing if not resourceful and physically fit, not to mention courageous.  If Time will not cooperate, she will steal the coveted Chronosphere that will enable her to travel through time in the Underworld and rescue the Hatter’s family. Time warns Alice that no one can change him, and in a coming-of-age moment at the end of the film, she admits that he is right.  But time, and the admission of a guilty secret between sisters — the White Queen and her sister, the evil Red Queen (Helena Bonham Carter) — can change people and reunited families.

Bobin directed the delightful 2011 Muppets movie and its sequel, and worked with Sacha Baron Cohen on Ali G, Borat and Bruno.  Baron Cohen might have been pulling strings to get Bobin this gig, but none of the humour of Cohen’s best known films is present here.  It is disappointing, too, that Woolverton, who wrote the screen play for the successful Disney adaptations of The Beauty and the Beast and The Lion King, has delivered such a dull and incomprehensible story.  It is as if Woolverton is relying on a formulaic short hand  to summon up the emotion that is so sorely lacking.  With the Mad Hatter, Depp seems to have run out of steam when it comes to creating a character as memorable as Captain Jack Sparrow.

No expense was spared with the casting, costumes, make-up and hair, production design and spectacular CGI, but we got our fill of that in Alice in Wonderland, and there’s a déjà vu element to it here.  The main problem with Alice through the Looking Glass isn’t that no one cares about the Mad Hatter’s underdeveloped family or his clichéd relationship with his father (Rhys Ifans). It’s that Time, even portrayed by Baron Cohen, and Alice’s journey, are devoid of tension, humour or interest.  Instead of the basic story telling that made the opening scenes fun, we are handed fast cut scenes of self-indulgent excess; like a wealthy father who hands his kid a iPad instead of reading him a book at bedtime.