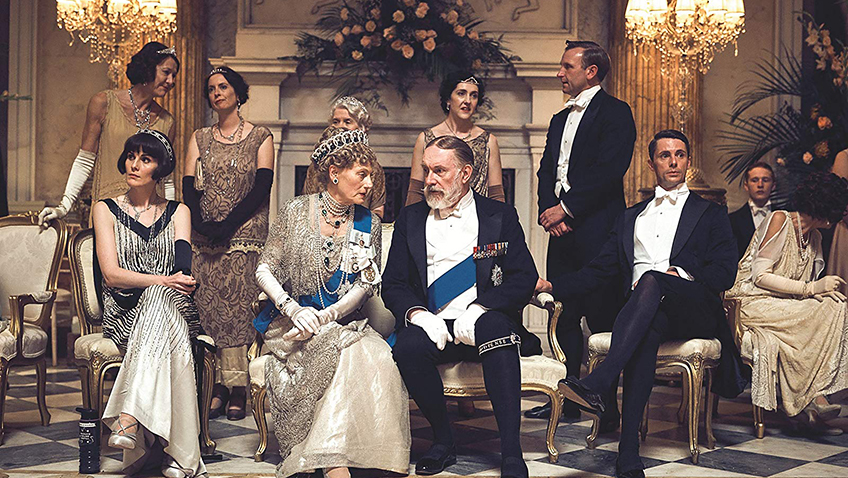 The cast of British acting royalty is so impressive in writer-producer Julian Fellowes’ movie version of his hit television series that you have to wonder who was left in the country to fill other roles during principal photography. If Samantha Bond and Lilly James are gone, they are replaced in generous fashion by none other than Imelda Staunton as the elusive Lady Bagshaw and Tuppence Middleton as her mysterious maid, Lucy Smith. Maggie Smith delivers her one-liners to machine-like perfection; Highclere Castle looks splendid as the Abbey; the production design is immaculate, and Anna Robbins’ gorgeous costumes are worth the price of admission. But Downton Abbey

is really another TV Christmas special that resumes two years after the events of the 2015 Christmas special finale. And like the 2015 special, it is directed by American television series director Michael Engler. Those who failed to follow the series from its inception in 2011 to this finale might be lost in the myriad of key characters and entangled relationships each of which becomes a little subplot.

If, in the place of episodes of a series, we have subplots of a movie, then what is the plot? The plot is as fluid as it can be to accommodate all the characters that the public will want to see again. The announced arrival of King George V (Simon Jones) and Queen Mary (Geraldine James) at Downton Abbey for a short stay in 1927 results in turmoil, changes in staff, a variety of resentments, class interaction, shocking revelations and as many socio-political issues (including illegal homosexuality and Irish Nationalism) as are possible to squeeze into two hours.

In a quaint opening sequence, we follow the letter from Buckingham Palace through the mail sorting system, onto a steam train (electric trains were not common for another decade) and into the hands of a man who delivers it to the great house. The butler, Mr. Thomas Barrow (Robert James-Collier) delivers it to The Earl of Grantham (Robert Crawley, Hugh Bonneville) and soon everyone knows.

Crawley’s daughter, Lady Mary Talbot (Michelle Dockery) is of the view that Barrow is not up for the occasion and, perhaps in panic, uses her influence with the recently retired Mr. Carson (Jim Carter) to persuade him to return temporarily. While this seems to be a gratuitously contrived situation, it recognises that no Downton reunion would be complete without Carson and provides the fair-minded Robert Crawley the opportunity to reward a servant for integrity in speaking his mind. Later, integrity, or rather the passion of conviction, is also rewarded when assistant cook Daisy’s (Sophie McShera) fiancé, footman Andy (Michael Fox), risks his job by wrecking the boiler in a jealous rage over Daisy’s flirtation with the boiler repair man. 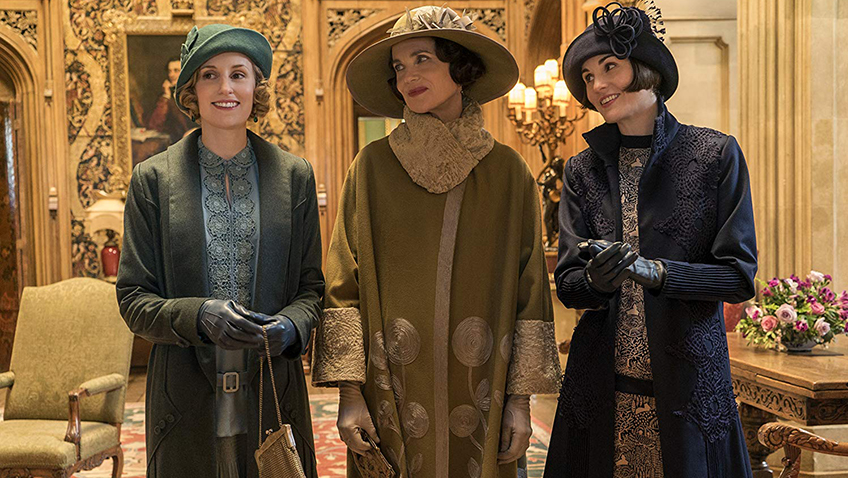 Crawley’s refusal to sack Barrow is understandable, and his appreciation of Barrow’s integrity places Barrow in the golden light he will need later when, freed from the bondage of Downton Abbey for a few days, he gets arrested for finding true love in a pop-up gay club. Here, one of the many socio-political issues of the film is given an airing, but oddly, battered women syndrome is not one of them.

Daisy believes that Andy’s act (he puts the boiler out of commission jeopardising the royal visit) is a sign of love and the energy he will need to join her in elevating their status in society, not an indication that he has serious anger management issues.

Later in the film we witness Princess Mary’s (Kate Phillips) humiliation in front of the Grantham ladies when her authoritative husband, Viscount Lascelles (Andrew Havill), treats her like a slave, not a wife. Believing her husband has refused to accompany her to the ball, Princess Mary is crying on a garden bench when Tom Branson (Allen Leech), the handsome chauffeur who eloped with the now deceased Lady Sybil in earlier episodes, approaches. Although he has a knack for appealing to ladies above his station in life (to reveal how this manifests itself in this film would be a spoiler), he fails to recognise royalty here and gives her advice about ‘doing what is right.’

In this world, doing what is right means sticking to your abusive older husband even if you and your children will suffer because institutions, including the institution of royalty and marriage, trump personal sacrifices. 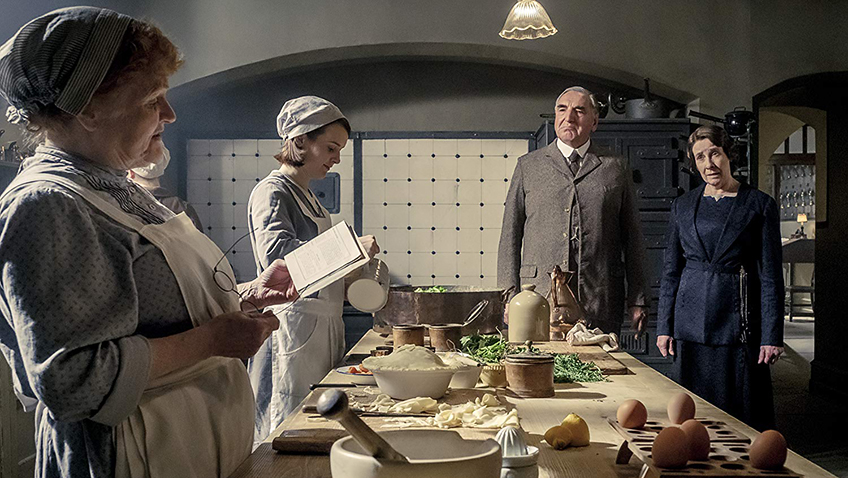 This loyalty to institutions and pride in their service, might be behind the Downton Abbey staff’s decision to undermine the excessively snobby and obnoxious royal entourage that, in several comically-played scenes, has taken over their positions and moved into the house to serve royalty – with no regard for the Downton staff’s feelings.

Head housekeeper Mrs. Hughes (Phyllis Logan) and head cook Mrs. Patmore (Lesley Nicol) are particularly indignant, and Patmore is delighted when her replacement, French chef Monsieur Courbet (bi-lingual actor Philippe Spall looking a lot like the great painter), is given a sleeping draught so that English food, procured from proud local vendors and cooked by the Abbey’s British staff, could be used. 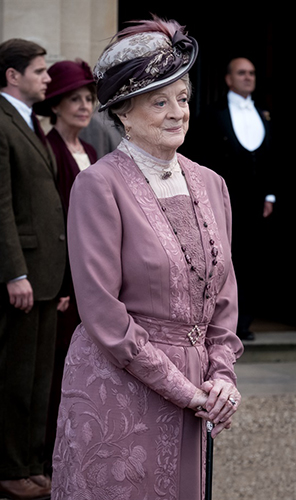 You might think that the staff, who are on call 24 hours, six days a week, would welcome this paid leave, but that would be to overlook their pride in a house that is not their own and their loyalty to its owners who, as Barrow realises, owe them nothing more than a week’s wages. But there is something uncomfortable about the childish conspiracy hatched in the downstairs quarters. It is reminiscent of The Parent Trap, when twins, played by Hayley Mills, conspire to reunite their long-separated parents. And when the King compliments Mr. Courbet on the food, Moseley (Kevin Doyle) cannot contain himself. Breaking the code of silence the staff agreed upon, he steps before the dinner party to correct the false attribution like a little child being presented to the dinner guests before being taken up to bed.

The benevolent Queen smiles indulgently at the little man, saving him from the sack by diplomatically pointing out that all manner of people behave strangely in the presence of royalty.

Fortunately, Maggie Smith is on hand, almost always with her new enemy-turned- adviser/friend Lady Isobel Grey (Penelope Wilton) to fire off the mostly brilliant one liners and to have a touching heart-to-heart with her favourite granddaughter, Mary, who is torn about carrying on the traditions of Downton in the modern era. But it is Imelda Staunton as Lady Bagshaw who steals the show. Her account of her illicit affair with Jack is as poignant as Gretta’s story of her young lover Michael Furey in James Joyce’s ‘The Dead.’