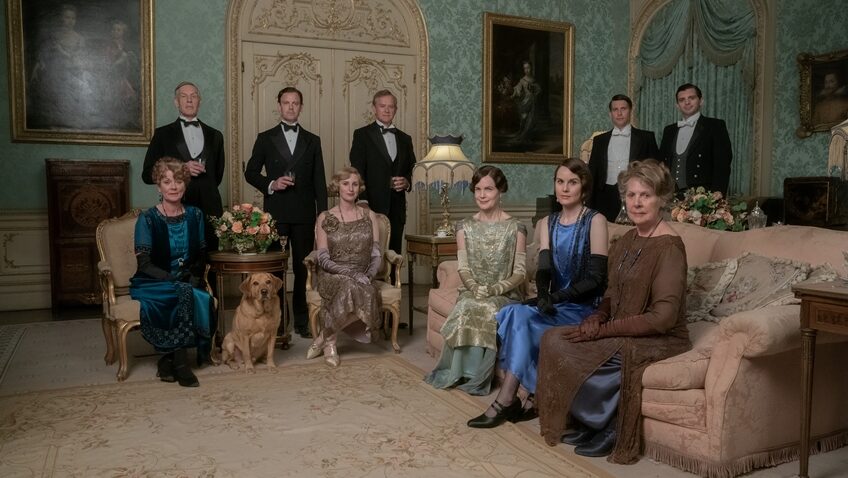 Buried under the weight of subplots are sumptuous costumes, locations – and Maggie Smith.

Brush up on the extended Crawley family tree and the household of servants and then sit back to see how Julian Fellowes manages to give every one of them a story within a story, complete with a neat, happy, and usually sentimental, ending. Fellowes has teamed up with the Countess of Grantham’s (Elizabeth McGovern) real-life husband, director Simon Curtis (Goodbye Christopher Robin, My Week with Marilyn) to squeeze an entire television series into a sumptuous, beautifully costumed and designed two- hour feature film.

To do this, Fellowes makes Downton Abbey: A New Era what will surely be the most heavily and insipidly plotted and sub-plotted film of the year. Fellowes needs an architectural frame as solid as the Abbey itself in which to house all the sub-plots and their corresponding emotions and cathartic climaxes.

To accomplish his grand design, we have two parallel overarching strands. The first is that the Crawleys reluctantly allow a film crew, headed by the charming, handsome director Jack Barber (Hugh Darcy), to take over Downton because the generous location fee would buy them a new roof for the leaking attic bedrooms.

This dreaded inconvenience coincides with a letter received from the estate of the late Marquis de Montmirail, who has died leaving a splendid, luxurious villa on the Côte D’Azur to Violet Crawley, the Dowager Countess of Grantham (Maggie Smith, still delivering the sharp one-liners and the best part of the film).

The Dowager Countess is leaving the villa to Sybbie, her great-granddaughter from the brief (and at the time, scandalous) marriage of chauffeur Tom Branson (Allen Leech) and the rebellious Lady Sybil Crawley. For the sake of Sybbie, Branson was forgiven, and Lady Maud Bagshaw’s (Imelda Staunton, wasted) illegitimate daughter Lucy (Tuppence Middleton) marries widower Branson, thereby becoming part of the Crawley family, one step removed.

Both of these incidents create panic in the family, but it is obviously the mystery of what transpired between heiress Violet and the young Marquis in 1864 that is preoccupying the normally unflappable Robert Crawley, 7th Early of Grantham (Hugh Bonneville). He calculates that he was born around nine months later in 1865.

Naturally, Robert and his wife Cora (McGovern) rush down to the Riviera with an entourage that includes Mr Bates (Brendan Coyle), mainly to prevent him policing the film guests who prove to be an unruly bunch. The Riviera entourage also includes Lady Edith, (Laura Carmichael) the dullest of the Crawley children, who is married to the dullest of the dull Crawley husbands but, unlike Mary’s absentee second husband, Lady Edith’s is the perfect match.

The warm welcome from the new Marquis de Motmirail (Jonathan Zaccaï) is chilled over by the open hostility of his mother played by the great French screen actress Nathalie Baye in a rare appearance. This will help ensure European interest, prospects, as will the dramatic Mediterranean scenery that beacons like Bali Ha’i.

The intrigue that centres around a cache of letters and an early photograph of young Violet with a loving inscription from the late Marquis, has Robert agonising about whether he, who has hosted the King of England, is really the illegitimate son of a Frenchman. There is very little suspense and no one but Robert and the Motmirail really care, but nonetheless the matter is not resolved until the house gathers around the Dowager’s deathbed (this is hardly a spoiler, folks, when Maggie Smith is 87). Meanwhile, his wife, Cora, has a big secret, too, but that turns out to be a bit of a red herring also, at least until the next instalment.

It is the film crew strand that manages to give most of the servants their time in the spotlight and the chance to better their lives. The Jazz Singer of 1927 and the craze for talkies have changed everything, including, in mid-production, the financing for Baxter’s film. Mary, keen to help Baxter and her new roof, comes up with the idea of turning the film into a talkie.

For those hoping for something original, this is Julian Fellowes’s chance to bring Singin’ in the Rain to the British aristocracy, but without the dancing. The servants step in as extras, and former house servant and school master Joseph Moseley (Kevin Doyle) discovers his hidden talents as a script writer.

But it is Lady Mary who finds her voice, quite literally, when director Baxter, who falls in love with his host, convinces her to provide the voice for the beautiful but temperamental Myrna Dalgleish (Laura Haddock), whose shrill cockney accent is a problem. This being Downton Abbey, however, where the staff are as helpful and kind as the aristocrats, Anna Bates (Joanne Froggatt) and Daisy Parker (Sophie McShera) give uppity Myrna a serious talking to before Countess Grantham returns to bolster her confidence by helping Myrna master the American accent.

And just in case you miss the gay theme, sensitively introduced in the 2019 feature film, Tom Barrow (Robert James-Collier) attracts the attention of matinee idol Guy Dexter (Dominic West) whose name is not the only thing about him that is a secret.

Drowning under its subplots, none of the drama can breathe and become real. Fellowes and Curtis fill the final third of the film with a long series of unearned pay-offs as every character’s little problem is happily resolved. Until then, there is just enough sumptuous set design, locations and period costumes to keep us watching.