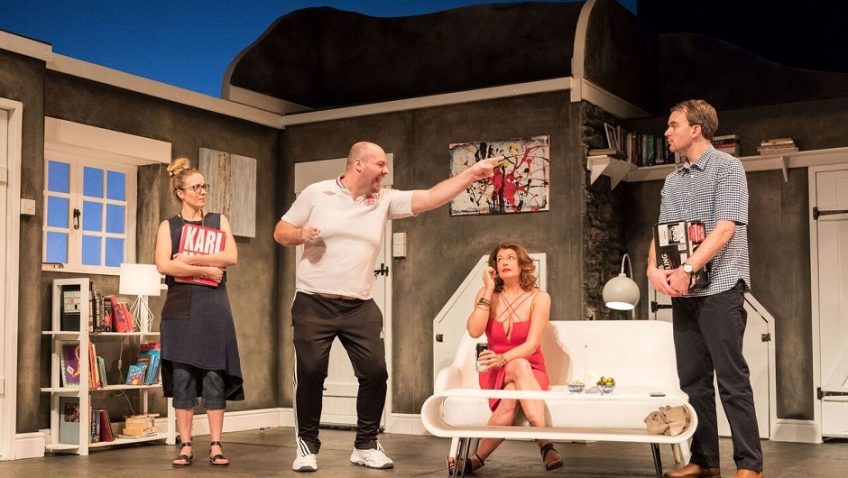 In the world of ‘real people’

‘Entertaining tragedy’ is what playwright Torben Betts likes to create, interspersed with farcical comedy. Invincible certainly gives us all that. A resounding success down south in 2014, this, his fifteenth play (written two years before Get Carter) has since, most appropriately, moved up north. It tells the tale of Emily and Oliver, an unmarried couple of wordy, well spoken, well educated southerners, forced financially to leave their elitist London bubble life when Oliver’s made redundant from the civil service. Now sandal-wearing, opinionated Emily, fully in love with the idea of being a shrill anti-capitalist, anti-materialist, left-wing zealot, gets her chance to head north to bring up their daughters in the world of ‘real people’ and community. So enter the real people, new neighbours invited round for the evening – big, boorish, talkative postman and football fanatic Alan, in England T-shirt, tracky bottoms and trainers, and his sexy receptionist wife, Dawn, scantily clad in red, wearing earrings the size of hoola-hoops and jacked up on precarious stiletto spikes. Now cue truckloads of stereotypical farce and clash in traditional sit-com mould with Benny Hill moments and belly-laughs all round (in all senses); cue awkward silences and misunderstandings in a clash of olives versus beer cans, Marx versus Marx brothers and revered arty abstracts painted by Emily (Pollock joke? Yes, please!) versus Alan’s inept portraits of his beloved cat, Vince (named after HMS Invincible, yet sadly, like the vulnerable humans, far from invincible himself.) Yet it’s still words and communication that are at the fore in this play.

As well as being compared to Alan Ayckbourn’s work (and Betts worked as resident dramatist with Ayckbourn in Scarborough) Invincible is often likened to Mike Leigh’s Abigail’s Party (whether Betts likes it or not) because amidst all the farce and laughter and stereotyped characters, deeper insights into individual characters and their relationships gradually emerge, while the mood turns unexpectedly much deeper and darker to culminate in a gut-busting, thought-provoking punch.

Through Act II especially, the focus shifts from comical interactions of north versus south, of working-class versus middle-class, as poignant insights into each of them serve to demonstrate that no-one, in reality, is ever just a stereotype and there’s no such thing as an ‘ordinary person‘. Through small-talk and lengthy discussion, involving both laughter and tears – on politics, war, sport, the merits of truth over politeness, on disclosures of personal heartache – details of their lives are revealed, each emerging as a unique, more rounded individual, each deserving, perhaps, more understanding and sympathy than previously realised.

It’s a tad puzzling why Oliver and Emily’s rented house up north has non-stereotypical, rather classy Cotswold-style cottage windows and doors, and it’s amazing what colossal changes the two of them go through once money looms large, but as we move through laughter and farce to tears of tragic loss and deep despair, strong performances from Alastair Whatley (Oliver), Emily Bowker (Emily), Elizabeth Boag (Dawn) and Graeme Brooks (big Alan) ensure a riveting, intriguing entertainment that packs a real punch.