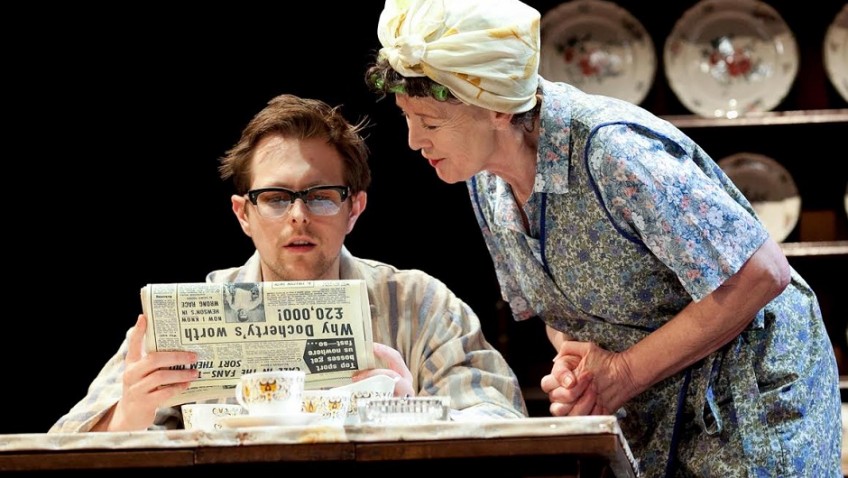 We will never know whodunnit at this Birthday Party

Harold Pinter wrote The Birthday Party in 1957. After the terrible slating it got, he almost gave up writing altogether. Instead, he went on to win the Nobel Prize for Literature in 2005, and The Birthday Party is now one of the most performed of his twenty-nine plays. To those who can’t stand the Theatre of the Absurd or those who prefer their mysteries to be neatly tied up with a grand Hercule Poirot style flourish, the play might prove frustrating – or even ‘insane and pointless’ as they called it back then. Indeed, by the end, any mysteries, ambiguities, chaos and confusions, rather than being resolved, have multiplied. Yet, it’s precisely because the past lives and relationships of the puzzling characters are never explained that the play is riveting entertainment, its gripping atmosphere created through an uneasy blend of light comedy, banal everyday life and small talk, and dark, menacing terror and cruelty. The interactions of the six characters take place in the living-room of a seaside boarding house, referred to as shabby (though the set looks pretty neat for the 1950’s), set on a raised stage. Below, invisible in the darkness but briefly glimpsed in bright, chilling flashes, lies what’s hidden beneath – skeletons, not so much in cupboards as under floorboards. Likewise onstage, what should we read into our brief glimpses of the characters and their relationships? Can we even begin to understand who they really are or guess what might lurk beneath?

Cheryl Kennedy, in turban, rollers, wrap-round pinny and fluffy-edged slippers is a rather simple-minded, forgetful, diffident, gullible Meg, a somewhat incompetent, lethargic and lonely landlady and wife, while Ged McKenna, as husband Petey, is a calm, quiet, uncomplicated, uninvolved, amiable old deckchair attendant. Their year-long boarder, Stanley, unkempt, unshaven, permanently in vest, striped pyjama top and dark-rimmed specs (later broken, rendering him helpless, like Piggy in Lord of the Flies) is a disturbed young man, a depressed drop-out and ex-pianist, quick to anger, ready to crack. Once the puzzling plot with its already enigmatic relationships well and truly thickens on the arrival of two sinister strangers, Stanley (brilliantly thanks to Gareth Bennett-Ryan) declines into a gibbering, broken wreck, eventually losing all power to communicate, and without that power, there’s nothing left.

As the commanding, voluble Goldberg (whose first name refuses to stay the same) Jonathan Ashley musters charm and menace in turn as he maintains masterly delivery of both fast-fire repartee and of the long-winded spiel in which he says so much, so impressively, whilst telling us so little. With deadpan delivery and minimal gestures, there’s a fine performance too from Declan Rodgers as his young, slim, muscular Northern Irish sidekick, McCann. Chilling it is that one instant, a charming, smiling Goldberg talks of respect, affection, love and warmth, when the next he’s bullying, intimidating, controlling, manipulating, torturing the weakened Stanley without mercy. Not only do we never know why, the others in the house don’t even know it’s happening. Young, malleable Lulu (Imogen Wilde) also at the disturbing birthday party ( – and is it even Stanley’s birthday?) is another who’s abused. When the lights go out, all hell lets loose, creepy shadows of torchlight adding further menace.

Self-delusion, mental fragility, lies, deceptions, miscommunications, misinterpretations and misunderstandings abound in this strange, little onstage world where words conceal as much truth as they reveal. In our own age of creative self-presentation, manipulated image, spin, cover ups, mass superficial communications and selective, distorted ‘truths’ and data, it’s not altogether irrelevant, then.

A few longer, menacing, uneasy, icy silences would be a welcome addition, perhaps, but tension and suspense are admirably sustained in this thriller, in which not only will we never know whodunnit, we won’t even be sure what’s been done.

After Margate, the play will finish with 6 nights at the Belgrade Theatre in Coventry from 13th-18th June.