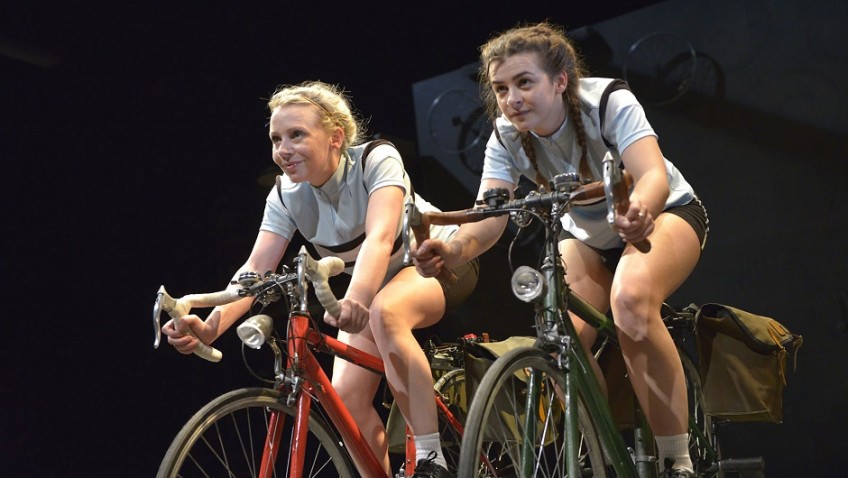 Snappy script, warm humour, super cast and brilliantly innovative use of props make Beryl a sheer delight from start to finish. Starting as a radio play in 2012,Beryl – a Love story on Two Wheels was adapted for stage in 2014 to coincide with the Tour de France’s Grand Depart from Leeds, the piece prompted by the huge injustice in the lack of recognition for the colossal achievements of one massively dedicated, inspiring woman – Beryl Burton.

Why is it Beryl’s name doesn’t spring to mind in a flash as the legend and inspiration she is? Everyone remembers Roger Bannister, yet all look blank when asked, who was the greatest British female cyclist of all time, dominating women’s cycle-racing across three decades? Who was five times World Champion, winner of vast hauls of national champion’s trophies and medals? Who set numerous records, holding even a men’s title for two years in the 1960s? Whose 1967 women’s record for number of miles cycled in 12 hours hasn’t been beaten to this day? And who did all this, and more, in spite of chronic, potentially (and ultimately) fatal health problems?

Beryl Burton’s life and career spring to life onstage with warmth, feeling and bellyfuls of visual and verbal humour. Nicely evoking the fifties, a grey, dimly lit bike repair shop with wheels, bike frames and cluttered shelves, fills the stage, while black and white stills and motion film countryside whisk us to other locations. The story, though linear, is clear, snappy and cleverly thorough, while variety and versatility of both script and actors ensure constant momentum, impact and fun.

Four hard-working actors, in gear and perfectly synchronised, have a peddle-pushing whale of a time, managing to appear laid back throughout whilst maintaining a highly polished flow of well-oiled efficiency and joie de vivre. Zipping through slick, rapid role changes, never frenetic, they people the stage with nurses, doctors, teachers, cycling buddies, schoolboys in caps and a (somewhat whiskery) mother-in-law (Dominic Gateley).

At 17, it’s love at first sight for Beryl, and love at first bike too, as soon as Charlie pushes her to join the cheery fraternity of Morley Cycling Club in Leeds and enjoy the freedom and thrill of cycling. On (and off) her bike on blocks, Samantha Power packs a powerful punch as Beryl – single-minded, pig-headed, fiercely competitive (in spite of a heart weakened by rheumatic fever) and full of down-to-earth Yorkshire grit. Yet mother, wife, knitter, OBE, MBE, opera-loving Beryl is flawed and vulnerable too, her daughter Denise (Rebecca Ryan) obliged to take a back (or side) seat until old enough to become a rival and winner in her own right.

As husband Charlie (and kids in caps) John Elkington is admirable. Loving friend, devoted soigneur, Charlie backs his (sometimes ungrateful) wife right through till her sudden death on the eve of her 59th birthday. With no financial or moral backing back then, training and funding were up to them alone. Always strapped for cash, Beryl put in long hours of back-breaking, rhubarb-forcing toil before cycling huge, fare-free distances to compete in races across the UK and Europe, her energy derived from rice pudding, served in baby bottles, and coffee with honey.

With this funny, delightful, inventive, poignant play, Maxine Peake, like remarkable, relentlessly driven Beryl, makes her mark in championing the cause of women. A formidable actress she’s travelled from Victoria Wood’s Dinner Lady Twinkle via Shameless, Silks, The Village etc etc to The Theory of Everything and Hamlet, writing, directing, acting and proclaiming her views along the way. A film next, perhaps?