Home / HEALTH / Walking back to happiness 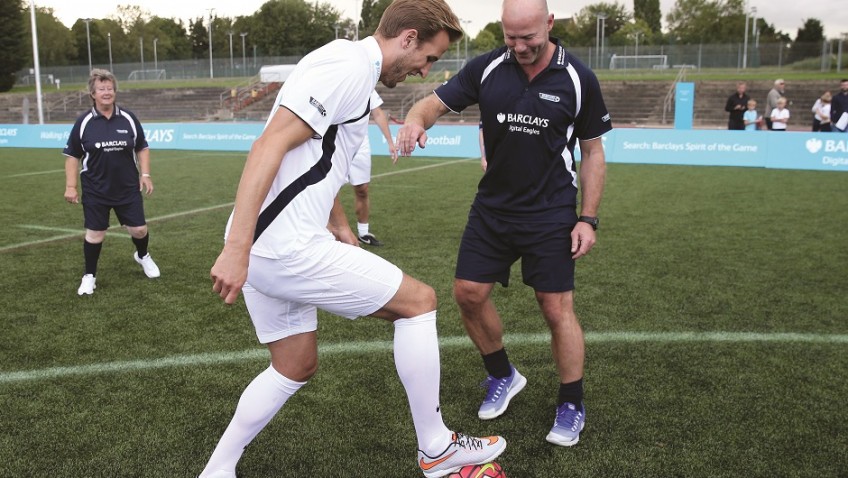 Walking back to happiness

Now we all know that walking is a sure fire way of keeping up a fitness level and done regularly can greatly help better physical well-being.

So what more appropriate way to get men over fifty years of age back into a regular form of exercise than to incorporate the national game of football into such a beneficial healthier lifestyle. But not football in the traditional sense.

That would be too big an ask of senior citizens. No – shorten the sides and keep the pace appropriate for the age. No running, but walking. That would sustain a healthy interest. No turning and twisting, no out of breath running up and down the park, no risk to injury. Perfect.

The BBC caught wind of this and sent roaming reporter Mike Bushell out to break the story.

The news item featured on national television and grabbed the attention of a whole world of former footballers and habit formed couch potatoes. The game spring- boarded widespread interest and gradually venues sprung up and clubs were formed.

A walk in the park Two years later Barclays Digital Eagles ran a campaign to get the senior citizens more computer confident and featured walking football at the spear-point of the campaign.

The advert sparked an unprecedented interest in this new variant of the beautiful game. It seemed everyone wanted to find out where they could get back into the game.

Fortunately, there was a tool on the internet already out there in place. People could access the website www.walkingfootballunited.co.uk and find out where their nearest club could be found.

The website also featured rules, articles of interest and uploaded action videos and photographs. Within six months there were 125 clubs registered on the site, and a year later in November, 2015, that figure rose to 400. To date there are now 672 clubs nationwide.

What was all the fuss about? What was the appeal? On the face of it, it seemed that so many thousands of ex-footballers were able to rekindle their passion for a game long thought lost.

Driven out by the physical demands on an ageing body, the speed of far younger players, the time constraints and the unwanted risk to injuries that would take far longer to recover from, it was a no brainer that the game had to be given up and more leisurely pursuits and perhaps gentler pastimes taken up.

Walking Football allowed for one more last hurrah into former glory days and the love for the sport. It was no wonder that so many hundreds poured back into the game. It wasn’t just the game itself though.

It was being back into groups of like-minded people. Sharing the camaraderie, the wit and banter that go hand in hand with the game. It was fun, it was joy, it was playing for oneself, playing for the team.

New friendships and associations, opportunities to socialise in after game refreshments and invites to other functions presented as huge benefits to the mental well-being of senior men from 50 through to the 80’s. What other sport provided such?

The pace of the game and the age target reduced the risks of injury. People having quit the game through previous knee, hip, foot injuries etc. could return to football. It was also beneficial exercise for those having weight issues or slight mobility concerns.

The regular cardio vascular work out at a more suitable rate aided many people in their bid to attain a healthier lifestyle. Muscle strength was proven to be achieved, as was better motor coordination and mobility, core strength and improved physical well-being.

The competitive game also came to the fore, and now the nation can boast of three national tournaments, as well as scores of festivals and local tournaments that keep the walking footballer’s diary entertained.

Teams have been invited to venture abroad to places like France, the Netherlands, Italy, Portugal and Spain to play.

This year in November, the national champions of Scotland, Wales and England will meet in the first of an annual event. Perhaps a European Championship is soon inevitable.

The women’s game is also gradually thriving, with a dozen or so ‘ladies’ sessions already set up. How long before we see the fairer gender having their own tournament? Well … as early as next summer. Plans are already in motion.

So in essence, the beautiful game at a walking pace, has both physical and mental well-being as key factors for the senior participant. They can either play for fun and gentle exercise, or join in differing levels of competitive play, socialise and form new relationships.

Other sports have cottoned on to the success and benefits of this new sport, and now rugby, basketball and netball are gaining momentum.

Not just former passions, but a healthier lifestyle, a more beneficial and enriching style for life. Happiness is back by walking, and long may it continue to be so.