Home / HEALTH / Basketball for all. 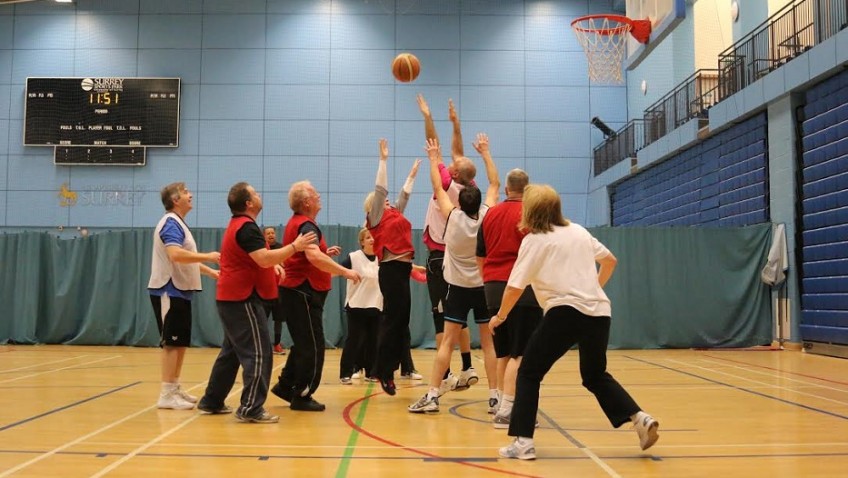 Walking Basketball (WB) provides a combination of aerobic exercise, learning and practicing new skills and competition in a safe and friendly environment. The same as traditional Basketball but at walking pace it is aimed at increasing physical activity levels, weight loss, social cohesion and participation in sport. This new sport was initially targeted at over 50’s but is now being expanded to other areas of society.  It is suitable for all ages, all sizes and all abilities.

Sessions started at Guildford Spectrum Leisure Centre in November 2013 with a small grant from Basketball England who were very keen to see this up and running.  As it says, it is a walking version of the running game, but it is a great low impact, cardio exercise.  The average stats of players is 3,500 – 5,000 steps taken and 500 calories burned in a one hour session.

WB had a visit from BBC Breakfast in January 2014.  Following this report we have had huge interest from all over the country and from abroad

Over 50’s players love the sense of camaraderie that individual sports just don’t have. There is a lot of friendly banter and healthy competition but at the end of the session everyone goes off for a coffee together and a lot of new friendships have been forged.  The feedback from the players is that they like to be part of a team and they generally find it more fun than being in a gym and exercising in isolation.  The social and well-being effects have been a bonus and it is felt that it is no longer just a sport it is a social activity with some sport thrown in.

Walking Basketball is an umbrella organisation/governing body run to ensure there is a high level of coaching.  They like to have coaches available to set up sessions and adhere to the high standards expected for the Walking Basketball players.  WB make sure that qualified coaches run the sessions to avoid injury and to encourage people to come back.

Walking Basketball are already working with local GP referral schemes to offer their participants something different to play and it is proving to be very popular.   WB also works with MIND, the mental health charity and AGE UK.   They are also in negotiations with Basketball England and the British Basketball League with a view to rolling the sport out all over the UK.

The social benefits of Walking Basketball are huge as the mainstream basketball clubs who are already running it have found out.  Many of the over 50’s who have joined sessions are time rich and have gone on to become volunteers for the clubs, using the vast array of skills gained in their working lives.  They attend the running basketball games and watch training sessions, going on to become important members of the support network.   Many Over 50 players have never played basketball before and it has opened their eyes to the family community that revolves around the game, gaining so much from this.

Walking Basketball was also lucky enough to be a part of the rehab of a GB Basketball player who joined in his local sessions.  Andrew Lawrence (25) is now back to full fitness and has travelled to join Spanish team El Gipuzkoa in ACB.  This is what he said..

“I was coming off an ACL surgery and was frequently in the gym lifting weights, walking and cycling.  I was looking for something a little more intense and I heard about walking basketball sessions.

Walking basketball really helped me as it was much more of a workout than I had initially imagined but also competitive.  I was able to play basketball again much earlier than I would have been able to do without it.  Obviously I had been missing basketball tremendously and walking basketball was able to fill the void I had until I could play at full speed again.  I found myself looking forward to the session every week and even now that I have been cleared I am a regular at the sessions.

I would advise everyone and anyone to join a local walking basketball session, as you will have a lot of fun and work hard.