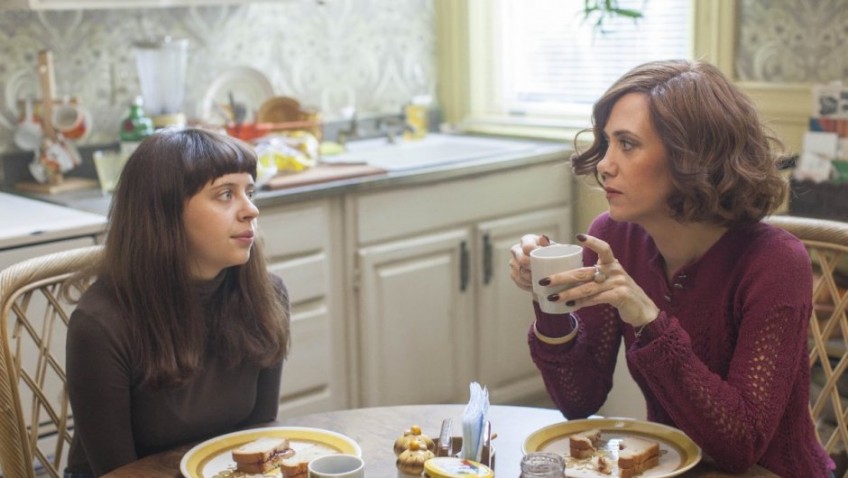 Two teen-age coming-of-age-films are released this week that are directed by women, include personnel diaries, and are out to break a few taboos. Both The Diary of a Teenage Girl and 52 Tuesdays are centred on the difficult relationship between a mother and daughter as the daughter awakens to her own sexuality – and that of her mother.

The Diary of a Teenage Girl, based on the graphic novel by Phoebe Gloeckner, is a well-acted, perceptive, humourous account of a 15-year-old girl’s (Bel Powley, the ‘loose’ Princess Margaret in A Royal Night Out) affair with her mother’s boyfriend (Alexander Skarsgard).

Minnie (Powley) might be a loner from a moderately dysfunctional family, but she a typical teenage girl in one respect at least. She is longing for love and an identity. When the film opens (the first words uttered being, ‘I had sex today’), Minnie is elated at having lost her virginity to ‘the handsomest man in the world.’ The man is none other than her libertine mother Charlotte’s (an excellent Kristen Wiig) attractive 35-year-old boyfriend Monroe (Skarsgard). Charlotte divorced her scientist father (Christopher Meloni) because he didn’t believe in women smoking and drinking, and Charlotte does both.

Confident in her sexuality, Minnie has sex with a cute boy her age from school, but her experience in sexual matters is obvious and frightens him: she ensures her own satisfaction as it’s clear the boy is no match for Monroe. Minnie, who writes and draws the progress of her sexual awakening in her diary, is not very discreet about the affair and eventually her mother discovers the truth. We come to suspect that Minnie wanted to be found out both to teach her mother and the good-for-nothing Monroe at lesson. The odd thing is, and what makes the film somewhat disingenuous for all its sincerity, is that there do not appear to be any lasting repercussions of these events.

Writer/Director Marielle Heller’s determination to be refreshingly candid and honest produces some gratuitously graphic sex that might be the real reason the film is getting so much attention. Powley, who is 23, but playing an under-aged teenager, has lashed out at the film’s UK 18 Certificate. She is furious that a lot of the target audience cannot legally see the film, even with an adult. But would a 15-year-old want to accompany her mother to The Diary of a Teenage Girl, and would a mother want to see it with her daughter? The Australian coming-of-age film 52 Tuesdays, tackles a complex and unusual subject in a sensitive manner when a mother’s (Del Herbert-Jane) announcement that she is beginning a transgender process prompts her devoted teenage daughter, Billie (Tilda Cobham-Hervey), to rebel and experiment with her own sexuality. At times intentionally didactic about the serious side of transgender issues, the drama is infused with a documentary style that lends authenticity to the largely fictional story. But director Sophie Hyde and writer Matthew Cormack pack so much sexuality and gender variance into the film that it risks diluting, if not undermining the central story.

When she was one, Billie’s mother Jane (Herbert-Jane) and father Tom (Beau Travis Williams) divorced after Jane came out of the closest as a lesbian. Since then Billie has been very close to her mother. They share Jane’s house with Jane’s effeminate uncle Harry (Mario Spate) who now has a young daughter (Audrey Mason-Hyde) who looks more like a little boy. Then one day, when Billie is 16, Jane reveals plans to under hormone treatment to become James, the man she has always wanted to be.

Like the teenager in The Diary of a Teenage Girl, this news prompts Billie to begin a diary, but a video diary. Whereas her love for her mother Jane was unconditional, Billie is now more ambivalent. This ambivalence is compounded with distance when James, as Jane prefers to be called, asks Billie to live with Tom for a year while she undergoes the process and deals with the psychological impact of the change.

They agree to meet every Tuesday between 4PM and 10PM for quality time together. For Billie, this time is precious, but, feeling her mother is pushing her away, Billie starts acting cruelly and insensitively. At this point Hyde goes off into documentary mode providing some background on transgender change. We also learn that Jane has suffered a major set-back when the doctor tells her that her body is rejecting the testosterone injections. Her only solution is to undergo a painful, risky and expensive series of operation.

Frustrated at the additional length of time before Jane’s transition to James is complete, Billie starts to explore her own sexuality, latching on to an attractive, slightly older couple Josh (Sam Althuizen) and Jasmine (Imogen Archer). She convinces them to hang out with her and even participate in her video taping of their sexual acts.

Billie’s reaction might be understandable, but the film devotes so much time to the sexual triangle with Josh and Jasmine that you start to wonder why the couple put up with it and why a beautiful girl like Billie cannot find a boy her age. It could be the same reason why Minnie, in ‘The Diary of a Teenage Girl’, prefers an affair with her mother’s lover: rebellion. And just like Minnie, it seems that Billie wants to be found out, too. When Billie sends a nude photo of herself to Jasmine, Josh and Jasmine draw the line. A family/school meeting takes place in which James warns Billie that her actions amount to child pornography that could get Billie into real trouble with the law.

As in The Diary of a Teenage Girl, there is a happy ending that seems to rush in, glossing over any lasting repercussions or future problems.

52 Tuesdays is a thoughtful, restrained and unusual look at how different sexual preferences and genders can co-exist in families, but there are some irritating points. Halfway through the film we learn that Jane waited until Billie was older before going forward with the gender change, but we never learn what Jane has been doing for sex in the interim. James keeps a female lover secret from Billie when Billie moves in with Tom. And it does seem that Hyde goes overboard with the gender game.  Does Jane’s brother have to be effeminate and must he dress his daughter like a boy? And does Billie’s sexual rebellion (with both a boy and girl) have to be so graphically examined for us to get the point?