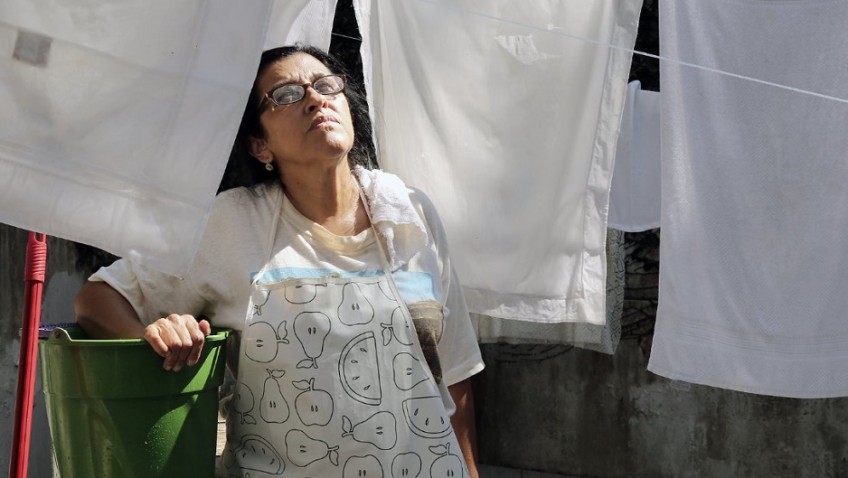 The Second Mother (Que Horas Ela Volta?) is not only the best feel good movie of the year but it achieves that status without a single clichéd, quirky, sentimental or predictable scene or character.   Ninety-percent of the film takes place within a bourgeois family’s modernist house and the plot is simple, but the characters and themes have a depth and complexity that is rare in drama let alone comedy.  What’s more, The Second Mother demonstrates, as too few films do, that men do not have a monopoly on quality cinema. The film, which is Brazil’s entry to the 2015 Academy Awards, was written and directed by 50-year-old Brazilian Writer/Director, Anna Muylaert; beautifully shot by DOP, Barbara Alvarez, edited by Karen Harley and brought to life by a trio of marvellous actresses, representing three generations of mothers.

Val (the famous Brazilian theatre, film and TV star, Regina Casé), now about 60, left her young daughter Jéssica with a relative in her home town in northeast Brazil to support her financially from a job in São Paulo.  For some 13 years she has worked as a live-in cook and maid to media celebrity Barbara (Karine Teles), and privately wealthy, frustrated artist Carlos (Lourenco Mutarelli); and as a nanny to their affectionate, underachieving teenage son Fabinho (Michel Joelsas).  When we join the family, Fabinho is studying for his college entry exams, but still curls up in bed with Val, dependent on her advice, encouragement and head massages.

While the family value Val, she, along with every maid in Brazil, has been programmed to respect the strict physical and psychological division between servant and family.  Val can never eat with the family or even sit at the kitchen table and despite the heat, she is not allowed in their garden pool.

Then one day Val receives a phone call from Jéssica (Camila Márdilla), who plans to take her college entry exams and hopes to live with her mother while preparing for them.  Mother and daughter have not seen one another in ten years and Val is thrilled.  When she gingerly asks Barbara if Jéssica could temporarily stay in her room, Barbara not only welcomes the news, but insists on paying for a new mattress. But Jéssica brings the nature vs nurture debate into the picture when her beguiling personality and failure to conform to type forces both Val and her employers to face some awkward truths.

Muylaert’s ability to imbue her humorous satire with serious issues is supported by the astute architectural camera work which features the house itself as a supporting character. This is fitting as the famous architecture of São Paulo, like the framework of society, plays a key role in the film. The contrast between colour and darkness, good and bad art and decor, expensive and kitsch dishware, cramped and open spaces, rain and sun shine, is, at the brilliantly directed final scene subverted, leading us to the realisation that freedom is not a space or construct, but a state of mind.

The acting is superb, with Casé and Márdila shining out from an already stellar cast. Along with these performances Muylaert’s real achievement is both avoiding any of the formulaic trappings of feel good comedies and in populating her film with compelling individualistic and three-dimensional characters all of whom have a crucial part to play in the story.  What drives most protagonists to believe in themselves and their power to control their destiny is something within themselves and their circumstances, but for Val, it is a triumphant phone call from her daughter.