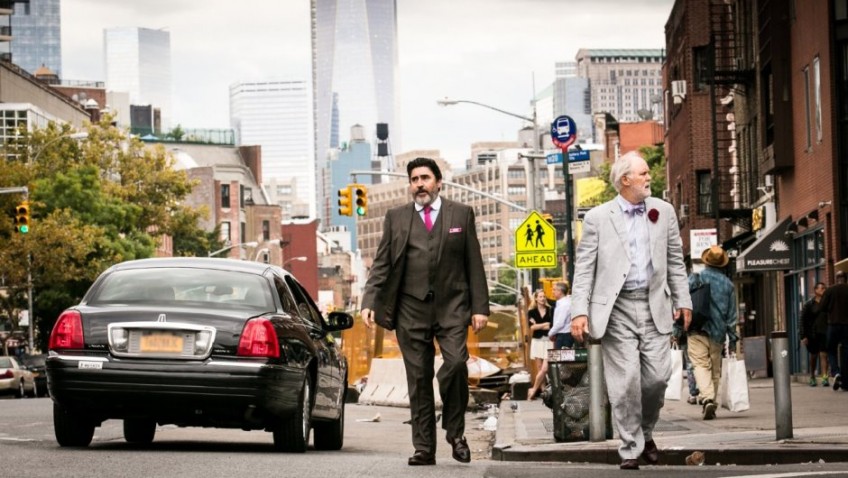 Everybody loves a lover in Love is Strange

Everybody loves a lover, the say goes, but there are limits as Director/ Co-Writer (with Mauricio Zacharias) Ira Sach’s bitter-sweet love story illustrates so insightfully.  The film challenges a couple of tiresome stereotypes, too, in this story of a devoted couple whose marriage ironically spells the end of 39 years of happy cohabitation. Not all older people can look forward to a comfortable, secure and stress free retirement.

George (Alfred Molina), a 60-ish music teacher at a Catholic school, and Ben (John Lithgow), 71, a painter whose biggest fan is George, wake up together, feet intertwined, as they have for the past 39 years, but with nerves slightly more frayed.  It is their wedding day, and no one could be happier for them than Ben’s nephew Elliot (Darren Burrows) his wife, Kate (Marisa Tomei), a published author, their teenage son Joey (Charlie Tahan) and their same-sex cop neighbours Ted (Cheyenne Jackson) and Roberto (Manny Perez). After the ceremony they all gather at Ben and George’s coveted Chelsea flat for a joyous champagne celebration.

Then tragedy strikes when George loses his job. The Catholic school has tolerated his life-style, but must draw the line at marriage.  It is curious that George does contact a lawyer about this discriminatory treatment after 12 years of employment, but that’s not this mild-mannered man’s style.
Kate, who has made a speech crediting George and Ben’s happy relationship with her own marriage, responds generously when the pair admits to their friends and relatives that they have no savings and must sell their housing association flat at a derisory sum. She offers Ben a bunk bed in Joey’s room while George gets a sofa in the boisterous flat of the younger, partying couple, Ted and Roberto.

Love is Strange captures with a rare tenderness George and Ben’s loneliness while objectively exploring the inconvenience and disruption to the lives of those who have taken them in. Ben sums up his, and his hosts’ thoughts when he observes, ‘sometimes, when you live with people, you know them better than you care to’

If Ben and George represent love that has weathered the years and developed into a great friendship, Kate and Elliot represent middle-aged married love, while Joey, who is going through hormonal changes and a confused, rebellious period, represents young love. Sometimes, the film spreads itself too thin when you want the focus to be on Ben and George.  A touching and funny in which George pays Ben a visit and the two worry about the breaking Joey’s bunk bed, leaves you wanting more.

Sachs, who is gay, and whose previous films, such as The Delta and Keep the Lights feature gay themes and characters, makes the dialogue sound natural, true, and effortless.  There are no grand speeches or climaxes, just the soft, small moments that make up our lives, and change our lives.

It is hard to criticise this charming, beautifully acted film, but the ending is a bit of a let down. Proportionately, the percentage of characters over 50 who succumb to heart attacks in films (usually as a convenient device to get them out of the story) is far higher than in real life.