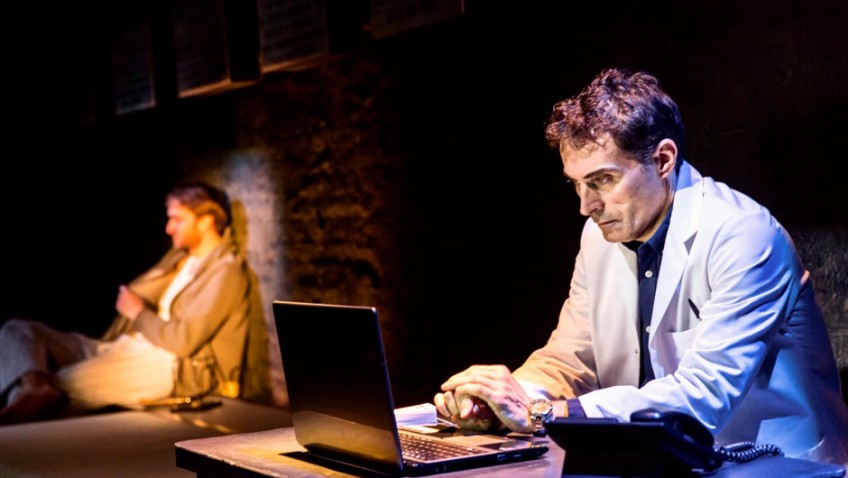 “I don’t love you anymore. Goodbye.”

Patrick Marber’s sexual merry-go-round for four people was first seen at the National Theatre in 1997. It transferred to the West End and was made into a film. This is its first London revival since then.

An obituary journalist, a stripper, a dermatologist and a photographer fall in and out of love and betray each other. Constantly swapping partners, cheating and lying, their anger, pain, jealousy, disgust and guilt knows no bounds.

“You’ve ruined my life,” says one of them. “You’ll get over it,” is the retort. The truth is brutal: “I don’t love you anymore. Goodbye.”

There is a humiliating practical joke, which provides the play with two of its funniest scenes. First, there is the set-up for a meeting and then there is the meeting itself, which backfires.

The language is always explicit and most explicit when the two men (one of them pretending to be a woman) are on an Internet chat room, having sex. Their texting is thrown up on a screen behind them so the audience can enjoy the crudity and the spelling.

Patrick Marber’s aphorism about women getting rid of excess baggage when they enter into a relationship and men needing a juggernaut to carry their baggage gets the loudest laugh.

Oliver Chris is the journalist. Rachel Redford is the stripper. Rufus Sewell is the dermatologist.  Nancy Carroll is the photographer.

The actors are excellent. So is David Leveaux’s production, acted out in minimalist settings with jump cuts and certain scenes played simultaneously.

I leave you with one further thought from Patrick Marber: “What is so good about the truth?  Try lying for a change.”