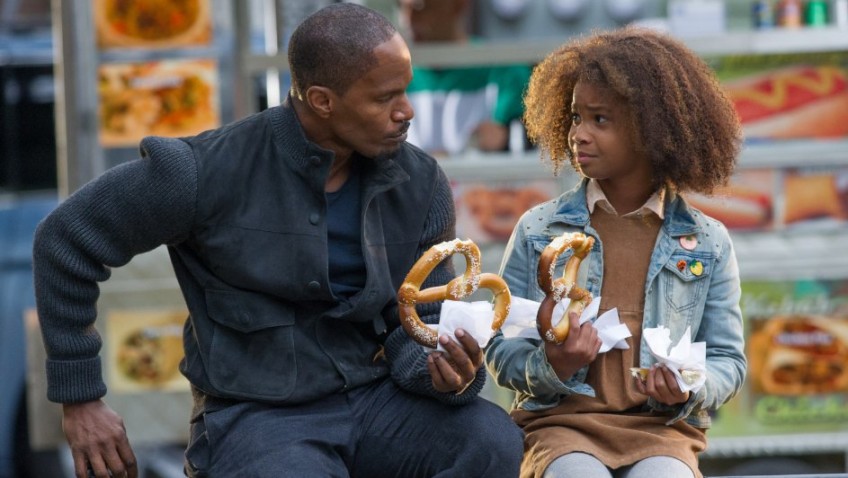 When six-year-old Quvenzhané Wallis burst on the scene in the weird and rather wonderful Beasts of the Southern Wild (2012), she was so charismatic, you could not take her eyes of her.  She exuded innocence and vulnerability that was matched by her resilience and an inexplicable aura that protected her without recourse to sentimentality or magic.

Her astonishing performance was recognised when she became the youngest Academy Award nominee in history.  Now aged 11, Wallis stars in Annie, an adaptation of the Broadway musical with new songs added and original characters and lyrics altered.  In Director and Co-writer Will Gluck’s (Easy A) hackneyed adaptation, Annie is less an innocent in a corrupt world than an entitled and headstrong manipulator obsessed by materialism.  While Wallis has a good voice, the same cannot be said of co-stars Jamie Fox and Cameron Diaz.

Ten-year-old Annie (Wallis) is one of five foster girls living in Harlem with Colleen Hannigan (Cameron Diaz), a 40-ish unmarried alcoholic who takes out her anger (we never learn why she is bitter) on everyone, including the girls.  Far from Harlem, Will Stacks (Jamie Foxx), a mobile phone billionaire and bachelor, is running a doomed mayoral campaign. He does not seem to like people anymore than Hannigan does, and the electorate pick up on this.   The exception is Grace (Rose Bryne), Stacks long-suffering personal assistant, who patiently awaits some sign of recognition, if not of warmth.

Meanwhile, Annie imagines life with her real parents (the song Maybe) and waits for them to appear once a week outside the Italian restaurant they used to frequent (this leads to the famous song, Tomorrow).  The restaurant owner brings her food to eat.  No one bothers her and the police never question what a ten-year-old is doing out alone after dark.  Life is no worse at home. When Annie and her roommates are made to clean their flat they sing ‘It’s the Hard-Knock Life’, but seem to have a good time with their chores, which, split between all of them, hardly seem oppressive.

One day, Annie is saved from the path of a car by Stacks (Jamie Foxx), whose courage and altruism is recorded by an onlooker and goes viral.  When his ratings skyrocket, Stacks’ PR and media consultant, Guy (Bobby Cannavale) suggests he seek out the girl and invite her to lunch for the cameras.   With his ratings climbing, Stacks decides to give Annie a temporary home in his enormous luxury pent house (‘I think I’m Gonna Like It Here’).   Annie acquires a cute dog to keep her company and Grace becomes a mother figure.  It’s not long before the would-be mayor genuinely wants to be daddy.  That happily-ever-after ending is forestalled by a hardly credible obstacle that will not be divulged here.

What has happened to Annie?  For one thing, the commentary on politics and  corruption that characterised the original is pretty pale for 2014, and for another, little Annie is no longer an abused child.  Hannigan might be a terrible foster-mother, but her flat is clean and spacious and Annie, who looks well nourished and goes to school, has girls her age as company.  Underneath, Hannigan is really a good person anyway, but that’s a spoiler! There are no men around the flat to molest Annie and no drug dealers on her front steps.

Nor is Annie a voice of purity and innocence.  She feels immediately at home in the big penthouse and all her problems seem to disappear with the security of money.  This might be summer, but there’s not a mention of school and not a book in sight in her bedroom.  When she belts out the song ‘Opportunity’ (a new song by Greg Kurstin, Sia, and Gluck) for a Stacks’ fundraiser, there’s something of the opportunist in her polished performance.   Gone, too, is Mrs Warbucks from the original Harold Gray comic strip.  While her Daddy Warbucks forms a paternal relationship with orphan Annie, Mrs Warbucks has no maternal instinct. In the movie, it seems that Mrs Warbucks has been folded into Mrs. Hannigan.

What is odd about this Annie is that there is no Mrs. Stacks.  With all the media scrutiny of his campaign and relationship with the little girl he saved, why is no one up in arms about a middle-aged, single man living alone with a ten-year-old orphan girl?   This creepy scenario is whitewashed by the wealth that surrounds their life together in his sterile gadget-driven penthouse.  It’s as though wealthy media personalities are always upstanding citizens.   It’s as though Jimmy Savile never existed.