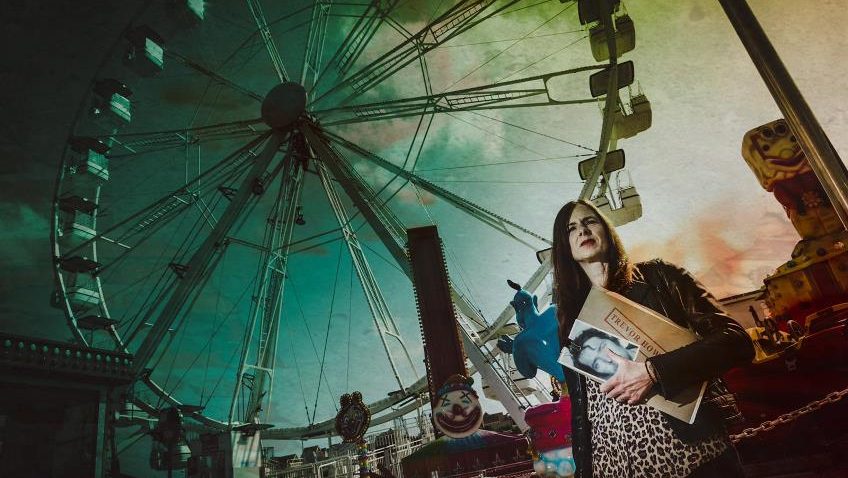 The series is hosted by Dr. Nell Darby, a crime historian and author who has dedicated her life to understanding the motives of killers. Over the course of her career, she’s developed a keen eye for spotting trends in a killer’s behaviour. Nowhere are these trends more striking than in the seaside towns of Britain’s coastline, which have always seemed to attract an extraordinarily high number of murderers.

Ahead of the return of the popular series, Mature Times interviewed Nell who was brought up near Birmingham – probably as far from the sea as you can imagine although both her parents are from the coast. Her mother loved history and took her round her local National Trust properties (Baddesley Clinton and Packwood House, in particular) when she was young, and although she wasn’t really interested in the lives of the wealthy, landowning elites, she was drawn to other aspects of the houses’ history – such as a bloodstain on the floor of Baddesley Clinton’s library, and the priesthole underneath its kitchen. She soon realised that it was the darker side of history that she was interested in.

Nell has a Phd which she achieved after being lucky enough to be awarded a three-year studentship at the University of Northampton to research crime in rural communities between the 17th and 19th centuries. One of her particular interests at this time was in looking at how ordinary women used the legal and criminal justice systems, and how they were represented not only as the victims of crime, but also as perpetrators and witnesses.

She is also a published author and her two recent books have been centred around women – she also specialises in gender. This interest was driven by the books that Nell read – she readily admits to owning several books written in the 1950s and 1960s – policing memoirs and true crime books – where women are barely mentioned; when they are, whether as victims or perpetrators of crime, they are written about largely by men, in what we would see nowadays as quite a sexist way.

However, although the appetite for books about infamous male serial killers doesn’t seem to have abated, there are an increasing number of books being published that take a more thoughtful, nuanced approach that look at women’s lives and roles. Hallie Rubenhold’s book The Five is a prime example, where she focuses on the lives of the women killed by Jack the Ripper; Laura Thompson’s book about Edith Thompson, who was executed in 1923 for the murder of her husband, is another great example of more female-centric crime writing.

She readily admits that whilst she enjoys watching crime and history programmes on television, she never had a huge ambition to be on television herself. She argues that she’s a crime historian first and foremost. However, her experience and research meant that she has been interviewed for several television and radio programmes, and her involvement in Murder by the Sea has been an extension of that. Working with a team who pride themselves on their research and sensitivity is really good, too.

Murder by the Sea is now in its fifth series and it focuses on stories about crime – it’s inherent in human nature, and it’s in our nature to want to scare ourselves, but we also want to work out the psychology of individuals who commit crimes. With Murder By The Sea, though, there’s also the juxtaposition of memories of the seaside – fun holidays, entertainment, sunshine, innocence – with these darker stories that make people think again about what the seaside is, and what can happen there.

Remember, seaside communities in the UK are designed to entertain the summer crowds, to take people away from their everyday lives. But outside of the summer season, there’s a different vibe: the carousels and fairground rides are empty or closed down; the people wandering around town are different; there’s a different feel, partly because of the weather, but also because these are not visitors out for a good time, but those living here all the time, trying to make a living, or those who have come to escape something else: something back at home or in their lives that isn’t going so well. Seaside towns in the winter are a different world to their summer lives.

We asked Nell which of the cases she investigated in this series was the most interesting to cover? And why? The name of Alma Rattenbury will not be familiar to many but she faced trial by media in the 1930s. Her husband was killed by her young lover, and this meant open season for the press, who went to town about Alma. She was Canadian, she had committed adultery, she liked excitement and sex – that meant that in the eyes of the newspapers, she was as guilty as her lover, and arguably, the result was worse for her than for the man convicted of the murder.

Given the nature of the crimes committed in the series we wondered, if in the opinion of Nell there was such a thing as the perfect crime?

Well, “perfect crimes” have been committed, in the sense that there are numerous cold cases where a murderer has never been identified. However, most murderers either make mistakes, or want approbation or publicity of some kind, and so tend to leave hints or clues about their identities. In addition, advances in forensic science means that nobody is safe – look at the case of the Golden State Killer, for example, where Joseph DeAngelo committed numerous murders and rapes between 1973 and 1986, and got away with his crimes until 2018, when he was finally charged. The use of genetic genealogy – which itself wouldn’t be possible without the development of DNA profiling and analysis – meant that eventually, this prolific killer was caught.

Hopefully, more Murder by the Sea will hot our screens in the future but Nell also has her next book, which is a history of the female private detective in Britain which is published this month. To find out more follow this link.

To find out more about the upcoming Series of Murder By The Sea click this link.