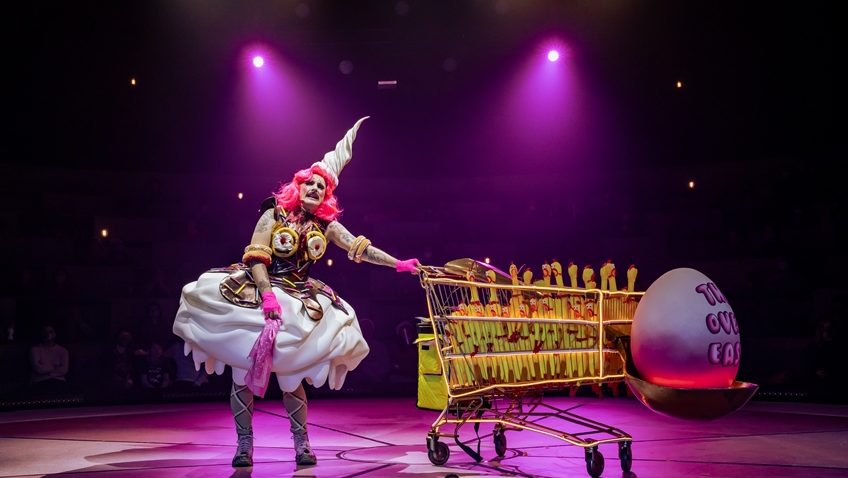 The one time the British nation goes to the theatre is during the Christmas period. For many people the only theatre they will ever see in their whole life is panto. In 2020 families hoped right up to the last minute they would be able to see a panto; but it was not to be. The National Theatre, however, came to the rescue.

Dick Whittington is the only pantomime based on a real person, Sir Richard Whittington (1354-1423) who became Mayor of London four times. There have been ballads and also a play about him in 1604. The first pantomime version was in 1812 starring the great Joseph Grimaldi.

The Olivier Theatre has been refigured into in-the-round and transformed from a 1,500-seater auditorium to just under 500 seats in order to accommodate socially distanced audiences.

In 1983 The National Theatre attempted to stage a traditional pantomime, Cinderella. It was not a success and The National never put on a panto again. Until now, that is.

The National was in the middle of previewing Dick Whittington when the government decided to close all theatres. On the last day before lockdown, they were able to film the production before a live audience and then show it on line for free over Christmas, a generous gesture, which was much appreciated.

The sad thing is that it wasn’t very good and certainly well below the standard you would expect from The National Theatre. The show had already been seen at the Lyric, Hammersmith in 2018. The weak script is by Jude Christian and Cariad Lloyd.

The one thing everybody knows about the legendary Whittington is that he had a big (wait for it, wait for it) cat. Dick is played by Lawrence Hodgson-Mullings and the cat is played by Cleve September. Dickie Beau has the pantomime dame role and he has all the Dick jokes.

Dick Whittington will be available on National Theatre at Home from 11 January for 6 weeks until 22 February. You can find out more by following this link.