Home / LIFESTYLE / What a triumph 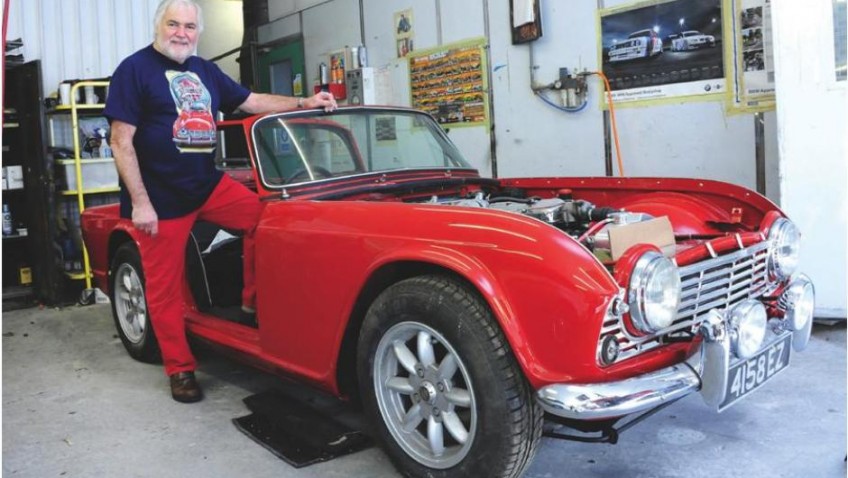 A widower looking for a motor to take part in a classic car rally in memory of his late wife truly triumphed – after he found the vehicle SHE learned to drive in on eBay.

Widower Rodney Kessell, 73, a retired car dealer, decided to undertake the Cape to Cape rally in France in memory of Jenny, who died of cancer in May last year.

He opted not to use his £30K E-type Jaguar, and decided to purchase a Triumph TR4, as the couple had owned one together over 30 years ago.

He went on eBay and was shocked when he found the exact car they had previously owned and Jenny had learned to drive in, a classic red 1962 Triumph TR4.

Rodney and Jenny had bought the car in the 1960s, but sold it when their daughter, Caroline, became too tall to fit in the back seat.

He quickly rang the seller to purchase the car, and set off on the 800-mile round trip to Cumbria to pick it up.

The stunned pensioner, from Truro, Cornwall, said: “The second car I looked at I instantly recognised as the one we owned because of its unusual registration number.

“I thought, ‘this is unbelievable’. I instantly recognised it. Straight away I realised it was definitely the same car, so I rang up the seller and bought it over the phone.

“I thought Cumbria was in Wales. I didn’t realise it was nearly in Scotland. The V5 document even has my name on it.

“It hasn’t done much more than 6,000 miles since I sold it. There are a few rusty spots on it, but they’re very well hidden.

“You have to keep restoring them, because the metal is very thin. They need restoring every 30 years or so.

“It’s a labour of love really, and I’m happy to do it because my wife loved that car.

“She only gave up driving it because it was impractical to drive my daughter around; she kept banging her head on the back window whenever it went over speed bumps.”

Now he has the perfect car, Mr Kessell is set to begin his journey to France to compete in the Cape to Cape classic car rally.

Rodney will set off from Cap De La Hague in France, and cover 1,250 miles in the 53-year-old motor, before finishing in Cap d’Antibes.

He said: “Jenny would have loved it. She was always keen on cars, and looked after them. She lived life to the full. She was very strong and outgoing.

“She would have really appreciated the fact that I am driving across France. The car is a piece of history and the memories of my life with Jenny will make the trip all the more sentimental.”

Rodney will be making the journey with his son-in-law, Jason Carne, and they are trying to raise at least £1,000 for MacMillan Cancer Support.