Home / HEALTH / Giving charity a run for its money 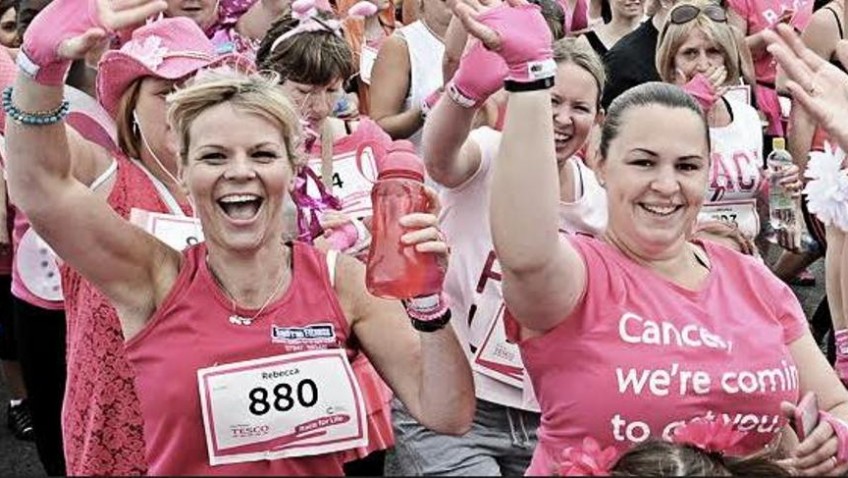 Giving charity a run for its money

Have you ever taken part in a charity fun run or sponsored a friend or family member? I recently went to watch my daughter run (or jog) in a Cancer Research Race for Life and was so impressed by the women who entered.

This particular event was for women only but all ages entered from young toned serious athletes to much older ladies, one even using crutches to get herself to the finishing line. You could walk, jog or run and some mothers pushed baby buggies. Many ran as a motley group holding hands to the end.

Everyone was encouraged to wear a personal sign on their back to indicate who they were running for to raise money for Cancer research. Most of these brought a lump to my throat as we have all lost someone to this terrible disease.

But it is not just races for one sex that are empowering.   Short, easy fun runs are the perfect chance for kids and adults to get active in a no-pressure event. Sometimes pushchairs and other wheeled modes of transport such as scooters are allowed too.

Running events are one of the most popular ways to do something for charity – whilst at the same time achieving a fantastic personal challenge! The most famous UK run is of course the London Marathon where thousand run the grueling course for their favourite causes.

Since the first London Marathon in 1981, runners in the race have raised more than £700 million for charity, making it the largest annual one-day fundraising event in the world.

Running the London Marathon and fundraising for charity has never been more popular – at the 2014 race 77 per cent of participants raised money for causes close to their hearts.

Raising money for charity can give purpose to running and serve as a goal to work towards. If you’re running just for the sake of it, you may start to doubt yourself and feel tempted to give up when the going gets tough. You’ll be more inclined to get up and go training in the cold, wet winter months when you know you’re supporting a good cause.

Remember, when you run for charity you’re helping real people and changing lives. Why not run for a cause that’s close to your heart? Maybe there’s a charity that’s helped you, or a loved one, through difficult times?

You can make a difference

Every year charities buy places in the London Marathon then give them to runners who agree to raise a minimum amount of money – these are called charity entry places and you can find out more about them here.

By using your ballot place to run for charity, the charity gets all of the money you raise and won’t have to spend anything on your place. However much you raise, your contribution will make a massive difference to your charity and the people it helps.

As well as raising money, running for charity can help raise awareness. You’ll be seen by hundreds of people wearing your charity’s logo on race day, and everyone who sponsors you will learn more about the charity and the great work they do. Charities rely on this kind of public exposure to build a good reputation and encourage people to donate.

Altruism is not the only good reason for doing a run; it will do you good too. As long as you ensure that you are fit enough to tackle the goals you have set yourself in terms of length of run, time and the actually pace you chose i.e. run, jog, walk or use a mobility aid and your own health will be improved.

And nothing beats the feeling of inclusion and satisfaction of taking part in a big event that makes everyone smile.