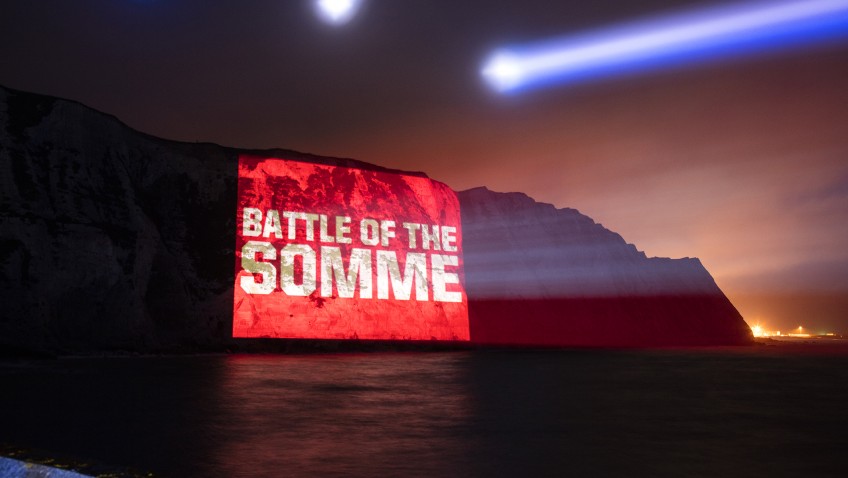 British history was beamed onto the White Cliffs of Dover today to mark the 100 year anniversary of the Battle of the Somme and the launch of a new initiative to support Armed Forces’ veterans.

The event was hosted by Iraq veteran, Hannah Campbell, to encourage the nation to remember and respect British military history, and to highlight the huge challenges facing many of her fellow ex-service men and women.

The tribute marking the key moments of The Somme led the anniversary as it remembered the 19,240 British soldiers that died going over the top on the first day of the battle, through to the one million men that were killed or injured on both sides during the 141 day conflict.

Hannah, patron of the new Veterans’ Foundation, lost her left leg following a mortar attack in Basra and was victim of a PTSD attack, triggered by a thunder storm, whilst appearing on Channel 4s Bear Grylls The Island.

It was a trauma witnessed by millions worldwide. It is through those experiences that she hopes to ensure public support for the armed forces past and present.

Hannah said: “July 1, 1916 was the heaviest loss in British Army history and those heroes gave everything to ensure our freedom. It is essential all of us remember that sacrifice. Lest we forget.

“At the same time, we must also be aware of what’s happening today, and those veterans that are in desperate need for help and support. We can’t change the past, but can learn from it and shape the future.

“I consider myself to be lucky to be alive and I want to use my experiences in a positive way to create change. That’s why I also beamed onto the cliffs a series of hard-hitting messages that followed the Somme tribute.

“From homelessness, trauma, poverty through to a basic need for retraining to make the transition to civilian life, there are so many challenges and so much work to do.

“My mission is to raise one million pounds in 12 months to fund projects that tackle the big issues. Our veterans deserve it. “Those hard-hitting pictures on the cliffs will form the basis of a national advertising campaign that pulls no punches and tells the public how it really is for many people who have left service.”

Hannah will attempt to hit her £1m target through the new Veterans’ Lottery which will fund many of the smaller specialist charities that are currently struggling to raise vital revenue.

“When people play the Veterans’ Lottery they know they will be directly supporting veterans and funding will go to a wide-range of projects that can change lives and save lives,” she said.

People can go online to play the Veterans’ Lottery and show their support for Hannah at www.veteransfoundation.org.uk/lottery