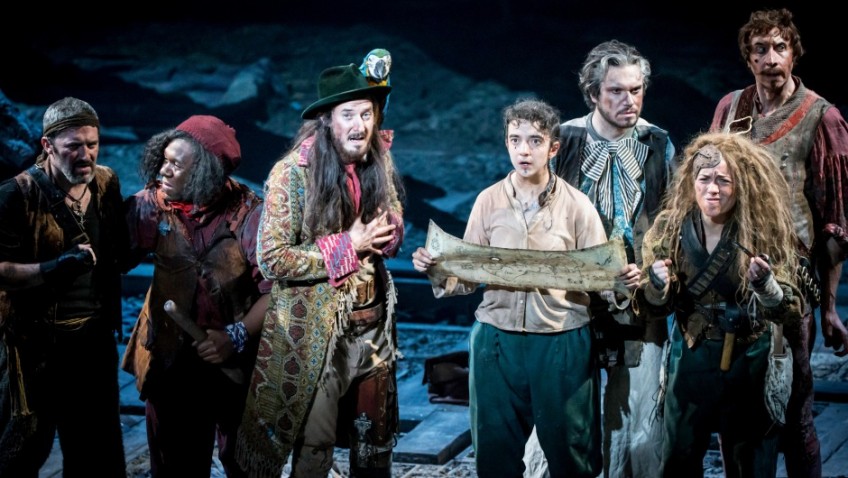 Treasure Island on stage is as dead as the proverbial parrot

Robert Louis Stevenson wrote his pirate story for boys for a weekly children’s literary magazine and called it The Sea Cook. It wasn’t until that it was published in book form in 1883 and he called it Treasure Island that it really caught on.

There have been endless pirate plays, pirate operas, pirate films and pirate ballets ever since.

If somebody says pirates, do you think fact, Francis Drake and Walter Raleigh, Blackbeard and Black Bart or do you think fiction, Long John Silver and Captain Hook? Do you see, in your mind’s eye, Douglas Fairbanks, Errol Flynn, Gene Kelly, Tim Curry or Johnny Depp?

Long John Silver has been played by such actors as Wallace Berry, Bernard Miles

Orson Welles, Charlton Heston and Jack Palance; but it is Robert Newton everybody remembers.

Newton’s Silver, a chronic alcoholic with rolling eyes and grinding voice, is, in the public’s imagination, still as definitive as Laurence Olivier’s Richard III, and as hard an act to follow.

Arthur Darvill, very naturally, does not want to give an imitation of Newton; but Brony Lavery’s poor and unexciting adaptation does not give him the opportunities he needs to develop his effete approach; and, what is more, he plays him with a metal prosthetic leg (what a cheat!).

The National Theatre has produced excellent entertainments for family audiences. This is not one of them. Watching Polly Findlay’s dull production I kept thinking that Robert Louis Stevenson’s adventure story can’t be as bad as this. The fights are abysmal. The best thing about it is Lizzie Clachan’s vast, gloomy, tusky set on a revolving, rising and falling, hydraulic drum.

I think if you are going to perform Treasure Island as a Christmas entertainment then it has to be much more fun, much more colourful, much more boisterous, much more of a parody of the pirate genre with lots of laughs, pantomime slapstick and rousing songs.

Jim Hawkins has been turned into a girl. It might have been more interesting to have had an actress play Long John Silver; not as a drag act but in the tradition of those real-life female pirates of the 18th century, Anne Bonny and Mary Read.