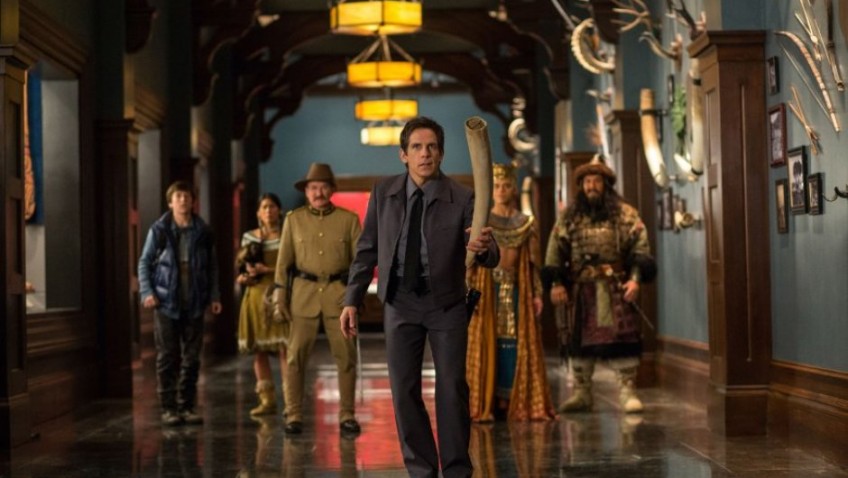 Not quite the historical magic of its prequals

Joyce Glasser reviews a Night at the Museum: Secret of the Tomb

The third and final instalment of The Night at the Museum franchise, starring Ben Stiller, begins with a terrific flashback, a kind of Indiana Jones Light.  If the rest of the film fails to capture the magic of that earlier franchise, it provides moderate entertainment, particularly for younger viewers.

In 1938 a young boy falls into a hole on an Egyptian dig, leading his father and a team of archaeologists to discover the sought after Tablet of Ahkmenrah.  The locals warn against removing the Tablet or ‘the end will come.’

Cut to a fund raiser at the Museum of Natural History in present day New York City and then to the British Museum in London, where the end really has come, at least for Larry Daley (Stiller)’s career if not the franchise.

Cameos from retired security guards Mickey Rooney (93) and Dick Van Dyke (89) and Bill Cobbs (80) can’t make up for the paucity of laughs and surprises, but the special effects and cast of amusing historic characters carry us along for a reasonably enjoyable ride.

Larry has been promoted from security guard Events Producer at the museum. He lives in a comfortable house with his teenage son (Skyler Gisondo) who, to Larry’s dismay, has decided to put off going to university and try his hand at being a DJ.

Larry has more immediate problems at work. He notices that the Tablet has been corroding, but does not associate that with the failure of the special effects at the end of Curator Dr McPhee’s (Ricky Gervais) big fund raiser.

Everything was going well until Teddy Roosevelt (the late Robin Williams) points his gun at Stiller; Orion, in the constellation over the dinner tables, shoots his arrow at Dr McPhee, and the guests run for cover.

When Larry finds a photo of the boy who fell into the hole in 1938 and learns that he was a security guard at the museum, he tracks him down, hoping for information about the Tablet. Cecil Fredericks (Van Dyke) is now in a retirement home with Gus (Rooney) and Reginald (Cobbs) – all retired security guards at the Museum.

Fredericks suggests that Larry question the parents of Egyptian prince, Ahkmenrah (Rami Malek). The trouble is, the pharaoh (Ben Kingsley) and his queen (Anjali Jay) were separated from their son and are now in The British Museum in London.

Larry persuades McPhee, who is desperate as he faces dismissal, to play along with his scheme to visit the British Museum so that Ahkmenrah can obtain the secret of the Tablet from his parents.

Nicky accompanies his father. Teddy, Attila the Hunt (Patrick Gallagher), Sacagawea (Mizuo Peck), Laa, a Neanderthal (Stiller), who resembles Larry with facial hair and bad teeth, and Dexter, the Capuchin Monkey, all sneak into Ahkmenrah’s crate. The diminutive models Jedediah, a cowboy (Owen Wilson), and Octavius, a Roman soldier (Steve Coogan), also go along as they live in Attila’s hat.

The team encounter a series of adventures and obstacles at the British Museum including a Triceratops skeleton and Sir Lancelot (Dan Stevens from Downton Abbey), who mistakes the Tablet for the Holy Grail and steals it.  As if Larry doesn’t have enough to deal with, when Teddy’s wax arms freeze and Ahkmenrah ages rapidly, he realises he is racing against the clock to get the Tablet from Lancelot.

Young and old audiences alike will spot the father/son theme running throughout the film (Neanderthal Laa calling Larry ‘Daddy’ and Ahkmenrah and the Pharaoh), and will not be surprised when the adventure weekend in London brings Nicky closer to his father.

There are other nods to adults scattered throughout the film, notably when Lancelot sees the stage musical Camelot advertised on a bus and leaps onto the stage threatening King Arthur (Hugh Jackman, as himself) to a dual over Guinevere (Alice Eve, as herself).   But the frantic pace and silly plot are a far cry from the prologue that harks back to Raiders of the Lost Ark and more genuine thrills.

Young audiences pleading with their parents to sign up to a night in a museum scheme might be disappointed when they find that they have to rely on their own imaginations to bring history to life.  Hopefully, Director Shawn Levy and the writers and creators Mark Friedman, Michael Handelman, David Guion, Robert Ben Garant and Thomas Lennon will have sparked and not spoiled the fun.