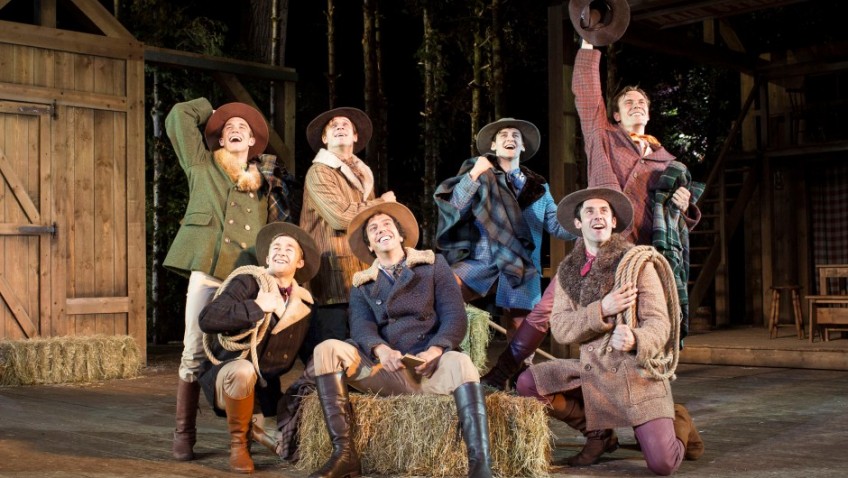 The fictional story of the abduction of the Sabine women by the Romans has been told by Livy and Plutarch and has inspired some great paintings by Poussin, Rubens, David and Picasso. It has also inspired a much-loved 1954 MGM film. Directed by Stanley Donen and choreographed by Michael Kidd it is set in the backwoods of Oregon in the 1850’s.

Adam, a woodsman, decides he needs a wife and goes to town to pick one up without telling her he has six dirty and uncouth brothers. He expects Milly to do all the cooking, all the house cleaning, all the laundry and generally look after him and them.

Adam then encourages his brothers to kidnap six town girls for themselves. But Milly makes certain that the boys and girls sleep in separate dormitories. The boys’ sexual frustration is very audible (and very visible) when they are singing “We Gotta Make It Through The Winter.”

Only feminists without a sense of humour will take the show’s blatant sexism seriously; but, nevertheless, it is interesting to see the present production kowtowing to the politically correct, and feeling it necessary to include a new scene in which the brothers formally apologise to the girls for abducting them.

The film’s success was due to its Oscar-winning score by Gene De Paul and Johnny Mercer and the casting of the brothers with professional dancers. The songs include “Bless Your Beautiful Hide”, “Sobbin’ Women” and “Goin’ Courtin’”.

The film is well worth seeing just for the witty, acrobatic vitality of Kidd‘s choreography and especially so in the memorable and exhilarating barn-raising sequence, when the brothers compete with the townsfolk for the girls.  The rivalry is expressed entirely in dance and ends in a classic slapstick brawl in which the barn comes crashing down.

It may be impossible for any stage production even to begin to compete with the 1954 film; but Rachel Kavanaugh’s revival, which has additional songs by Al Kasha and Joel Hirschhorn, is very enjoyable and perfect entertainment for the whole family.

The dancing, choreographed by Alistair David, is exuberant and the cast, handsomely led by Alex Gaumond and a feisty Laura Pitt-Pulford, has considerable charm.