Home / LIFESTYLE / The art of glass 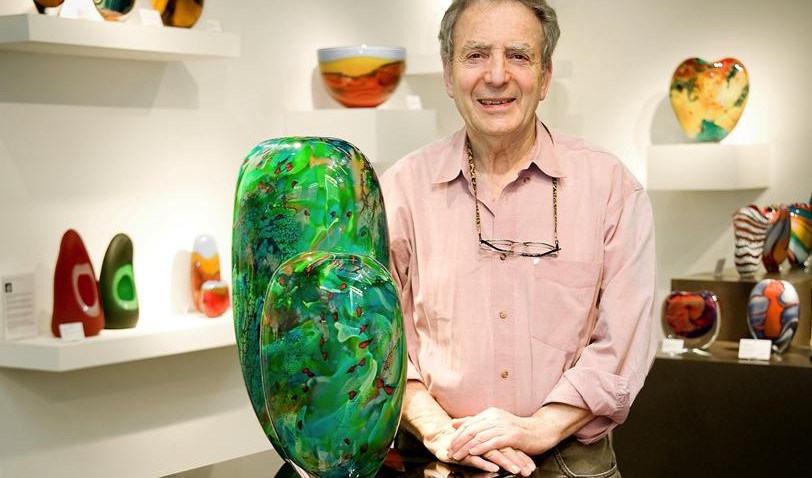 The art of glass

Peter Layton is one of the world’s most widely respected glass artists and he has done more to promote glassmaking as an art form than anyone else in Europe. He has influenced, encouraged and nurtured several of this country’s leading glassmakers and has inspired many more internationally. With his 80th birthday approaching, Peter remains extremely active and is regarded as the ‘grand old man of glass’.

Peter runs the London Glassblowing Studio in Bermondsey like a collective where glassblowers are free to use the kilns to create their own work and develop their skills as well as work on pieces that help to pay the vast energy bills.

He has always put creativity before the need to be commercial, which is why the Gallery is an Aladdin’s cave of unique and surprisingly affordable works of glass art. Much of the richly coloured work is his own, which can also be found in museums, galleries and exhibitions across the UK, Europe and America.

Talking with Peter I was fascinated by the exquisite glass art work he produces in his studio and was inspired to own a piece for myself. It was the feeling that your life won’t be complete unless you have the object of your desire.

The concept of glass as art has been diminishing lately and many of the studios who worked in this medium have closed down. The only name that most remember is Murano, which is now world famous. The work produced by the London Glassblowing studio surely deserves equal recognition.

Peter draws a lot of his inspiration from paintings by other artists and was commissioned recently by the Royal Academy and has been motivated by the words of Monet, Gauguin and his long term friend David Hockney. Peter actually knew the Bradford artist when they met at the local Art College, as they both came from the same area in West Yorkshire, and they have remained friends ever since.

He has been working in glass since the late 1960s and in 1969 he helped build the first furnace at the Glasshouse in Covent Garden. In 1976 the London Glassblowing Workshop was opened and has now moved to Bermondsey Street where it is thriving. Peter shows no signs of slowing down despite his age and remains committed to his art, producing contentious works highlighting the futility of war and conflict.

As well as his artwork Peter has undertaken commissions for large sculptures and lighting installations in restaurants and cruise liners. Some of his ideas for his work have come from a book of overhead photographs of natural phenomena such as reefs and glaciers.

I found the man behind the artist totally charming and engaging. He is a proud father to his three children who have pursued their own artistic careers. But he did hint that he has hopes that perhaps his daughter may follow him into the glass studio.

Peter’s works use stunning colours and shapes and if you want to see more you can visit his website: www.londonglassblowing.co.uk.