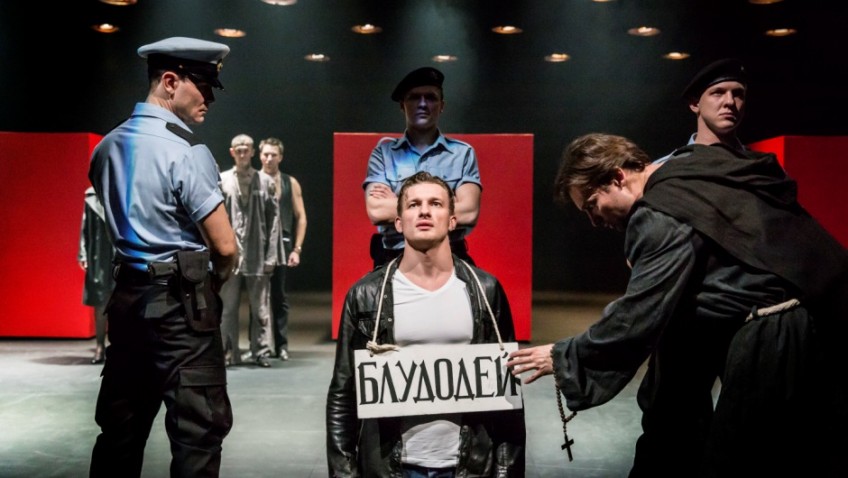 Shakespeare is acted in Russian directed by a renowned English director

Shakespeare’s dark comedy, Measure for Measure, is a problem play and one of the major problems is the Duke, who has ruled Vienna so badly that it has become notorious for its vice and corruption. What are you to make of such a man who then has the gall to run away, leaving his deputy to clean up the mess and carry out the reforms he should have enacted years ago?

Shakespeare’s satire on the tyranny of power and the tyranny of flesh is also a Christian parable on mercy and forgiveness. The Duke, at a realistic and at a symbolic level, represents Justice and the Church. As far as I know, no great actor has ever wanted to act him.

Declan Donnellan and Cheek by Jowl can always be relied on to come up with something different. In his modern dress production for the Pushkin Theatre company the Duke (Alexander Arsentyev) comes across as a weak and frightened man who, when he returns to Vienna in disguise as a friar, is horrified by what his deputy (Andrei Kuzichev) has unleashed.

In the very final scene, which is staged as a political rather than as a religious exercise, he is given the full red carpet treatment and behaves like a petty tyrant trying so very hard and falling to win back the approval he never had.

The special feature of the production is that the whole cast when they are not appearing in a scene remain in a tight bunch as constant observers and liable, when a new scene needs to be set up, to move at speed across and round the stage, sometimes in waltzing unison.

The biggest surprise comes when a young man is in prison and condemned to death for having got his girlfriend pregnant. He is so angry when his sister (a novice about to take her vows) tells him that she won’t have sex with the deputy in order to save his life that he attempts to rape her.