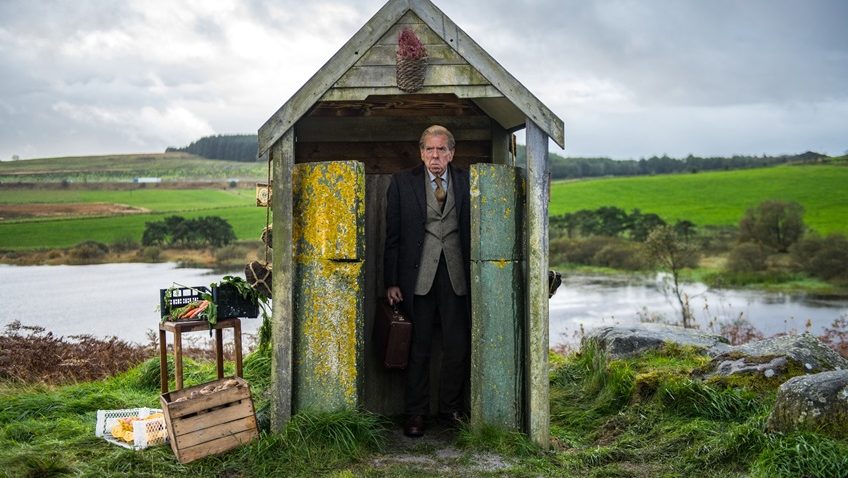 Timothy Spall gives an excellent performance, but you may end up counting buses.

If you’ve ever pored through the photograph album of a recently widowed relative, imagine how it would feel if the relative were a total stranger – and a fictitious one at that. There’s something of that feeling in Gillies MacKinnon’s The Last Bus. On a journey punctuated with nostalgic montages in flashback form, widower Tom Harper (Timothy Spall) travels from John O’Groats to Land’s End to return his dead wife’s ashes to a special spot. There are, happily, an increasing number of films for the grey market, and now we have one for the moribund market.

In 1952 young engineer Tom Harper (Ben Wing) and his lovely wife, Mary (Natalie Mitson) say goodbye to their home in Cornwall to put a distance between them and tragic events that affect their life. Mary takes distance very literally and they uproot to the opposite end of Great Britain. In flashbacks we see the now elderly Tom (Spall) watching Mary (now played by Phyllis Logan) tending their garden, where she dies. Tom looks out on a symbolically abandoned garden, and we cut to a cottage full of cardboard packing boxes.

Boarding the first bus, Tom has a small satchel that he protects with his life. It does not look like he is moving back to Cornwall but going on a short visit. If the contents of the satchel are no mystery, the reason for travelling light, and his race against the clock to get to Cornwall remain a mystery somewhat longer. You can’t call it suspense, but it does help pique our curiosity.

But before that, Tom’s bus journey, like any road movie, is an opportunity to gauge the pulse of a society. Tom encounters elder abuse, young thugs, charming young people, indifference and many acts of kindness. One generous family even invite the stranger home when he refuses to go to hospital after a series of mishaps.

In some respects, Tom reminds us of Nicolas Cage’s character in the recent film Pig. He spends a good deal of the film shocking people with an untended head wound and scruffy, dirty clothing because he is a man on a mission and doctors are just a waste of time. As noted, toward the end we discover the reason why, like Dr Richard Kimble, Tom avoids medical attention and escapes from hospital.

If the film includes episodic interactions between Tom and a sampling of the UK population, it also wants to highlight the charitable, guileless, non-judgmental nature of Tom Harper, who turns adversary into bonhomie and looks for the good in everyone. But he is not a sap: he’s ready to defend himself, his dignity, and particularly his satchel.

This old, unusual, feisty, yet vulnerable man winding his way southwest, naturally attracts the attention of those who must capture everything on their phones and post it on social media. Soon, unbeknown to Tom, he is a kind of cyber celebrity. Ironically, this rings true.

Director Gillies MacKinnon, who in the 1990s gave us Regeneration and Hideous Kinky, chose, for his last feature, a misguided remake of Whisky Galore. The Last Bus is more engaging and sincere, but it is equally lifeless and hard to swallow.

You have to wonder, why, if Harper is under such time pressure, he doesn’t take the train. It couldn’t be money. If you consider that Tom was an engineer, working for his entire life, he must have a decent pension and the mortgage on their house would have been paid off long ago. They had no children and Mary was not in an expensive care home, she just dropped dead. Moreover, he and Mary were not exactly spendthrifts.

Perhaps scriptwriter Joe Ainsworth, who is best known for soap operas Brookside and Holby City, felt that by opting for the bus, he could include more life experiences en route. But no one can say that trains – Murder on the Orient Express, From Russia with Love and The Lady Vanishes – could not provide a similar number and variety of adventures.

Taking the train, Tom could still stop off at the motel where he and Mary had their honeymoon. In one of the best scenes in the film, Tom arrives at that downmarket hotel only to find that the rude owner has no record of his specific room booking. To add insult (and irony) to injury he is subjected to loud lovemaking from the bridal suite that he and Mary stayed in decades earlier.

If you are over 60/65 and do a lot of travelling, note that, rather astonishingly, OAP Tom intends to make the journey using his free bus pass. If sentimentality is not your thing, don’t get on board. If you are a fan of Timothy Spall, take the journey for the sake of his excellent performance.