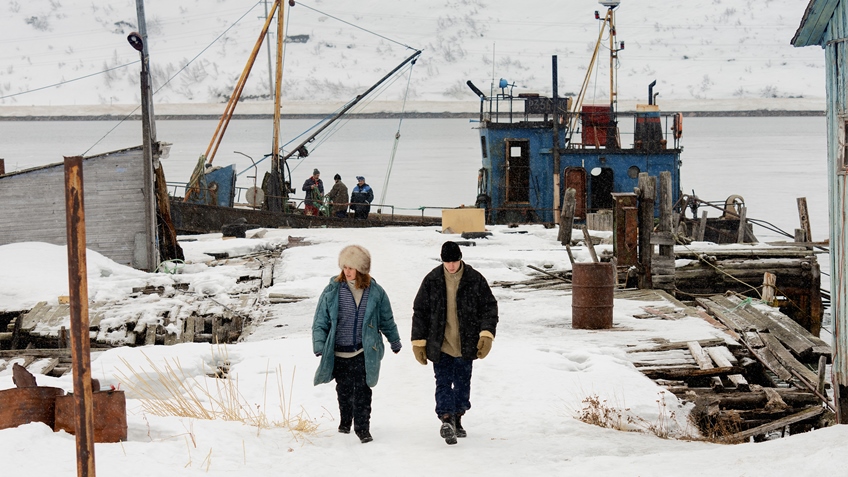 Some of the best – or at least the most fun – films of all time have taken place, entirely or in part, on a train. Think back to Brief Encounter, North by Northwest, Murder on the Orient Express, The Station Agent, and Before Sunset to name a few. Two of Alfred Hitchcock’s most enjoyable films, The Lady Vanishes and Strangers on a Train suggest that trains are not only places of romantic encounters, but danger zones.

Director Juho Kuosmanen’s entertaining, cunningly unpredictable and atmospheric Compartment 6 makes the most of the train journey due north, from Moscow to the Arctic port of Murmansk on the Barents Sea. We have the requisite encounters, danger zones and an unassuming story of an enigmatic relationship that draws out the best in two drifting, lost souls.

Finnish Archaeology student Laura (Seidi Haarla) is visiting her girlfriend Irina (Dinara Drukarova), a literature professor in Moscow, but she feels excluded from the literati at the party Irina is throwing and, increasingly, from Irina, who, last minute, tells Laura that she cannot accompany her to Murmansk. Laura hoped to combine work with pleasure by studying the renown petroglyphs of Murmansk. Irina urges her to go as the sleeper train and hotel at Murmansk are already paid for.

The train is about as far from the Orient Express as you can get. In the tiny compartment where Irina should have been, is a crude, young Russian miner returning to work in Murmansk. His name is Ljoha (Yuriy Borisov), and he is busy popping pills, filling the room with smoke, and getting progressively inebriated, adding to the collection of empty vodka bottles around him. The toilets are filthy with no running water and when Laura seeks a breath of air at the door, the stern and hostile conductor Natalia (Julia Aug) is always there like a prison guard.

Laura seeks refuge in the dining car until that closes and she is forced to return to the cabin. Complaining to the conductor that she cannot sleep due to the miner’s drunken groans, the conductor replies, ‘Do you think you have a choice?’

Gradually Ljoha grows curious about this grave and sober woman who is always taking pictures with an expensive camera. Lovesick Laura, who has resolved to return to Moscow is getting the hint that Irina does not want to pick up the phone. The conversation is what you might expect between two strangers who never plan to see one another again. Ljoha tells Laura that mining is a means to end as he is saving to open his own business – without specifying what that will be. He asks if Laura has a boyfriend, to which she replies ‘Yes, a professor of literature’ and is more impressed with that answer than is Ljoha.

While Laura’s Russian seems very good, Ljoha knows little Finnish, and they play a translation game. She enacts a modicum of revenge for her sleepless night when she tells him that “haista vittu” means “I love you” when in fact it means, “F***k you”.

Compartment 6 cannot be called a two-hander because writers Livia Ulman and Andris Feldmanis enrich the journey with supporting characters on and off the train, each having a specific role to play in Laura’s journey of self-realisation.

When the train stops for a 24-hour layover, Ljoha invites Laura to visit a very special friend of his where they can sleep in real beds. Throwing caution to the wind, she decides to go, although Ljoha has been drinking and the car looks stolen. ‘Do you think I am a bad man?’ he asks her. ‘Well,’, she replies, ‘I know what I have seen.’

Kuosmanen creates suspense as Ljoha drives Laura along icy, dark roads to this unknown destination. He wants us to become alarmed, only to craftily show us how easy it is to form erroneous impressions based on prejudice and familiarity.

Laura feels more comfortable with Saska (Tomi Alatalo), a Finnish musician who cannot pay his train fare than with Ljoha, and Ljoha notices that she is hesitant to leave her belongings behind in the cabin. When Laura takes pity on the guitar player and invites him to share the cabin for the night, we sense that Ljoha is jealous, as though he has been rejected, but from what he does not know. Before long Laura learns a lesson from this encounter as well.

Ljoha works in Murmansk, but has never heard of the petroglyphs, and is amazed that someone would be making such a long journey just for that. Laura justifies the expedition, having quoted a man who said, “to know yourself, you need to know your past.” But as the fragile relationship with the younger man develops, Laura grows uncertain about who she is and whether it is the past that can help her discover that.

Laura’s vision for her holiday with Irina fades and the sightseeing plans that she talks about so passionately prove fundamentally flawed. But in the bleak, snow-covered tundra where the sun seldom shines, Laura becomes aware that life is what happens to us when we are making other plans.

Juho Kuosmanen’s previous film, The Happiest Day in the Life of Olli Mäki, won the “Un Certain Regard” award at the Cannes Film Festival for new feature filmmakers in 2016. In Compartment 6 Kuosmanen eschews the stock deadpan Nordic humour of that charming film and comes up with a more complex love story: one that refuses to define the relationship between its protagonists – and contains the best closing shot of any film this year.