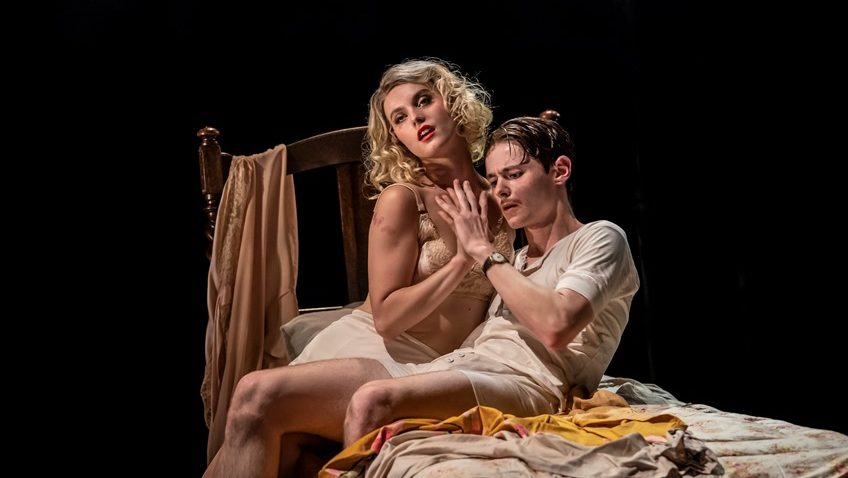 The Midnight Bell, devised and directed by Matthew Bourne to music by Terry Davies and mimed to pre-recorded period songs, is billed as “intoxicated tales from darkest Soho.”

20 years ago, Bourne did a brilliant job in the Play Without Words when he adapted Joseph Losey’s film, The Servant, starring Dirk Bogarde and James Fox, for the stage.

Bourne now turns his attention to Patrick Hamilton, the novelist of the homeless, for another play without words. Theatregoers and filmgoers will know Hamilton for two excellent murder thrillers: Rope and Gaslight, the latter filmed twice, once in England with Diana Wynyard and Anton Walbrook; and again, in America with Ingrid Bergman and Charles Boyer

The Midnight Bell is a pub, where people who are combating feelings of isolation and loneliness and searching for love can meet. The characters include a waiter, a barmaid, a prostitute, a lonely spinster, a cad, an out of work actor, a schizophrenic, a chorus boy and a policeman. There are six interconnecting relationships. It’s the gay relationship that makes the strongest impact.

The atmospheric locations change smoothly from pub to boarding house to street and back again. The set and costumes are by Lez Brotherston. The lighting is by Paule Constable.

The non-verbal storylines rely on body language, acting and instant characterisations by a talented ensemble rather than on extended choreography; and the lack of extended choreography may disappoint some people. The movement, however, is always interesting and there is some delightful period dance hall dancing to open the second half.