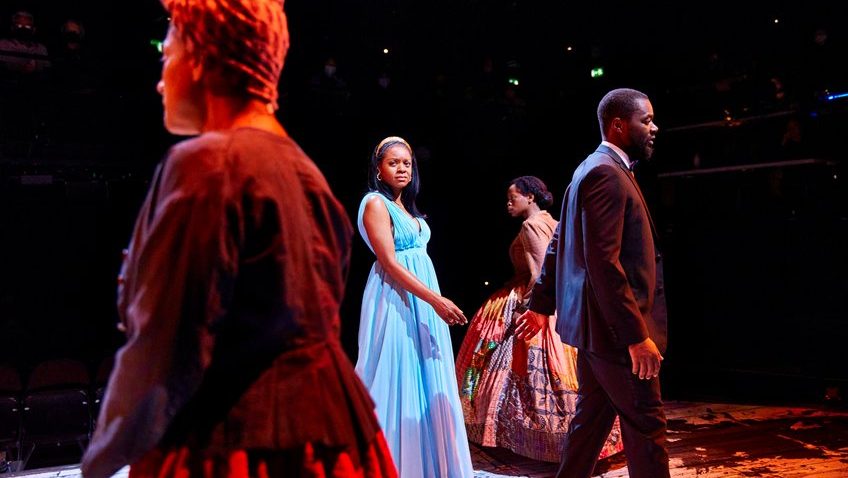 The starting point of Rockets and Blue Lights is The Slave Ship, a painting by J M W Turner which was exhibited at the Royal Academy in May 1840 when he was 65 years old.

Many presume Turner was inspired by the Zong Massacre in 1781. Running short of drinking water, 130 slaves were thrown into the sea to drown. The ship’s owner then tried to claim insurance on the dead.

The painting, atmospheric, turbulent, typhonic and, when you look more closely, horrific, is a magnificent blaze of colour and open to many interpretations. “If I were reduced,” said John Ruskin, “to rest Turner’s immortality upon any single work, I should choose this.”

Winsome Pinnock’s politically emotive play, very much in tune with Black Lives Matter, is about the British slave trade. Jumping backwards and forwards in time, mixing the dead and the living, mixing fact and fiction, and with 10 actors playing 25 roles, it is not the easiest play to follow. There are too many characters. It needs editing and reworking.

The production at the National Theatre is a co-production with Manchester’s Royal Exchange Theatre where it was seen very briefly in previews in 2020 before Covid closed everything down.

Miranda Cromwell directs a fine ensemble. Kiza Dean plays a modern actress who has been cast as a slave in a film based on the massacre called The Ghost Ship and she wants the film to be truthful and not pander to the movie bosses’ distortions. There is a splendid moment when you think you are watching the slave in reality and find you are watching the actress in rehearsal.

Karl Collins plays a Victorian black sailor who boards a merchant ship, only to discover too late that he is actually on a slave ship long after slavery has been abolished in the UK. Rochelle Rose plays the wife he leaves behind.

Paul Bradley, who plays Turner and the actor playing Turner in the movie, was indisposed and the two roles were read by Lloyd Hutchinson, who bravely stood in at short notice. The performance has considerable promise.