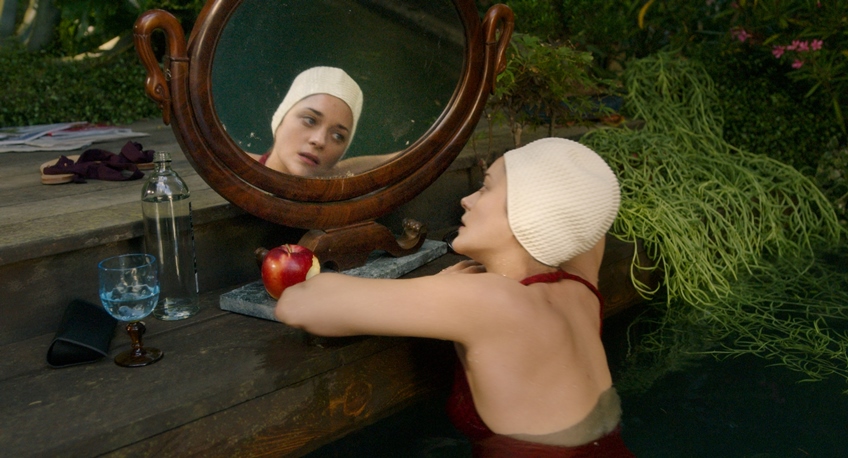 Leos Carax’s bonkers musical is written by the septuagenarian Sparks brothers, but young Devyn McDowell is the stand-out.

Start with the plot of A Star is Born and mix in a love child borrowed from Pinocchio (or The Omen) and dialogue sung by the actors, as in La La Land. Then add in the script and music written by the septuagenarian brother duo, Sparks, and have Sparks themselves appear in the Prologue singing, So May We Start? with the actors to break the fourth wall early on. This is just part of Leos Carax’s bonkers recipe for Annette.

Wait, you say, who are Sparks? If you haven’t seen Edgar Wright’s terrific, new documentary The Sparks Brothers, and you’re under 50, it’s a fair question. The American brother-duo have released 25 albums in the past 50 years of touring the world, but never realised their dream of scoring a movie. Unfortunately, Wright’s movie is a much better advertisement for Sparks’ undeniable talents than is Annette.

Director and co-writer Leos Carax (Holy Motors, Les Amants du Pont Neuf) is 60 and this, his sixth feature, bags one of America’s hottest stars, Adam Driver (Marriage Story, Blackkklansman). And it is first film to be completely in English. But otherwise, if Carax’s films are variations on the theme of love thwarted by self-destructive characters, Annette fits the mould.

In his routines (which he performs in a bathrobe), stand-up comedian Henry McHenry, (Driver), blurs the line between self-confessional, shock tactics and humour. In Carax’s oppressive fantasy world, McHenry is a super-star. And he is dating up-and-coming opera sensation Ann Defrasnoux (Marion Cotillard).

In the film’s opera performances, you see Cotillard, but you hear opera singer Catherine Trottman. When, however, in one of the film’s long, visual montages, the lovers sing the repetitive, We Are So in Love, the voices are Cotillard’s and Driver’s. They do not sing badly, but with the exceptions of Carax and Sparks, it isn’t anyone’s idea of a musical either. Cotillard won an Oscar for the Edith Piaf biopic, La Vie en Rose, but she was not cast for her voice there either and she was dubbed.

We watch the love-sick duo riding together on Henry’s motorbike singing We Are So in Love and then we see them making love with Henry looking up from between Ann’s legs to face the camera with the same droning ‘We are so in Love.’ It’s not a question of methinks he doth protest too much, but yes, we know you are in love – we see it.

After the highs of this power-couple romance, comes the rocky bit where alcoholic, Henry self-destructs as Ann’s fame grows. Finally, the tragic stage of A Star is Born, but here what follows is not just tragic, but murderous.

And the hackneyed plot is transformed by a twist – a big twist, in the form of their child, Annette. At first, the child is as artificial as the story and as creepy as the film’s Gothic sets in deep, rich hues of red and green. Carax gives us a puppet daughter with the joins in her arms visible, only nobody comments, nobody frets – nobody seems to notice.

In arguably the best scene in the film (until the terrific final scene), Henry takes his wife and daughter on their yacht for some quality time together. It doesn’t matter that we never figured Henry for a sailor. This is an excuse for a really scary Gothic scene and the song Let’s Waltz in a Storm that says it all. A storm rocks the boat, and the intrigue starts to resemble Polanski’s deadly thriller A Knife in the Water.

If Annette looks like Pinocchio without the nose, she takes after her mother, Ann, in the voice department. Annette has the voice of an angel – a miracle that Henry exploits at his peril. Here, it is necessary to introduce the other key character in the story, the Accompanist (Simon Helberg) who is introduced to us singing – what else? – I am the Accompanist. This poor chap is hopelessly in love with Ann with whom he works. He might have had a chance with her were it not for her irrational attraction to Henry.

Given the circumstances, it is a bit awkward when Henry solicits the Accompanist’s help to take Annette touring as the child wonder, an act designed to make them all rich, or rather to make Henry rich. Only the Accompanist is a nice guy and ends up more concerned about Annette than money.

So, what’s going on here? Why the deadpan literal titles to the songs and the clichéd plotting in a melodramatic style? Is Annette a satire on show biz marriages where the lack of chemistry between the lovers is apparent to everyone but them? Is it a satire on child performer exploitation or the cult status of celebrity stand-up comedians? It’s the only explanation but the film does not come across as a satire. Not only because it is not funny, but because it is not clever enough and too heavy handed to be satirising anything but Carax’s filmmaker style.

This is pure melodrama, with the gap between the action and our emotional reactions so great that we watch the characters emote and feel nothing. That’s a recipe for boredom, and were it not for Carax’s visual flair, the film would be more tedious than it is.

But then, in the final ten minutes of the film, a real miracle occurs in the form of child-actress Devyn McDowell, who will open your tear ducts just in the nick of time. It’s worth the wait.