Home / LIFESTYLE / REVIEWS > / FILM REVIEWS / Based on a cinematic, true story, Whisky Galore was just what the doctor ordered in 1949

Based on a cinematic, true story, Whisky Galore was just what the doctor ordered in 1949

Based on a cinematic, true story, Whisky Galore was just what the doctor ordered in 1949. In 1949, when bomb damage was still visible; when a deceased brother’s uniform still hung in the cupboard; and when rationing of everything – not just whisky – was a painful reality, you really needed your spirits lifted. And this was the true story that could do just that when turned into an Ealing comedy 66 years ago. The remake, alas, is more likely to sink your spirits along with the precious cargo. 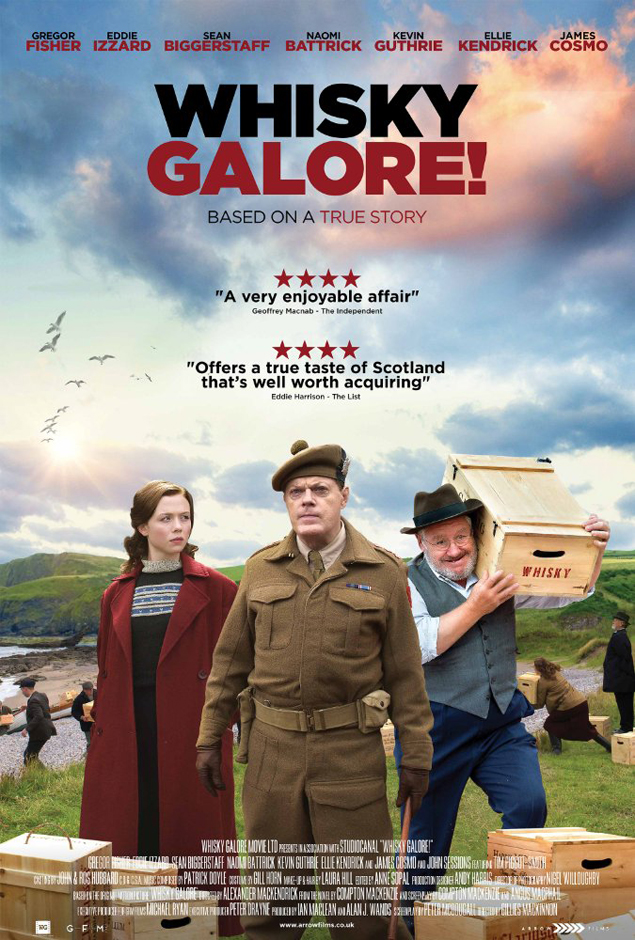 In 2017 the story needs a very good reason to be remade, and Gillies MacKinnon’s remake has not found one. You cannot even say that there really is a whole new generation (or four or five) waiting to discover Whisky Galore as the talent involved and the story – which is identical to the original — is unlikely to attract a new (or old) generation.

The small population of the Isle of Todday in the Outer Hebrides is nearly dysfunctional after their beloved Scotch whisky supply has run dry, and, under rationing, is unlikely to be replenished. This is an island with an older population brought up on the stuff and they more than rely on a glass or three to pass away the long evenings. News of a ship wreck fails to propel the islanders out of their depression, but when they learn that SS Cabinet Minister is sinking with 50,000 cases of Scotch Whiskey on board, the islanders mobilize for a daring operation.

The stuffy, humourless head of the island’s home guard, Captain Waggett (Eddie Izzard), takes on the thieves, who by now include Sergeant Odd (Sean Biggerstaff), the man he appointed to guard the wreck. Odd, an experienced officer, has recently returned from active duty to marry Peggy Macroon (Naomi Battrick). Unfortunately for Waggett, she is the daughter of the whiskey-loving postmaster (Gregor Fisher) who informs Odd that a man cannot marry without a whisky-fuelled wedding party.

In 1949, under producer Michael Balcon; the celebrated Ealing Comedy director Alexander Mackendrick (The Ladykillers, The Man in the White Suit) and the talented writers Compton MacKenzie (Monarch of the Glen) and Angus MacPhail (whose long list of credits include co-writing Hitchcock’s Spellbound and The Wrong Man) the original was a critical and financial hit in the UK and in the USA.

Unfortunately Director Gilles MacKinnon and writer Peter McDougall, fail to match, let alone improve on the original despite extending the film by a quarter of an hour. Eddie Izzard (played in the original by Basil Radford) is a notably unfunny Captain Waggett, however few of the actors are able to convince us that anything is at stake. The main problem is that in addition to a lack of relevancy, this remake lacks the essential ingredient of irreverent humour.