Home / TRAVEL / DAYS OUT / A wallow in memory lane 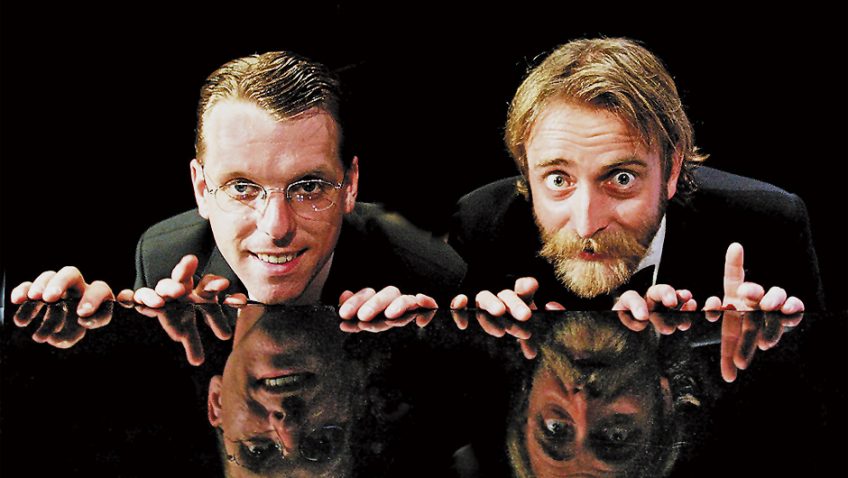 A wallow in memory lane

Who remembers Flanders and Swann? I had forgotten all about them until I heard Bryn Terfel sing one of their most famous songs, The Gas Man Cometh on the television the other morning. I discovered that I knew all the words.

My parents were keen fans of the duo and had the extended play records, so as children we absorbed the comedic words to so many well known tunes. Their humour has only slightly gone out of kilter with topically themed songs for their time such as the one about De Gaulle or Slow Train about the closing of the railway stations.

Most of their material, especially the animal songs, remain just as amusing and worthy of singing along to. Who can resist the chorus of the Hippopotamus song – mud glorious mud and the use of the non-silent consonants in the Gnu.

Michael Flanders was born in London on 1st March 1922 and as a young man he seemed to be heading for a successful acting career. He contracted polio in 1943 while serving in the Royal Navy Volunteer Reserve and for the rest of his life was reliant on a wheelchair. He made a career as a prolific broadcaster on radio and later television, and together with his old schoolfriend, the composer Donald Swann, he wrote successful songs in the late 1940s and early and mid-1950s.

Donald was born in Llanelli on 30 Sept 1923 into a family of amateur musicians, both parents being refugees from the Russian Revolution. His upbringing was one of Russian folk songs and four-hand piano reductions of the Russian and European Romantics.

He remained largely self-taught in spite of being an external student at the RCM while still at Westminster School. A contemporary, Michael Flanders, then a budding schoolboy actor, penned a school revue GO TO IT! to which Swann contributed music, enjoying a brief run at the Everyman Theatre, Hampstead during the Blitz. They went on to appear in revues in the West End of London. In 1956 they themselves performed some of these songs, along with new songs, in a two-man revue, At the Drop of a Hat. This show, and its successor, At the Drop of Another Hat, ran with occasional short breaks from 1956 to 1967 and played in theatres throughout the British Isles, the US, Australia and elsewhere. Recordings were made of these performances and released as records.

The pair with Donald at the piano and Michael traversing the stage in his wheelchair became loved and admired for their talent of taking pieces of classical music and adding their own humorous lyrics. Who cannot smile at the clever words of the song based on the lament of the French Horn player, Ill Wind, based on Mozart’s Horn Concerto. In mine and many other’s opinion as vocally clever as Gilbert and Sullivan.

In my research down memory lane I came across two young men who are keeping the spirit alive. Tim FitzHigham and Duncan Walsh Atkins have been performing the songs of Flanders and Swann since 2001 and fill theatres around the world with their tribute. Tim told me “It is a total privilege to be able to entertain audiences of all ages with the songs and it brings serious joy to me that we can carry on with this amazing performance. The two found the holy grail of comedy in the songs that still ring true today: the builder who is always late, the London transport system and the amusing animal anecdotes”.

So the genius of the ditties of the 1950s and 60s is brought to new generations who somehow sing along knowing all the words. I hope to catch their show At the Drop of a Hippopotamus shortly and recommend that you do too: there is nothing quite like it for cooling the blood!

To find out more or order a CD of the songs go to www.flandersandswann.info/booking.php and email the address given.