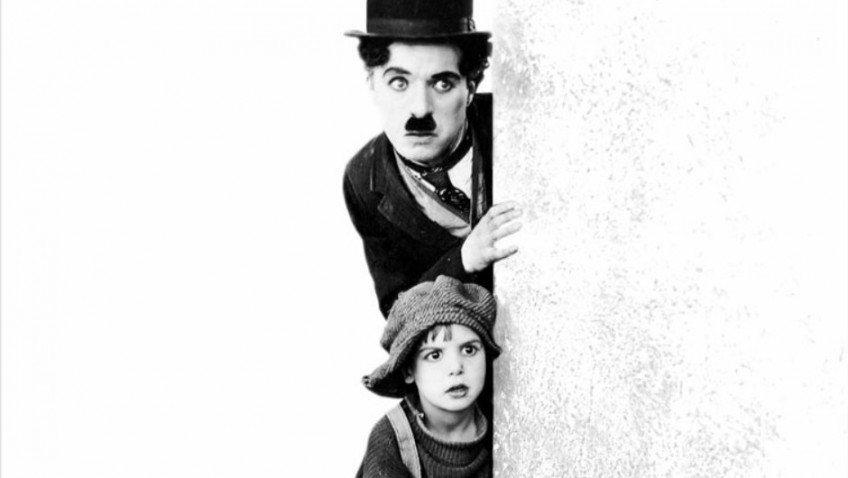 THE KID (Artificial Eye). Chaplin’s first long film, released in 1921, is the most autobiographical of his work. It was, he said, “a picture with a smile and – perhaps a tear” ; and indeed it ranks amongst his finest and most popular tear-jerkers.

The Tramp, a window mender (or rather a window breaker by trade) loves and cares for an orphan child. The film, which has more drama and less clowning than you might expect, is rooted in Chaplin’s own poverty and the Victorian theatre with its mawkish melodrama and its flying ballet set in a pantomime heaven.

5-year-old Jackie Coogan, the first of the Hollywood child stars, is memorable – especially in that moving moment when he is dragged off to the orphanage and he stands there in the cart, hands outstretched, crying his heart out. The Kid is as mmuch Jackie Coogan’s film as it is Chaplin’s.

The GOLD RUSH (Artificial Eye), released in 1925, is the film which Chaplin said he would wish most to be remembered by. The Tramp is a gold prospector in Alaska.

High spots include: a starving Tramp eating his boots and laces as if they were a gourmet meal: the blizzard which makes exiting through a door hilariously impossible; a crazy man mistaking the Tramp for a chicken; and a fight between two men in which the gun they wrestle with is always pointing at the Tramp; and then there is a miner’s hut teetering on a precipice and the panic of its occupants sliding down the floor as it tips.

Most memorable of all is the imagined New Year’s Eve dinner in which he entertains his guests with his celebrated dance of the rolls. The sequence was so popular with the public that the projectionists in the cinemas would wind back the film and show it again. In 1942 Chaplin added a commentary, which is a pity.

THE CIRCUS (Artificial Eye). The Tramp turns professional clown.  There’s pathos and farce, slapstick and sentiment. The film, released in 1928, is a catalogue of nostalgic gags, rooted in the circus, pantomime and music hall tradition.

Chaplin, inventive and physically agile, was always a great improviser and he gives the routines a Chaplinesque twist and rejuvenation when he replays such familiar sketches as the William Tell apple-on-head shooting, the Vanishing Lady from the cabinet and the Barber Shop custard-pie muck-about with shaving foam.

Chaplin has fun on a turntable, when he is hotly pursued by a policeman. There is also an amusing hall of mirrors sequence which is cleverly filmed so you don’t see the cameras and cameramen reflected in the mirrors.