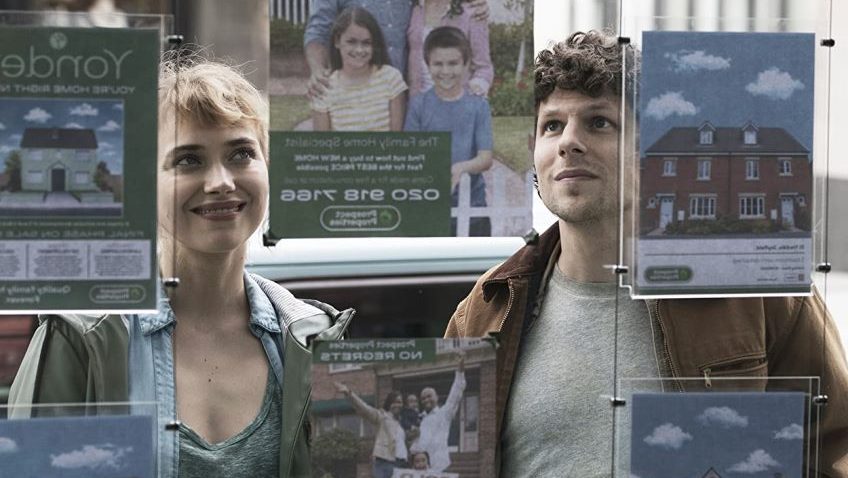 This compelling and ironically relevant suburban horror movie could use a second act.

There are so many films specifically set in the suburbs, that “suburb” movies could be called a genre. Though very different in tone, style, characterisation and, to some extent subject matter, Blue Velvet, Pleasantville, Revolutionary Road, Little Children, Grosse Pointe Blank, American Beauty, Happiness, The Stepford Wives, A Single Man, American Animals and George Clooney’s Suburbicon are dark warnings against any residential move other than out: while it’s still possible to escape.

In co-writer (with Garret Shanley) and director Lorcan Finnegan’s (Without Name, 2016) second feature, a young, unmarried couple, Tom (Jesse Eisenberg), a gardener, and Gemma (Imogen Poots), a primary school teacher, move in, or rather, are moved into the suburbs by the estate agent from Hell, Martin (Jonathan Aris). Vivarium is a chilling, riveting movie, but like the deep hole Tom digs in the lawn, hoping to escape, the filmmakers dig themselves into a hole with nowhere to go.

The title alone says it all. A Google search for the definition of vivarium tells us that it is “an enclosure, container, or structure adapted or prepared for keeping animals under semi-natural conditions for observation or study or as pets.”

In Finnegan’s film, the pets are an American couple, who drive to a new development called Yonder with Martin leading in a separate car. Martin is so weird that Tom and Gemma have to stifle their giggles. An hour after arriving, however, they are not laughing.

They realise they have been abandoned in a Shrek green cookie-cutter house in a sinister housing development of identical homes with leafless young trees and lampposts installed at regular distances. Yonder makes the designer new town, Assimilation, in The Addams Family look pleasant and diverse. The theme song for Assimilation, sung by colourful cheerleaders, is “what’s so great about being yourself/when you can be like everyone else?” In Yonder, there is no one else.

Stone cold silent street after identical street make up what Tom and Gemma soon discover is a labyrinth with no exit. When the car runs out of petrol, they follow the sun across the housing estate, only to end up back at number 9 because like the clouds, the sun is phony. You will notice that it never rains on the Astroturf lawn.

In a prologue full of ominous foreshadowing, Tom and Gemma meet outside the school where Gemma teaches and notice dead baby birds thrown out of their nests. Tom digs a little hole for the birds and buries them with a mock funeral.

But the life cycle, is not birth, marriage, death, because you don’t move to suburbia without having children. In the mysterious boxes that are deposited in front of number 9 by an invisible delivery person, the couple find household necessities and food – the same food, day after day. On day two, the box contains a baby boy.

Tom still has some of his gardening tools in the boot of his car and starts digging a hole under the Astroturf in hope of finding an escape route. Actually, he is not far off as we shall see. For Tom, it might be like digging to China, but it gives this former gardener a purpose in life and a routine. Each morning after breakfast with the “family” he goes out to dig. After a few days of this routine, he does not bother to go back indoors and sleeps at the bottom of the hole, coughing.

It is here that viewers may start to superimpose the climate of the Coronavirus on the film, which was, of course, conceived and shot long before. And yet, while the original social satire is rather obvious, this new metaphor works remarkably well and lends the film a new relevancy with the socially distanced food delivery and self-isolation. As Gemma and Tom discover, it is not easy being trapped inside your home with a little (and then not so little) monster (Senan Jennings and Eanna Hardwicke, both suitably creepy).

Tense and riveting though it is, Vivarium lacks a second act, and while you hope for a new plot twist, or some character development, there is just more of the same. Still, that’s not all bad as the film is taut and atmospheric, while the admirable Poots and Eisenberg keep us engaged and hoping for a miracle.