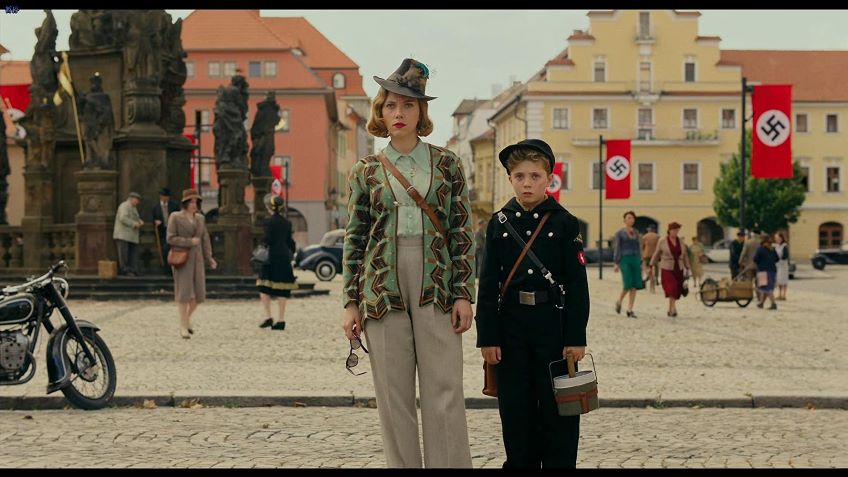 JOJO RABBIT (Fox Searchlight) will interest and divide audiences. Many will be offended by this World War II drama set in Nazi-occupied Austria, a satire on blind fanaticism. A 10-year-old Hitler Youth (Roman Griffin Davis), indoctrinated into believing Jews are inhuman, is shocked to find his mother is hiding a Jewish girl (Thomasin McKenzie) in the attic. The script traces the relationship he has with his imaginary best friend, Adolf Hitler, and the changing relationship he has with the girl. Taika Waititi, director and scriptwriter, also plays Hitler and very funny he is too in a Charlie Chaplin/Mel Brooks slapstick manner. Stephen Merchant is also funny as a creepy tall Gestapo officer. The film finds the balance between absurd comedy and poignant drama difficult to maintain.

SONS OF DENMARK (Eureka). Ulaa Salim directs a topical Danish political thriller about the rise of the far right and ethnic cleansing. The National Party leader says if he is elected prime Minister there will be forced repatriation of the Muslim community. There is, he says, only one civilisation and it’s ours. Neo-thugs are encouraged by his stance to attack immigrants. There are two main characters: a double agent (Zaki Yousef) and a disaffected teenager whose family has fled Iraq. The radicalised youth is encouraged to assassinate the National Party leader (a very convincing Rasmus Jberg).

MY LEFT NUT (BBC 3) is a coming of age drama with a difference. 15-year-old Belfast schoolboy discovers his left testicle has swollen enormously. Frightened he has got cancer and going to die, he tells nobody. His school mates, to his acute embarrassment, see the swelling and think he is just (how can I put it?) well-endowed. The teenage banter is laddish and crude. A sensitive issue is tackled with a light touch; but gets, with medical check-ups, more serious as it goes on. The script, three episodes, is based on a one-man show Michael Patrick did at the Edinburgh Festival Fringe. Nathan Quinn-O’Hare is excellent, facially perfect for the role. The performance is a notable debut and will, surely, launch his acting career.

VILLAIN (StudioCanal). The villain (Richard Burton) is a sadistic gay gangster, an amalgam of the Kray twins, Ronald and Reggie, who lives with his mother and has a S&M relationship with his bisexual lover (Ian McShane). Nobody thought much of this crime movie when it was released in 1971. 40 years on, it hasn’t got any better and is as bad as it always was. The camera doesn’t flatter a bleary-eyed Burton who is miscast and doesn’t look in good health. The film’s major feature is a brutal car robbery.