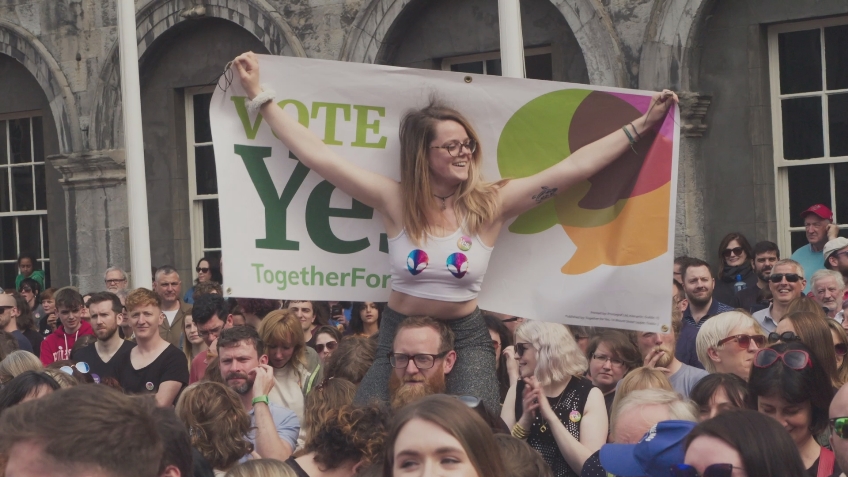 In Ireland, the 19th century Offence Against the Person Act handed a life sentence to anyone who facilitated an abortion. In the wake of 1973’s Supreme Court Decision in Roe v Wade, that was not enough. In 1983, by a 2:1 margin, the Republic of Ireland voted overwhelming to add the 8th Amendment to the Constitution giving the “unborn” the same right to life as the mother – making an abortion almost impossible. One problem was that “unborn” is an adjective not a noun. The other is that thousands of Irish women, many unable to travel and too poor to afford it, had no option but to travel to England for an abortion or give birth to an unwanted child. Nurses, doctors and Well Women clinics were even prohibited from giving abortion advice.

On 25 May 2018, by a 2:1 margin (66% to 34%) the vote was reversed. The cinema release of The 8th on May 25th 2021 marks the third anniversary of this ground-breaking vote. The documentary is engrossing and emotive as it traces the leadership, the strategies and campaigns, the human stories and the social forces that combined to propel this sea change during the 35 years between the two votes.

Produced and directed by three Irish, female filmmakers, Aideen Kane, Lucy Kennedy and Maeve O’Boyle (who also edits), The 8th does not claim that abortion is solely a woman’s issue. As campaign leader Ailbhe Smyth points out in a meeting, however, ‘All those who have spoken so far have been men, and men do not have babies. Who are men to tell women what to do with their lives and their bodies?’

The women’s liberation movement of the 1970s contributed to changes in Irish society where Church and State were complicit in treating women like second class citizens. But change was slow. As late as September 2016 thousands of women marched through Dublin chanting, “Keep your rosaries off my ovaries.”

By 2013, as we see, the situation improved as a result of several tragic milestones. In Case X of 1992, a 14-year-old girl was pregnant and suicidal after being raped by a friend of her father. She could not travel abroad, and it was illegal for anyone to help her. In fact, the RTE prohibited televised discussions of abortion, allegedly because a participant could accidentally provide advice and guidance.

Women took to the streets, outraged. In an emergency decision the Irish Supreme Court allowed the girl to have an abortion. As a result, the law was that a woman could have an abortion if there was “a real and substantial risk” to her life. The risk had to be to her life, not her health, and six doctors had to agree on the level of “risk”.

It was not until 2014 that this law was ratified under The Protection of Life During Pregnancy Act. In 2012 a happily married woman, Savita Halappanavar, was admitted to hospital where her doctor declared that a miscarriage was inevitable. Savita was not suicidal, but doctors dithered about whether her life was sufficiently in danger. Savita developed sepsis, and died (with the foetus) on 28 October, age 31.

People took to the streets. The Health Service Executive held an inquiry and recommended changes to the law and for doctors to be trained in the law.

Also, in 2013, former-academic and feminist Ailbhe Smyth, and “glitter activist” and entrepreneur Andrea Horan co-founded the Coalition to Repeal the 8th Amendment.

Smyth embarked on this onerous campaign as a legacy for her daughter and two granddaughters. She was thinking of the three and a half thousand women and girls who travel to Britain every year for abortions “in the most dreadful circumstances.”

Another milestone was the April 2017 Citizens Assembly of 99 “ordinary people”. The Assembly recommended to the Oireachtas that there be a referendum to change the article in the constitution that prohibits abortion in almost all cases. They added that if that is passed, that the country legislate for the general availability of abortion. Marches with slogans such as “I am a woman not a womb” supported this vote.

Historically, opinion was split between rural and urban, old and young, and religious and secular Ireland. The film shows us how this divide is addressed by campaigners to change hearts and minds. Their grass roots campaign considered psychology and human behaviour as well as analysed the other side’s tactics in order to counter them. A key aim was to get doctors on board (“the general public do not trust the church or politicians, but they trust doctors”).

Then there was the Magdalene Laundries scandal. The discovery of a mass grave showed how much the Church really cared about babies, children, and their young mothers: not much. A damning inquiry report of 2013 allowed the new “Together for Yes” campaign, led by Smyth with Grainne Griffin and Orla O’Connor, to appropriate the words “caring” and “compassionate” from the pro-life /Save8 side that had lost the moral high ground.

In an attempt to air the views of the opposing side, the filmmakers give voice to the Save8 campaign, but the hardworking Together for Yes team are the heroines. Although we know the outcome, the film plays a bit like a court room and suspense drama. When Smyth and the other campaigners gather to hear the results of the vote, the audience is right there with them in a euphoric finale.

The 8th is a moving tribute to the fallen, and a celebration of positive change and the power of women to bring it about. But its release in the same week that the US Supreme Court has agreed to hear a challenge to Roe v Wade reminds us that no one can be complacent when there are still countries that subjugate women with draconian abortion laws and American states that want to bring these laws back.