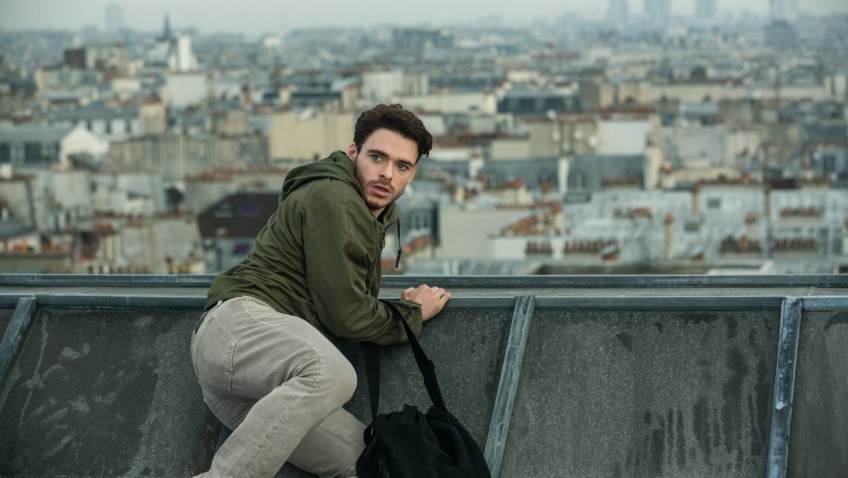 There is an astonishing scene in Bastille Day where a bomb, concealed in a stuffed animal inside a bag, detonates, killing four people in a picturesque Parisian square.  The American pickpocket and conman Michael Mason (Richard Madden) who had snatched the bag, and, finding nothing but a phone and toy inside, discarded it, is blown to the ground. When he stands up there is no sound, reflecting his momentary deafness.

The eerie stillness spread to the cinema where you could hear a pin drop.  It was just five months ago when a similar act was played out for real in Paris. This scene is an anomaly, however, as English Director James Watkins’ action/adventure/mismatched buddy movie is closer to 48 Hours, Frantic or Frenzy than it is to The Hurt Locker, Munich or The French Connection. The film opens with Michael on the steps of Sacré Coeur in Montmartre staging an elaborate stunt to distract a crowd of camera-snapping victims.  At the same time a middle-class revolutionary, Zoe (Charlotte le Bon), has been persuaded by her boyfriend to plant a bomb in a union building where no one will be hurt.

But things go terribly wrong when Zoe realises the cleaning crew had been forgotten and she runs out with the bag.  Meanwhile, Michael trots off to Barbès where Baba (Eriq Ebouaney), a family man who deals in stolen passports and counterfeit goods, makes Michael an offer for Japanese passports, sweetening it with some Lacoste shirts. ‘The crocodile is backwards,’ Michael informs him, rejecting the offer.

In her Paris headquarters, CIA Bureau Chief Karen Dacre (Kelly Reilly, underutilised) watches the CCTV footage which reveals Michael’s face.  Karen’s counterpart in French intelligence, Victor Garnieux (Jose Garcia), is going through the same exercise.  Zoe’s identity proves more of a problem, but it’s cherchez la femme for both the French and Americans, who, at this stage, are not sharing information. Garineux despatches rogue police agent Rafi Bernard (Thierry Godard) to find Michael, who is assumed to be working with the bomb girl.  Meanwhile, loose cannon CIA field agent Sean Briar (Idris Elba) also sets out to find Michael.  In the background, unprovoked raids on mosques in association with the bomb are succeeding in inciting riots in the city.

Andrew Baldwin’s script sets up a labyrinth of criminals, swindlers, forgers, secretive agents and corrupt officials all of whom, with the exception of Sean Briar, are masters of deceit.  In the midst of this chaotic minefield, Sean and Michael find themselves unlikely allies working toward a common goal for very different reasons.

If Baldwin’s script begins with prolonged expository dialogue and becomes increasingly far-fetched and silly by the time we reach the Bastille Day celebrations, Director James Watkins stages some of the best action scenes of the year, brilliantly shot by Tim Maurice-Jones.  Watkins has already proven himself a master of tension in The Lady in Black and in his terrifying debut, Eden Lake, which he also wrote.

Watkins says he is influenced by Hitchcock, an influence that was absent from Eden Lake until the very end, when a shower scene has a similar effect to that in Psycho.  The thrilling, vertiginous roof top chase in Bastille Day might be a nod to Vertigo, but it also competes favourably with anything in Bond, or Matthew Bourne’s escape through the roof tops and windows of Tangiers.

Equally impressive is a bust up in the rear of a police van, so expertly shot that despite the presence of several characters all fighting at once, you can make out exactly who is doing what to whom.  You can’t imagine where Maurice-Jones positioned the camera. Slower paced action sequences are no less skilfully directed. One of the best takes place when Michael, who is unknown to Zoe’s revolutionary group, goes into a bar with the aim of finding Zoe, who is not among them.  He figures her address will be somewhere on the leader’s person and uses his pick pocketing skills to start a brawl while he finds what he needs.

The Hitchcock debt looms large in the character of Michael Mason. Michael, albeit by his own illicit game, finds himself in the wrong place at the wrong time.  The irony is that to prove to the CIA agent that he is not a terrorist, Michael must convince Briar that he is good enough a pickpocket to have accumulated the rolls of cash strapped to his waist.  Michael has duped hundreds of people and mingles with the rough community of Barbès, but when interrogated by Sean on terrorist charges, we see the frightened son of a gambling father and broken home break down in tears.

Despite Idris Elba’s credentials from the BBC series Luther, Elba is not a natural as CIA field agent Briar, and the chemistry between Sean and Michael is just strong enough to add some requisite comic touches to a film in which two jarringly violent scenes are out of keeping with the overall tone of the film.

Whether or not this duo can sustain another mismatched buddy movie, they help make Bastille Day an entertaining way to spend a Saturday evening.