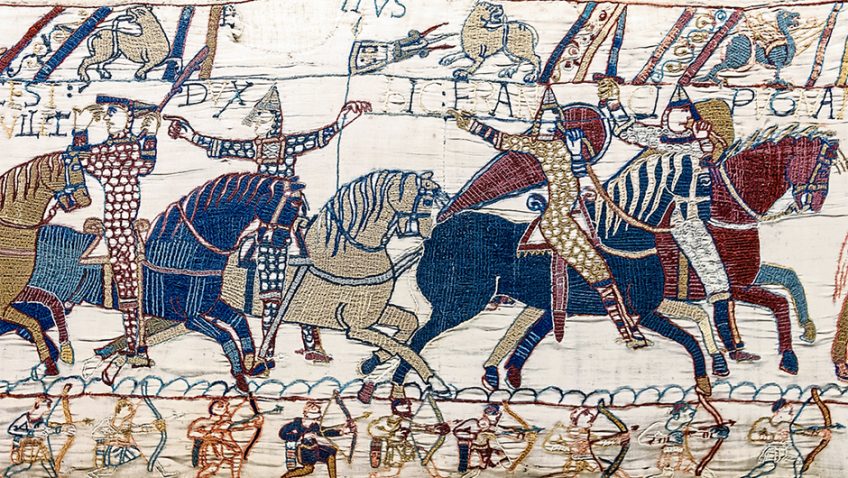 Tapping in to tapestry weaving

The impending loan of the Bayeaux Tapestry to the UK from its home in France got me thinking about tapestry, one of the oldest forms of woven textiles. However, many experts will tell you that the Bayeaux Tapestry is actually a piece of embroidery and not a tapestry at all. So what’s the difference? Basically, a tapestry is woven on a vertical loom and embroidery is where thread is hand sewn onto a ground fabric to form a picture or design. Whatever skill was employed in its creation, the Bayeux Tapestry is still a remarkable piece of 11th century fabric art. 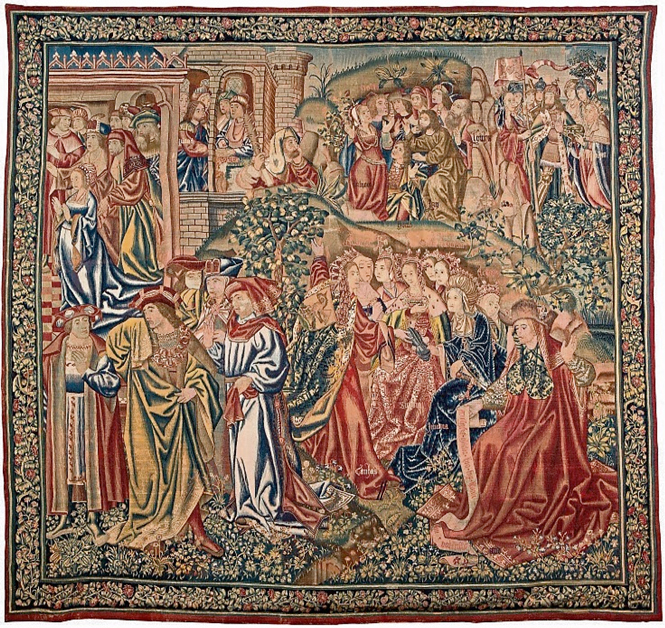 Tapestry weaving in medieval Europe was a highly regarded craft. Skilled weavers worked for many months and sometimes years, on large and colourful tapestries for very wealthy clients. When you consider that tapestries are worked on the reverse side, it’s remarkable to think that the weavers would not have seen their work until the whole thing was completed. The image we have used with this article is the ‘The Anglesey panel – Virtues Challenge the Vices as Christ begins His Ministry’. Measuring approximately 14 feet x 13.5 feet, it is an impressive and splendid example of early 16th century Flemish tapestry. The panel was substantially re-woven between 1951 and 1967, and has been on display at Hampton Court Palace almost continuously since then. The illustration appears here by the kind permission of the Historic Royal Palaces.

Tapestry on the move

As well as wool and silk, it wasn’t at all unusual for gold and silver threads to be used. Tapestries were definitely home décor for the very rich and many wealthy and powerful families hung tapestries on the walls of their great houses and palaces as displays of wealth, as well as to keep out the drafts. Despite being large, tapestries were frequently rolled up and moved from one house to another as the family moved around their estates. Designs included religious scenes; allegorical representations of virtues and sins; scenes from mythology and hunting scenes. Whatever the scene, the designs were usually colourful and eye-catching and often conveyed hidden meanings.

Tapestries as home décor continued to be popular up until the mid 18th century. After falling out of fashion, the emergence of the Arts and Crafts movement in the UK in the mid 19th century saw a revival, and the designer William Morris made a number of tapestries based on cartoons by Edward Burne-Jones. 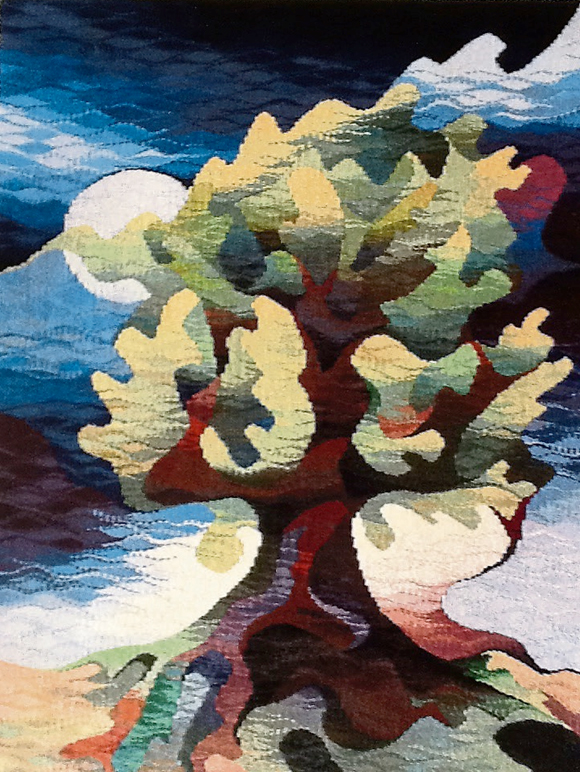 Oak In Moonlight by Michael Crompton

Today, professionals and hobbyists alike practise tapestry weaving across the UK. The traditional fibres of wool and silk continue to be used, together with cotton and other more modern materials. Techniques are varied, ranging from those from the medieval period to individual techniques developed by craft weavers and contemporary tapestry artists. Looms vary in size, with home looms being small enough to use on a table top or held in the hand. Many find working on a tapestry, either from a kit or their own design, rewarding, relaxing and a great way to develop their creativity. The illustration of ‘Oak In Moonlight’, a wonderful example of a modern tapestry by Michael Crompton, appears here by kind permission of the artist.

If this form of fabric art appeals to you, you can buy kits and tapestry equipment from good craft shops and online suppliers. There are a number of courses available, both online and face-to-face, at varying cost; you may find a local class or group in your area – check your local press or library notice board.

Getting to grips with the warp and the weft can give you the skills to create something unique and meaningful and help keep this ancient skill alive.