Home / LIFESTYLE / REVIEWS > / THEATRE REVIEWS / ‘A study in sustained terror’ it is not. 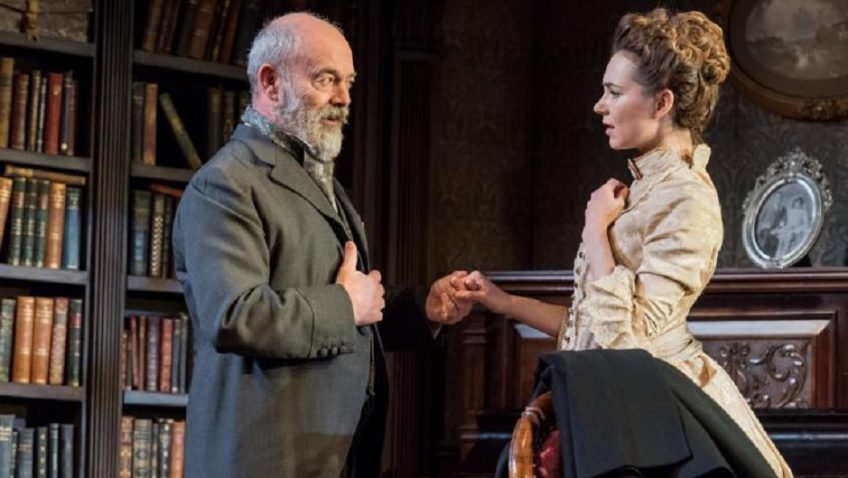 ‘A study in sustained terror’ it is not.

The star of Gaslight is decidedly the ceiling! Arranged at a perspective-defying, distorted, discombobulating, even appropriately mad angle, it opens up our view into the gas-lit, middle-class, Victorian drawing-room, where the entire drama is enacted.

Patrick Hamilton’s 1938 play, made into two films in the 1940s and set in 1880’s London, was called at the time, ‘a study in sustained terror’, a portrait of innocence menaced by evil. It’s a psychological thriller in which genteel, innocent young wife, Bella, comes under the coercive, cruel control of her manipulative husband, Jack, a man obsessed with achieving his own ends at all costs, including the psychological abuse of his wife.

This production, alas, packs no thrills or chills, and it struggles (weakly) to settle into any particular genre or to create a successful blend of genres that work in a cohesive, effective way. The several sudden apparitions, flashing lights and throbbed music bring giggles and tuts rather than heightened tension, while there’s a lack of careful crafting of relationships and chemistry between characters. With characters and relationships that show no development, the piece does become rather static and pedestrian.

Kara Tointon, as Bella, presents a single-faceted character, broken from start to finish. Distraught, distressed, distracted and annoyingly slow-witted throughout, her speech tumbles out always, always in bewildered, hesitant, anxious bursts  – as if semi-inebriated, perhaps, by the medicine forced on her by her husband. That’s the way she starts; that’s the way she stays, without nuance or development.

While the relationship of Bella and husband Jack (Rupert Young) is not crafted with sufficient impact and conviction in the initial scene to set the whole thing on course, revelations in the plot don’t carry enough impact either. We never witness Bella puzzled, alarmed, terrified by the sudden dimmings of the gaslight. There’s no build up to a startling revelation that might shock and thrill. Bella has the explanation all worked out for herself in act one.

Keith Allen’s gentle comedic input, thrown in at odd times, is certainly a welcome pep-up, but it’s not echoed elsewhere, nor is it in keeping with a thriller mood (if we had one). Yet the piece isn’t played out as overblown melodrama, either. The main mysteries seem to be – just why did Allen’s accent as ex policeman, Rough, swap from well-spoken to Cockney, and how come he can spot a secret door in a bookcase with just a cursory glance?

All the same, many members of the audience enjoyed it, booing the baddie husband at the end and cheering the wife.

The show moves on next to Malvern, Richmond and Cardiff.