Home / SLIDER / Anything Goes at the Crucible 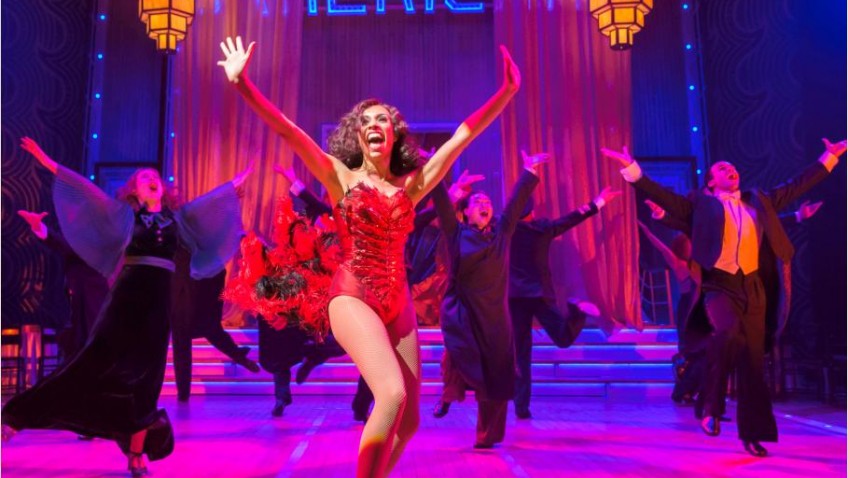 Anything Goes at the Crucible

Eileen Caiger Gray reviews ANYTHING GOES at the CRUCIBLE, SHEFFIELD

Divine art deco lines and curves, superbly lit, shine sublime to sweep us aboard the SS American, where every elegant, flowing frock, every graceful sailor suit, is to die for. Now cue classic songs, exciting choreography, romance in triangles, slick comedy and ridiculous farce involving dogs, priests, gangsters, disguises and mistaken identities, then sit back and bask in sparkling spectacle.

Cole Porter’s Anything Goes has been revived, revised and rewritten at various times during the past eighty years since the original P.G.Wodehouse-Guy Bolton book was produced, yet even in the twenty-first century, it still burns bright, bright, bright. After all, what’s changed? Shares still go down as well as up; being in the company of celebrities – even dishonest, despicable ones – is still considered more desirable than being with ordinary people, and money still wins all manner of favours.

The big winter extravaganza is fast becoming a tradition at The Crucible, thanks to director Daniel Evans, and the biggest hit of this show is wiry, moustachioed Stephen Matthews in his endearing Wodehouse-Coward incarnation as wealthy, upper class English twit, Lord Evelyn Oakleigh. His tango in big underwear and sock-suspenders just about brings the house down as he performs The Gypsy in Me. Fine comedy comes too from Hugh Sachs, in Stubby Kaye mould as gangster Moonface Martin, with gun in violin case (of course!) and from his highly entertaining broad, Erma (Alex Young).

Richard Kent’s fabulous set, with its soothing shimmer of ocean, allows clean, simple scene changes to take us into cabins, brig, bar and dining room, then back on deck in a trice to Fred Astaire dance set, complete with steps. Like the twelve-man backing band’s music, the ensemble work is outstanding, both vocally, and also in the superb execution of Alistair David’s imaginative choreography, a synchronised swimming routine proving particularly fascinating. The big finale to Act I is not just delightful and delicious, but absolutely stupendous.

It’s true the romances and big numbers bring a little less conviction and specialness than we might hope for, but the on-off romance of Easy-to-Love Hope and Billy does head broadly in the right direction for becoming delightful, delicious and de-lovely, while Debbie Kurup, as Reno Sweeney, really comes up trumps in her mighty rendition of Blow, Gabriel, Blow, backed by a devilish dance routine from the girls in red.

The show remains at the Crucible until Sat Jan 17th, then tours nationally to more than thirty locations until Oct 2015, starting in London and finishing in Bristol.