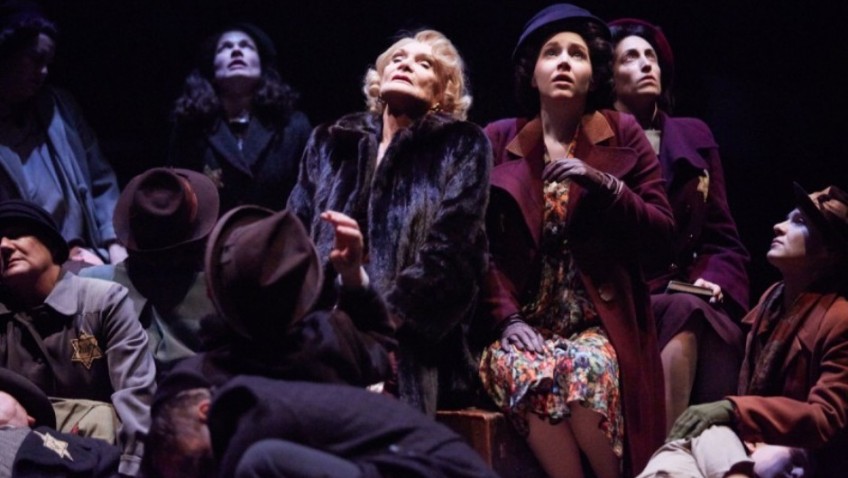 A compelling performance from Sian Phillips

It’s a hundred years since Arthur Miller was born and seventy years since the liberation of Auschwitz. To commemorate both the Crucible presents Miller’s gruelling stage drama, Playing For Time, based on his 1980 screenplay starring Vanessa Redgrave. Onstage, it’s the formidable Sian Phillips who takes the main role of Fania Fenelon.

Fania, real name Fanny Goldstein, born to a Jewish father and French mother, was a trained musician and cabaret singer in Paris, transported to Auschwitz following her activity in the Resistance. It’s her diaries and 1977 autobiographical memoir that form the basis of this play that depicts the struggle for survival and self-justification of a group of women forced to play and sing as ‘orchestra girls’ for their Nazi captors. Having music played as victims were marched to the gas chambers was a widespread practice, devised by the Nazis to help strengthen them in ‘their work’, while the musicians, spared death to do this, were despised by fellow prisoners.

A vast, intense, stark greyness covers the thrust stage on Ti Green’s set. Dark, bare trees tower behind, and bare, dim light-bulbs hang overhead, as the audience looks down into a shallow, claustrophobic, grey pit, set below a bleak, grey perimeter where guards strut and inmates scuttle. Here the women live their lives, struggling to maintain the will to survive, while beset, too, with dilemmas, worries, bickering and fallings out at a personal level.

Now (most incredibly) in her eighth decade, Sian Phillips gives a most compelling performance as Fania. Her elegant, chiselled features, distinct delivery and powerful, yet calm, stage presence allow her to play convincingly both the younger Fania and the older one, looking back as she narrates her story. Following her Oscar Wilde comedy role, Phillips decided ‘the less acting the better’ was right for this character. And it is.

Transforming onstage from fashionable singer into cowering prisoner, her head brutally shorn, filled with despair, she fights to retain dignity and self-respect, to not be dehumanised as she attempts to hold everyone else together. She believes no one’s defined by a label, be it musician, lesbian, Jew, half Jew, Aryan or any other. Humanity is diverse and being a person is all that counts.

As in life, the onstage group of cowed, desperate women of differing talents, dressed in colourless rags and boots, their hair shorn cruelly off, provide music on a hotchpotch set of instruments- harmonica, flute, violin, drum, accordion, cello and piano. Though music brings them together and helps them get through, their constant dilemma is that the better they play, the more they assist their captors in running their death machine.

Sian Phillips, a singer in her own right, brings deep tones to cabaret songs and Madame Butterfly alike, their words carrying poignant meaning. Melanie Heslop adds sweeter tones as Marianne, the young innocent girl who descends into prostitution and eventually into brutality and heartless treachery in her fight for self-preservation whilst asking: who is fit to judge? As unbending, relentless conductor, Alma Rose, niece of Gustav Mahler, Amanda Hadingue brings the first act to a close with a sad, beautiful, uplifting violin solo.

Sound and lighting are wonderfully handled to create the rumbling transportation train and various terrifying, chaotic disruptions of torchlight, flashlights, whistles, dogs, gunfire and air raids. While the women’s fear, despair and helplessness pervade, no palpable atmosphere of menace comes from those playing the soldiers, and the true horrors of endless arrivals and departures, of escapees who are captured and hung and of chimneys and smoke are also kept ‘outside the window’.

It is, in fact, during the final scene that the full impact of all that’s gone before really hits home with force. Fania, slowly transforming before our eyes, changes once more into elegant clothes, puts on lipstick and moves into a different world thirty years on. As the bright glitter of a chandelier descends and a whiteness of cloth spreads across a restaurant table in Brussels, we heave a genuine sigh of relief that the nightmare is over. We too have escaped and can breath again. Order and politeness return as Fania meets two fellow survivors, Helene and Liesle, and requests the waiter bring them ‘something absolutely extraordinary’. And that’s what we’ve all just witnessed.

The play runs at The Crucible until April 4th