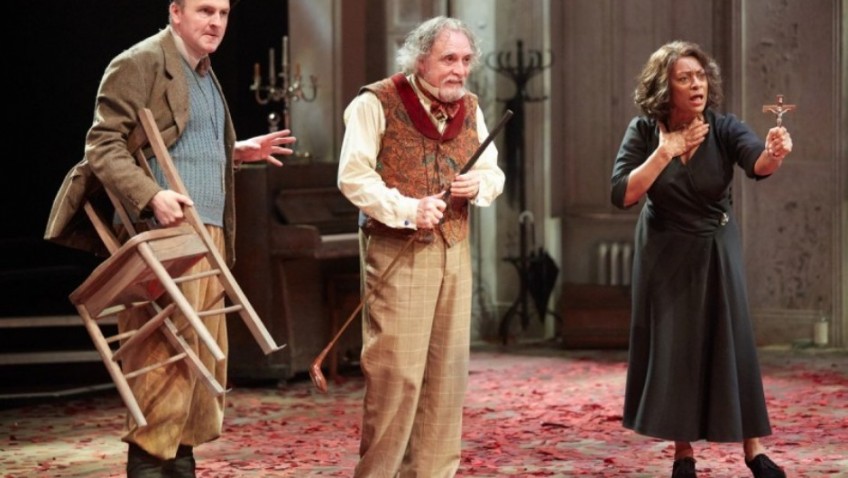 Music the food of love in Twelfth Night

Music being the food of love, of drunken revelries and of dramatic mood, Jonathan Mundby has made his English Touring Theatre production of Twelfth Night rich in it, and Grant Oldings specially composed score is full of delights. Superbly haunting melodies crop up along the way while dramatic music brought in at some scene ends to add drive and pace (a la Downton Abbey) or as romantic backing to some speeches, albeit good, is thankfully not overdone.

Unusually, it’s Feste the Fool who opens the play and eventually comes full circle to close it. As thunder booms and lightning flashes on shipwreck, his Irish folk song confirms for sure that The Rain It Raineth Every Day. Brian Protheroe pleases tremendously with his splendid musicianship on acoustic guitar, piano and vocals, and also with an endearing characterisation of Feste in which he brings out nicely the wisdom of the fool, now a long-haired, unkempt, Irish traveller man.

Like the phonograph, the costumes point towards the 1900s with Sir Andrew Aguecheek in “anyone for tennis?” garb and Sir Toby looking like the Carpenter without the Walrus. Twins Viola and Sebastian, in non-specific army uniforms, are close enough in appearance to reasonably convince us of their mistaken identities and make the most of the humour that brings. Rose Reynolds provides a strapping, earnest Viola/Cesario while Rebecca Johnson hams it up for extra comedy as a sensual Olivia who falls for the lass in man’s clothing, and Dona Croll plays Maria strong and solid. Milo Twomey’s Sir Andrew is a rather likeable twit with a hint of Rik Mayall, David Fielder’s Sir Toby a fine stumbling drunk, less bawdy than some. Jake Fairbrother cuts a handsome figure as Duke Orsino (almost morphing at one moment into Yul Bryner in The King and I) and Hugh Ross, as duped and deluded Malvolio, actually looks quite smart in flapping shirt and yellow socks held up in Eric Morecambe mode by gentleman’s suspender garters.

Colin Richmond’s set, like the costumes, works well. Tall casement windows and shutters of cream wood dominate the back of the stage, the walls tattered and uncared for by their separate mourning or lovesick owners, a chandelier discarded on the floor. Great use is made of these long windows and of a moveable wardrobe to provide ghostly entries and exits as if from another world, the wardrobe also becoming a terrible, barred prison for Malvolio. While kissing is full lipped, most surprising in the case of Antonio’s updated affection towards Sebastian, disconcerting amounts of red rose petals fall at every opportunity, not only from above but from the bosoms and underpants of anyone and everyone in love, becoming so profuse that the stage eventually resembles a bloody battlefield.

Though characters and relationships don’t, perhaps, all operate at full spark, this is a pretty pleasing and fascinating production, most especially in the music, food-of-love department.

The piece plays at the Crucible until October 18th, then in Blackpool, Watford, Cambridge, Cornwall, Richmond and Brighton.