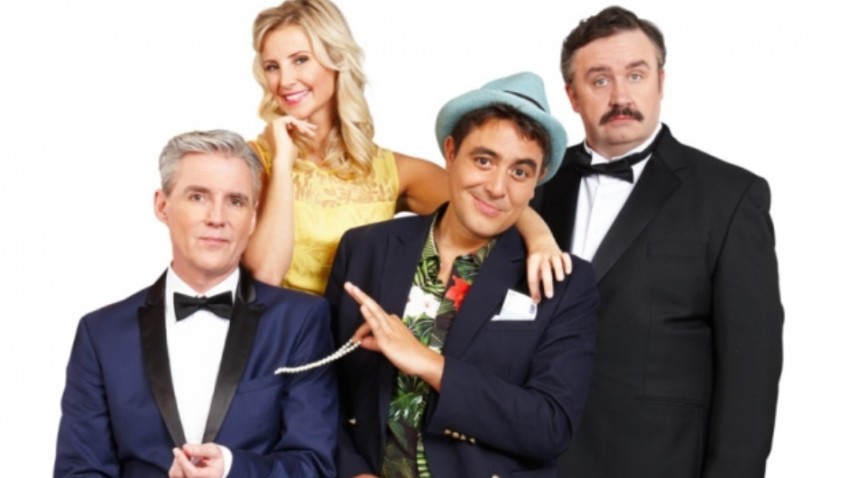 Slick and polished performance from the Dirty Rotten Scoundrels…

This production of Dirty Rotten Scoundrels is a heap of riotous fun, most especially in the second half. The whole thing clicks thanks to a cast that radiates stage presence, charm, charisma and all round special chemistry. OK, one might question why a movie with great storyline full of intrigue and humour (both subtle and less subtle) should be turned into yet another musical rather than into a fine comedy drama, but given that it has been, this version is a winner, enhanced by fabulous singing voices, brilliant musicianship (oh, that octave-soaring trumpet!), by a gorgeous set, and by elegant costumes galore.

The broad, handsome art deco set takes us to a crisp, bright French Riviera of bygone years, while scene changes roll in with smooth elegance. The energy of the hard-working ensemble, decked out in an ever-changing array of fabulously-fitting outfits, is a joy – from singing-dancing bell-boys, sailors and railwaymen to cavorting, bare-buttocked French maids, wealthy, sparkly-frocked tourists and hoe-downing cowboys and girls.

David Yazbek’s songs might not have you whistling your way home, but the fulsome orchestration, conducted from the keyboard by Ben Van Tienen, is mighty indeed, and tremendous voices from lead roles, in solos and in harmony, certainly get the most from them.

Noel Sullivan comes close to stealing the show, though others are not far behind. His singing is massively good while his mastery of comedic facial expression adds another element to his fine comic acting as slouching, laidback, would-be conman, Freddy Benson, also posing brilliantly as loony weirdo Ruprecht and wheelchair-bound US sergeant. He brings to mind Jerry Lewis with a hint of Mr Bean, and his joy is infectious both onstage and off.

Guest star Mark Benton is similarly a crowd-pleasing favourite. His fine acting and singing and wonderful sense of comedy also deserve their loud applause. The romance between his French-accented character, Andre, and the worthy Muriel(beautifully played by Geraldine Fitzgerald) – something absent from the film – is a rather lovely addition. His corpulent girations are hardly a thing of beauty, it must be said, but they raise appropriate belly laughs in various quarters.

More hearty laughter results, too, from the energetic, whacky performance of Phoebe Coupe as brash, zany Oklahoma heiress and hoe-downer, Jolene Oakes. She knows what she wants and generally gets it, very nearly bagging even suave conman Lawrence Jameson, played by Michael Praed.

As cool, confident narcissist Jameson, Praed also does a fine job, his interactions with Sullivan, Benton, and with Carley Stenson as Christine Colgate, all working a treat, while Colgate is yet another whose acting and singing sparkle and impress.

This cast brings us a show that’s slick, polished and lots of fun. It tours next to Torquay, Edinburgh, Milton Keynes, Bristol, Wimbledon and Woking.