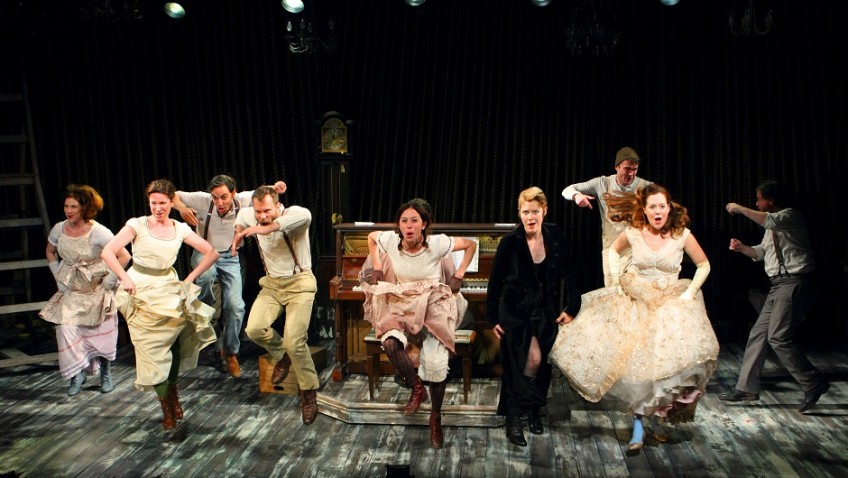 I think one thing is certain in these uncertain Brexit times and that is that David Babini, artistic director of the highly successful  Menier Chocolate Factory Theatre, can be relied on to revive a Stephen Sondheim musical and cheer us all up.

Into the Woods is as regularly revived as Sondheim’s Sweeney Todd. Recently, there has been a chamber musical at the Donmar Warehouse, a full-scale production in the Open Air Theatre in Regent’s Park and a major film with Meryl Streep.

And now there is a stripped-down version by Fiasco Theatre, an American company, who deliberately chose the name Fiasco to remind themselves to be always brave and risk a fiasco.

Noah Brody and Ben Steinfeld’s intimate and playful production concentrates on actors, text and story. Their version will appeal most to Sondheim aficionados who have  seen Into the Woods before and know what is going on. There are ten actors and a pianist. There is no orchestra. The actors are their own musicians.

How do you like your fairy tales? Whose versions do you prefer? Is it those by Charles Perrault or those by the Brothers Grimm?

Into the Woods is a sophisticated musical for sophisticated adults.Sondheim’s lyrics are so deft you come out of the theatre wanting immediately to be able to read them

James Lapine, who has written the book, has invented a new fairy tale.

A baker and his wife are cursed by a wicked witch to be childless. But she says she will lift the curse if they can get her a cow as white as milk, a cape as red as blood, hair as yellow as corn and a slipper as pure as silver.

The baker and his wife go off to the woods and find Little Red Riding Hood, Cinderella, Jack (of the beanstalk fame) and Rapunzel. The familiar fairy tale characters collide and interweave. Their individual stories “end happily ever after” by the interval.

Sondheim tells an amusing anecdote how a San Diego matinee audience thought the musical was over and exited the theatre and had to be called back by the management.

The second act is the more serious and certainly the better act on this occasion.  It’s dark, bleak and very, very Grimm.

All the characters are forced to face the result of their actions (theft, lies, self-interest, adultery) and they are killed off one by one by the mother of the giant (killed by Jack).

Fiasco fields a fine ensemble, led by Ben Steinfeld and Jessie Austrian who are cast as the baker and his wife. Emily Young doubles as Little Red and Rapunzel. Patrick Mulryan as Jack and Vanessa Reseland as the Witch (and especially in her big show-stopping number in the second act) register strongly.

The cow, as played by Andy Grotelueschen, becomes a major character in its own right and very nearly has a heart-attack when it thinks the baker is a butcher.