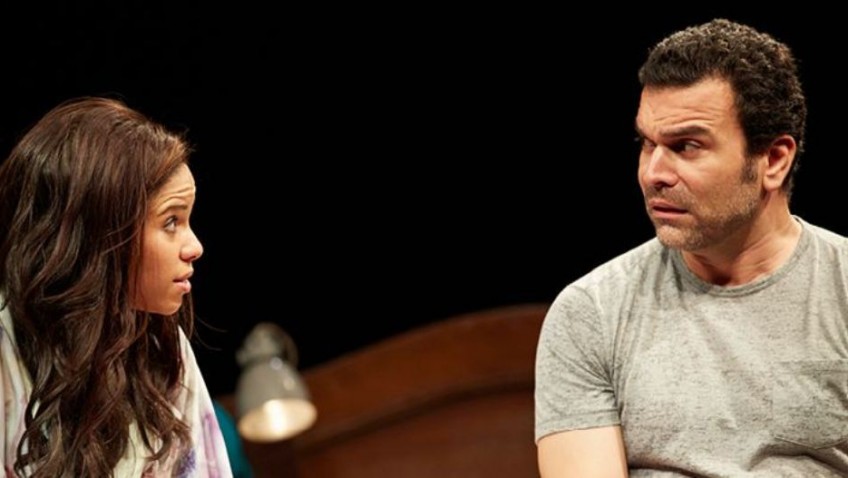 Stephen Adly Guirgis throws his ******* hat into the ring

The title of the play is going to cause problems and the blacking out of part of it on underground posters so that it reads The Mother with the Hat or inserting two asterisks is not going to make any difference.

Stephen Adly Guirgis, who was educated at a Catholic school in Harlem, writes about drugging and drinking, friendship and betrayal, and raging relationships.  He writes about people in pain. The characters, who live in three different Manhattan neighbourhoods, lead messed-up lives. Their language is gutsy, urban, working-class and, as you might easily guess, expletive driven; but not any the less ******* serious for that.

A Puerto Rican (Ricardo Chavira), having just served a 26-month prison sentence for drug dealing, discovers that his long-term girlfriend (Flor De Liz Perez), an addict, has been sleeping with somebody else. The giveaway is a male hat in her apartment.

To whom does the hat belong? What will he do to the person who owns it?  He has a moral code by which he tries hard to live. Can he fix the relationship?

He thinks his AA sponsor (Alec Newman), who is an unhappy relationship, is his best friend and is disillusioned to find he is not. He has a cousin (Yul Vazquez) who goes to the gym to be literally fighting fit. He offers him healthy food, massage and advice.

Show me how to live, he begs at one point. The answer is life is tough and that he has to accept lovers cheat and get over it. In the end does it really matter if his girlfriend has slept with somebody else?

The play should probably be staged in the more intimate space of the Dorfman Theatre but Robert Jones has solved the problem of what to do with three tiny apartments in the vast Lyttelton in an arresting way.

Indhu Rubassingham directs a strong mixed American and British cast and they are all so good. The charismatic Chavira is particularly striking and gives a terrific performance.