Home / LIFESTYLE / REVIEWS > / DVD REVIEWS / “Spotlight” is, surely, the Best Film? But will it win an Oscar? 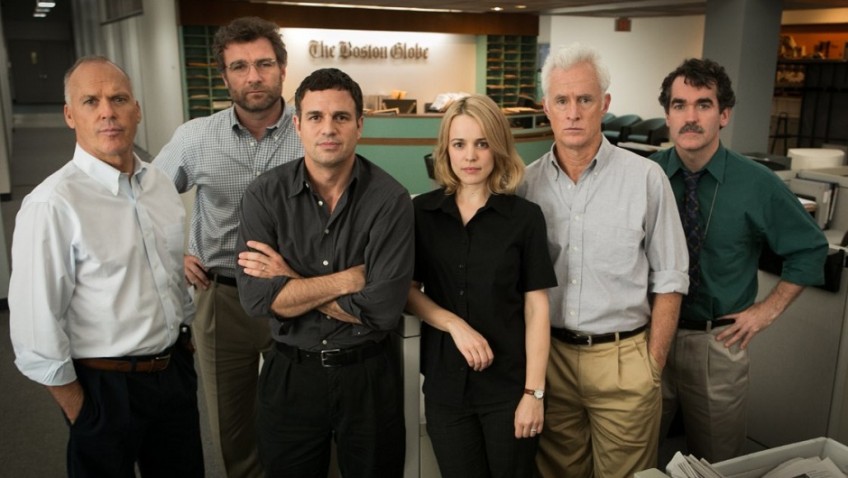 “Spotlight” is, surely, the Best Film? But will it win an Oscar?

SPOTLIGHT (Open Road). Boston priests have been molesting children for years and getting away with it. It’s a big psychological problem and it has been kept under wraps. The abuse is both physical and spiritual.  The Boston Globe decides to expose the cover-up by the Boston Archdiocese and sue the Catholic Church. The editor wants to focus on the Institution rather than the 90 individuals. Tom McCarthy’s film, directed and shot in a sober documentary manner, is totally engrossing; and the best thing of its kind since All The President’s Men.  The excellent cast includes Mark Ruffalo, Michael Keaton, Rachel McAdams, Billy Crudup and Stanley Tucci.

A WALK IN THE WOODS (Entertainment One). The no longer young Robert Redford (but still remarkably good for 79) and the 74-year-old Nick Nolte (who looks even older and in worst condition) go for a hike (2,118 miles) on the Appalachian Trail. “Try not to die,” says his wife (Emma Thompson).The trail is OK. The company, the script and the events are terribly heavy-handed and boring. The journey, never believable, doesn’t go anywhere, which may be the point of the exercise. There is meant to be one moment of danger but nobody takes it seriously and the rescue takes place off-screen. What a cheat! Redford had wanted Paul Newman to be his companion but unfortunately he died.

SLEEPING WITH OTHER PEOPLE (Icon). The film thinks it’s a modern When Harry Met Sally for the 2010s. Jason Sudeikis and Alison Brie (as two sex addicts) behave as if they are in a raunchy rom-com TV series. The couple lost their virginity together at college. They decide, when they re-meet in their thirties, to embark on a platonic relationship whilst he continues to be a womaniser and she is having an affair with a married doctor. Leslye Headland writes and directs. The screwball comedies of the 1930s did this sort of thing with much more wit and style and certainly would not have included a graphic sex lesson with the aid of a bottle.

THE SOUND OF MUSIC LIVE (ITV Studios Global Entertainment) The musical felt old-fashioned at its premiere in New York 1959 and it didn’t get a good press. But it has always been popular with the public who love the schmaltz and cute children singing Do-Re-Mi can be (when properly staged) irresistible. Kara Tointon is Maria. Julian Ovenden is Captain Von Trapp. Maria Friedman is the Abbess who recommends we climb every mountain. But what is the point of doing Rodgers and Hammerstein live on TV where it has to compete with the definitive 1966 Julie Andrews movie which was filmed in the Alps and Strasbourg? And even more so what is the point when the present studio-bound production is so wooden and so artificial, the choreography so amateurish and the camerawork so dull?